Greed Might Not Be Good But It Must Be Protected 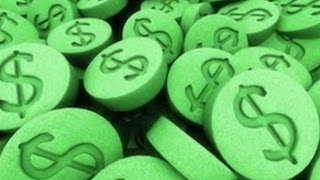 After everyone else had already done the hard work for her and after she had been conspicuously silent, Megan McArdle finally came up with a post on Mylan and the EpiPen. It took a threat from Hillary Clinton to get her to respond; she was uninterested in discussing Mylan until it looked like the government might actually do something about drug company price gouging. Hurry, McArdle! A corporation needs protection!

McArdle begins her little plea by telling her readers that if they don't know about EpiPen they must have been living under a bushel. (Or they must read her column.) McArdle, however, knows everything and now that someone else has reported, digested, and printed the information, she is here to tell you all about it.

McArdle flatly states that greed made Mylan raise prices. Actually, a person raised prices, a person who should be unable to go out in public without hearing hisses and boos. McArdle usually adores talking about CEOs and their brilliant business skills but for some unknown reason she does not discuss Heather Bresch herself.  McArdle explains that the reason Mylan raised prices was the lack of competition, and because the FDA made it too difficult for competitors to get to market.


These artificial barriers to entry are why we keep seeing huge price spikes for various drugs. Now, it’s worth noting that these spikes don’t necessarily last very long. With the exception of some new, expensive and very valuable drugs, such as Opdivo for cancer or Sovaldi for Hepatitis C -- drugs for which there isn't a good alternative -- competition eventually becomes a problem for price-hiking drugmakers. Patients and doctors will eventually switch to another product if the price gets too high, and I’m sure that in the wake of all these news stories, there are now a lot more doctors asking patients whether they want an EpiPen or an Adrenaclick. Eventually, that competition should push the price down even if the government doesn’t do anything.

This paragraph is stuffed with lies and deception but it would take about two hours to research and correct every error and lie, and I have work to do. Unlike McArdle, I can't have someone else do the preliminary work for me while I drink, shop, and google my name looking for compliments, and then write up a blindly pro-free market tissue of lies and hit print.

McArdle's post(s) on Sovaldi were as filled with deception as all her other posts. The price of Sovaldi went down only after the government investigated them and mandated discounts. The drug company solution for astronomical prices is to hand out coupons, but most people would rather use coupons for things like soda and shampoo, not life-saving drugs.

But now that we know greed will check itself, what about Clinton's plan? McArdle says we should do what Alex Tabarrok tells us to do, having no thoughts of her own. McArdle also repeats her lies about drug innovation depending on the high cost of drugs in the US, because being a hack means never having to say you're a liar. Tabarrok says that we can solve these problems with FDA reciprocity with Europe. Any drugs approved there will also be approved here, and the government can temporarily buy European drugs when the price in the US to high.

These solutions would do nothing to solve the problem of greedy drug manufacturers, they would only make the greed more palatable for voters/customers. The government should always negotiate when buying drugs, but the pharmaceutical lobby is too powerful. It's odd that McArdle would ignore their lobby, as she was so very concerned with prison guard lobbies. But eradicating the problem would cut profits, so what is a Free Market Fairy to do?

As always with McArdle, the only thing that counts is eradicating regulation.


Beyond that, we should have a good long think about what the FDA does. A lot of the reason that it can be so hard to get new drugs and devices approved is that the FDA too often wants those drugs and devices to be perfect -- at least as good as anything already on the market and preferably better. And it does not really consider factors such as “It’s cheaper,” or “It will keep the other companies honest” when passing judgment.

It seems that the free market might not be entirely free after all, therefore we should continue to regulate only enough to let CEOs kill the poor and rake in billions without interference.
Posted by Susan of Texas at 8:50 AM

A lot of the reason that it can be so hard to get new drugs and devices approved is that the FDA too often wants those drugs and devices to be perfect -- at least as good as anything already on the market and preferably better.

What a stupid government program!

We need the FDA to keep companies from killing people, or adulterating products to increase profits. It probably needs to be improved to work better (like most organizations) but McArdle isn't interested in improving it.

I know Tony. I read that sentence three times and still couldn't figure out what the objection should be. Then she says they don't take cheaper into account. So is she advocating that the FDA should approve things that aren't as good as what is on the market already because they are cheaper? You want the cheaper stent with the 50% failure rate? How about an epi pen that works 70% of the time but is only $400? Does she think the FDA is just there to frustrate wannabe John Reardons?

Except the FDA does NOT want drugs and devices to be "perfect." That's just horseshit. They DO want you to show that your drug is at least as good as what's on the market in terms of efficacy for whatever condition they're treating. If the efficacy is similar to, possibly even not as high as, something on the market, but the side-effect profile is different--e.g., no black-box warning where the current standard has one, or something like that--that's also an improvement. But exactly NONE of this has to do with insisting on "perfection." what an idiot.
-narya

"The government should always negotiate when buying drugs, but the pharmaceutical lobby is too powerful. It's odd that McArdle would ignore their lobby, as she was so very concerned with prison guard lobbies."

My rwnj brother-in-law has been obsessed with unions since the 80's. His principal argument against public sector unions is that the union, when in negotiations with the gov' (at whatever level), has skin the game. The union really wants to get as much money as possible for its members. The gov't negotiators on the other hand don't have any reason to bargain hard since hey can just raise taxes. When my sister allows this conversation to continue I've asked how that is different from a company or companies negotiating contracts with the gov't.

I have yet to get a satisfactory reply to that. I am unable to keep straight when greed is good and when it is bad I guess.

Maybe she should think about patents and getting generic drugs out faster. That might be cheaper and at least as good