The Unparalled Snark Of David Weigel

To ease myself back into blogging, let's look at a comedy piece by that sly wit David Weigel, who does a dead-pan mocking of Dinesh D'Souza's fuckumentary 2016: Obama’s America.


Twenty minutes into a new conservative documentary about Barack Obama, there’s a moment that’ll break a birther’s heart. Dinesh D’Souza, the star and narrator of 2016: Obama’s America, is telling the brief, encyclopedia-entry version of the president’s life. The camera zooms over a map like one of the travel scenes in Raiders of the Lost Ark—Kenya, Indonesia, Hawaii.

“On August 4, 1961,” says D’Souza, “Barack Obama II is born in the Kapiolani Medical Center in Honolulu. His birth is recorded in two local newspapers.”

When I hear that line, my head instinctively swivels to my right, where WorldNetDaily Editor-in-Chief Joseph Farah is sitting. His website has run hundreds of stories about Barack Obama’s citizenship and birth documents. WND books published Where’s the Birth Certificate?, which unfortunately was published right after the president released the long-form version of the record. You can still buy “Where’s the REAL Birth Certificate?” merch at the WND store. And now here’s a movie with a $2.5 million budget that’s made more than $80,000 in a four-theater run that tosses all the birther theories aside.

Farah abides. He doesn’t walk out.

He's quite the brave little toaster. Or he's a cynical exploiter who plays on spite and racism to con his marks out of "donations." It may seem that Weigel is giving Farah his due, even comparing him to the unflappable Dude that Abides, but sarcasm is an elusive thing.


The movie is really too good to get pedantic about.

See? That actually seems sincere, which it cannot be. Now, watch this set up:


There are no conspiracy theories about Obama’s birth, religion, Social Security number, passport, or college transcript. Instead, there is a deep dive into Barack Obama’s known Communist associates, his late father’s avowed socialism, and his mother’s radicalism.


The first and last stories are backed up with quotes from Dreams From My Father. “That’s Dinesh,” says co-producer Doug Sain. “He walks on solid ground.”

Let’s go with “mostly solid.” D’Souza’s documentary is based largely on his book The Roots of Obama’s Rage, which itself grew out of D’Souza’s Forbes cover story, one of the most influential of the decade. Obama, according to D’Souza, was an anti-colonialist. “He adopted his father's position that capitalism and free markets are code words for economic plunder,” wrote D’Souza. “Obama grew to perceive the rich as an oppressive class, a kind of neocolonial power within America.” Newt Gingrich recommended the theory to reporters—technically speaking, to Robert Costa and me. David Koch repeated it to a sympathetic Matthew Continetti.
The theory was Swiss-cheesed with logic holes. D’Souza found great significance in how Obama “demonizes his predecessor and his opponent,” as if only anti-colonialists did this. D’Souza insisted that Obama using the Gulf oil spill crisis to call BP “British Petroleum” is Anglophobia, revealed! But Obama didn’t call BP “British Petroleum.”


Yes, Mr. Weigel,  D'Souza sure does sound illogical. D'Souza's theory is that Obama hates America, more or less. D'Souza takes every politically-motivated critical utterance as proof and, McArdle-like, ignores any evidence that directly disproves his theory. For instance, D'Souza declares in Forbes that Obama does not not believe in American exceptionalism, when Obama has said the exact opposite. Here is the question and answer from the press conference:

Q Thank you, Mr. President. In the context of all the multilateral activity that's been going on this week -- the G20, here at NATO -- and your evident enthusiasm for multilateral frameworks, to work through multilateral frameworks, could I ask you whether you subscribe, as many of your predecessors have, to the school of American exceptionalism that sees America as uniquely qualified to lead the world, or do you have a slightly different philosophy? And if so, would you be able to elaborate on it?

PRESIDENT OBAMA: I believe in American exceptionalism, just as I suspect that the Brits believe in British exceptionalism and the Greeks believe in Greek exceptionalism. I'm enormously proud of my country and its role and history in the world. If you think about the site of this summit and what it means, I don't think America should be embarrassed to see evidence of the sacrifices of our troops, the enormous amount of resources that were put into Europe postwar, and our leadership in crafting an Alliance that ultimately led to the unification of Europe. We should take great pride in that.

And if you think of our current situation, the United States remains the largest economy in the world. We have unmatched military capability. And I think that we have a core set of values that are enshrined in our Constitution, in our body of law, in our democratic practices, in our belief in free speech and equality, that, though imperfect, are exceptional.

Now, the fact that I am very proud of my country and I think that we've got a whole lot to offer the world does not lessen my interest in recognizing the value and wonderful qualities of other countries, or recognizing that we're not always going to be right, or that other people may have good ideas, or that in order for us to work collectively, all parties have to compromise and that includes us.

Obviously D'Souza is so ridiculously (and renumeratively)  biased that he chooses to ignore the truth, twisting it into a self-serving (and profitable) lie. Weigel is not a babe in the woods; he has undoubtedly heard of that press conference, if he has not read it himself--which he probably has. He is being sarcastic by appearing to agree with D'Souza. He certainly is not so stupid and self-deluded that he believes D'Souza's easily disproved lies.

None of this makes it into 2016. We’re taught the controversy, with a montage of D’Souza defending his thesis in front of hostile interviewers.


(There’s a sort of George Romero irony to these scenes, as D’Souza is filleted on shows like Countdown and Parker/Spitzer. They’re gone. He’s still here.)

Here Weigel appears to sympathize with poor, abused D'Souza, to thow those righties off the track. Hehehe, Weigel mutters under his breath. That'll fool them.


We’re shown just how deeply D’Souza researched this—shot of him thumbing through Dreams before boarding an Indonesian scooter, learning to hula in Hawaii, delivering three goats to buy an interview with Obama’s paternal grandmother Sarah. She turns him down. There is no Michael Moore-style waiting in the weeds to ambush a source.

Hahaha! Can't you just picture D'Souza putting on a fedora and assuming a Harrison Ford-ish expression as he pretends to scour Obama's bio for the accidentally revealed truth, earnestly running his finger over the text line by line, so as to not miss one misstep? And I might actually watch the movie if I get to see D'Souza hop around in an attempt to understand how the hula undermines Americanism and riding a scooter makes you a commie. I''d also like to see D'Souza tell Sarah Palin that growing up off the mainland makes you less American.

And I suspect Grandma Sarah thought D'Souza was offering marriage in exchange for goats, took one look at the gentleman in question, gently let him down by telling him to come back with more goats, and slipped out the back before he returned. 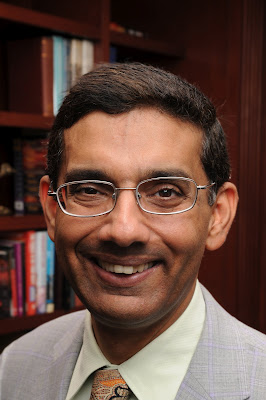 
But there’s plenty of the Moore style. D’Souza is sold to us as a smart, patriotic innocent abroad, who just wants to piece a mystery together. Almost every clue fits the puzzle. An old associate of Obama Sr. says the son and the father are basically the same.

Stop it, Dave! It's too funny.


D’Souza asks one of Ann Dunham’s professors if Obama’s mother had taught the son to idolize his father. “I hadn’t thought of that!” she says. “I think you’re right.”

I know just as much about Stanley Ann Dunham's relationship with Obama's father as the professor (nothing) yet I find her epiphany a little unconvincing. Weigel's a sly fox, isn't he?


D’Souza walks the grounds of Obama’s high school, where they teach “oppression studies, if you will.”

They also require students to attend chapel once a week, which must mean, by D'Souza logic, that they are all atheists.

Still, the Davis story is complicated. Becoming a Soviet dupe, as Davis did, meant something for midcentury African-Americans that it doesn’t mean today. Obama never pretended not to know Davis, or pretended that he was some Rockefeller Republican, or turned him into a composite character. He appears in Dreams as “Frank,” a “dashiki-wearing” friend talking “black power.” This is a movie, sure, and you can’t lard it up with every little detail, but D’Souza’s question-begging and omissions lead him to oversell what he’s got.

Weigel lists more of D'Souza's claims, stating that most of them (actually, all of them over here in Realityville) are wrong. This, Weigel says, proves D'Souza's good faith. Heh! And I thought I was good at sarcasm.


Give D’Souza some credit: He lets the audience see when he’s caught up short. There’s none of that teeth-grinding, aren’t-I-smart-didn’t-I-getcha interviewing that you catch in a doc like Inside Job.

Bravo, Dave! That is a pitch-perfect imitation of right-wing petulence when faced with liberal-biased reality.


D’Souza’s biggest journalistic coup is an interview with George Hussein Obama, one of the president’s Kenyan cousins, momentarily famous in 2008 when it was revealed that he lived in poverty. The Other Obama, it turns out, thinks that colonialists should have stayed in Kenya longer than they did.

Now, there's damning with faint praise. The "biggest coup" is a cousin who seems to favor financial redistribution, as long as he is the recipient.


“Do you really believe that?” asks D’Souza. “It’s true,” says George Obama. “They would have developed us. Instead, we were fighting over nothing!”


Alas, D’Souza wants George Obama to be angry over how his famous cousin has treated him.

He hasn’t been his brother’s keeper, has he?

“Go ask him,” says George Obama. “He’s got other issues to deal with.”

“Yeah,” says the cousin, not really interested in badmouthing the president. “He’s taking care of me. I’m part of the world.”

That’s it for cousin George. On to a re-enactment of the young Obama kneeling and bawling in front of his father’s grave. If you’re serious about re-arranging facts, hire a few actors.


Kudos to Mr. Weigel for appearing to support Mr. D'Souza while exposing the latter's bad faith, ineffectiveness, and just plain stupidity. I couldn't have done it any better myself. What could be more ridiculous than supporting the viewpoint of a person whom you have just proven wrong?
Posted by Susan of Texas at 3:07 PM 15 comments:

The Biblical definition of the family unit: 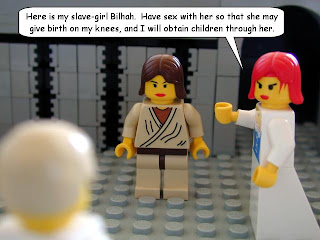 A man, his wives, his concubines, and his female slaves.
Posted by Susan of Texas at 1:08 PM 5 comments:

I did not mean to be gone so long; I had a lot of work to catch up on but, oddly, once I was caught up I became accustomed to getting work done and did not want to stop to blog. But all work and no play makes a frustrated blogger so I will try to do both.

I hear there were random shootings and Syrian violence, spending is slowing, and the boys are once again deciding if the girls belong in their club or not. So nothing has changed!
Posted by Susan of Texas at 11:04 AM 9 comments: