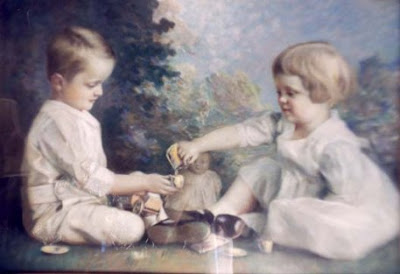 Via TBogg, we see that Ross Douthat's mother let him play with the computer again. It seems that the little girls who live next door invited him over for a tea party and he thought he was actually going to get real tea and cakes instead of water and Play-Do. So Master Ross takes pen in hand to think over the puzzling dilemma.

The Tea Party is a grass-roots movement — wild, woolly and chaotic — which sometimes makes it hard to figure out exactly what it stands for. But to the extent that the movement boasts a single animating idea, it’s the conviction that the Republicans as much as the Democrats have been an accessory to the growth of spending and deficits, and that the Republican establishment needs to be punished for straying from fiscal rectitude.

Little Master Douthat doesn't understand that a pretend tea-party is not the same thing as a real tea-party. The grown-ups have money to buy real food, and servants to give them real tea and cakes and sandwiches and little lemon tarts. The children are just pretending to have a tea party.

Their eccentric elements notwithstanding, the Tea Parties have something vital to offer the country: a vocal, activist constituency for spending cuts at a time when politicians desperately need to have their spines stiffened on the issue. But it’s all too easy to imagine the movement (which, after all, includes a lot of Social Security and Medicare recipients!) being seduced with rhetorical nods to the Constitution, and general promises of spending discipline that never get specific.


Disappointment has made him bitter.

It wouldn’t be the first time a mass protest movement won a rhetorical victory without achieving a lasting policy shift. The antiwar movement, for instance, seemed to effectively take over the Democratic Party in the middle years of the Bush administration. But here we are, two years into a Democratic presidency, and Gitmo is still open, the U.S. is still in Iraq, and Barack Obama has escalated the war in Afghanistan.

Now, that was just mean.
Posted by Susan of Texas at 9:56 AM

The antiwar movement, for instance, seemed to effectively take over the Democratic Party in the middle years of the Bush administration.

Um, WTF? I must have missed the point where the anti-war folks actually had any influence over anything in the Democratic Party.

There was that point during the Bush administration where almost everyone in the Democratic Party leadership sobered up for about 20 minutes and realized "you know, letting Bush start two wars simultaneously without any kinds of 'goals' or 'strategy' to speak of and without any way to pay for it outside of borrowing was probably a bad idea in retrospect". But then it was all "Pottery Barn" analogies and longwinded explanations about how we have to stay forever because they fucked things up.

I wish I lived in the universe where the anti-war left wrassled control of the Democratic Party from the hawks during the Bush administration, though. It certainly would be an interesting place. I imagine a Democratic Party that was controlled by the anti-war faction might just not have nominated someone for President who took pains to tell people, over and over again, that he wasn't against "all wars" just "stupid wars" and who explicitly campaigned on doubling-down in Afghanistan. That totally sounds like what an anti-war controlled party might do.

Shorter me: Douthat should stop eating the funny looking candy he finds in his mommy's medicine chest. It's causing hallucinations again.

As such, there are way too many people who do not remotely understand what is happening here. Our fighting men and women, our forefathers who gave their blood and lives for this country, they understand! Unfortunately, the folks that have either had everything handed to them or instead have chosen to ride on the back of others instead of being responsible for themselves combined with the elected morons who realize keeping people reliant on government insures their power, they do not understand!

The Tea Party movement is not a fight for the heart and soul of the Republican party! A co-opted media led by a hard core left wing wanna be dictatorship government would want you to believe that it is in fact all about the Republicans. And they would be dead wrong! The Tea Party movement is a fight for the heart and soul of our country! It is a fight to return us to what made us the greatest country in the world! How sad that entrenched politicians on the right along with the garbage on the left cannot or refuse to understand such a basic tenet!

Wow, Susan, you have your very own troll! Congratulations!

Just make sure you take it for frequent walks, or it will pee on the carpets.

Hell, its going to *eat* the carpets. Its certainly chewing the scenery.

I know what our fighting men who died for our country wanted, joetote. They wanted to know that the government would be there to look after their kids if they were killed. The same thing goes for the fathers who built our roads and cars and businesses. They want to know that if they are killed, Social Security will care for their widow and children.

Our founding fathers knew that charity was their Christian duty, and just as they were willing to lay down their lives for their new country, we must be willing to do our duty. Perhaps a little more Jesus and a little less Glenn Beck will ease your mind.

To those who believe in the hard core Marxist principles being espoused by this administration, it is a threat!

joetote, I doubt that you have the slightest idea what "hard core Marxist principles" really are. Do you think it's "Marxist" when the government bails out GM so that it can resume business and get ready for a new stock offering? That's cute.

Anyone who cites "the hard core left" in this country, from Newt Gingrich on up the evolutionary scale, hasn't the foggiest notion of what they're ranting about.

The only "subversion" from "fanatics" we have to fear is that from frothing "patriots" like your esteemed self, and from the Palin/Beck coven of demagogues they follow so slavishly.

The Tea Party movement...is a fight to return us to what made us the greatest country in the world!

* A 91% marginal income tax rate?
* The Interstate Highway system?
* The National Aeronautics and Space Administration?
* Brown vs. Board of Education?

All courtesy of the Eisenhower Administration, 1953-1960...izzat the kind of greatness you're flappin' yer teabag about?

Or are you just mindlessly repeating a Fox News talking point about some Ronald-Reagan fever-dream "America" that never was?

Because I can show you mine, and by your own argument, if you don't have one that means I understand this stuff better than you do.

And what I understand is that you people have no idea what the fuck you are talking about. You don't know the first thing about this country's history, you don't understand economics, you are completely ignorant of political philosophy. You are simply afflicted with BPDS (Black President Derangement Syndrome) and can therefore be mostly ignored, or at most, slightly patronized.

No reason to respond to joetote. I have a feeling he's a modern day e-pamphleteer, Googling blogs containing the words "tea party" to drop his cut-and-paste rhetoric in your face, whether you want it or not. He's not coming back; he's not interested in discussing these things, only emotionally invoking "our fighting men and women" and our "forefathers" in an otherwise empty statement that ultimately accomplishes nothing.