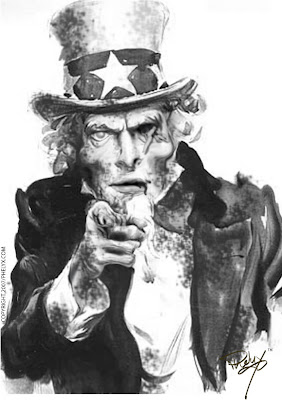 Anyone can succeed in America!


Megan McArdle is most concerned.

I doubt Occupy Wall Street will be assuaged by learning that the top 0.1% now only receive 8% of the income earned in the US, even if that number is the lowest it's been since 2003.

But I think it does matter. If we think there's a real problem, we need the best possible data so that we can understand its contours. Income inequality has been rising for so long that people have started to assume that it has just kept rising, even when the data show otherwise. We don't want to spend years focused on income inequality, only to learn that the financial crisis fixed it for us.

McArdle has taken to declaring that the Occupy Wall Street crowd is just a bunch of angry kids who can't get a job out of college but she gives herself away with this post on income inequality. She realizes that the protesters are concerned with the increasing concentration of wealth (and therefore power) into fewer and fewer hands and so she attempts to minimize inequality. America is no longer the land of opportunity and while some zombie lies never seem to die, the lie of upward mobility is finally beginning to sustain some damage. By ignoring wealth inequality and downplaying income inequality, McArdle does her very best to reanimate that zombie. 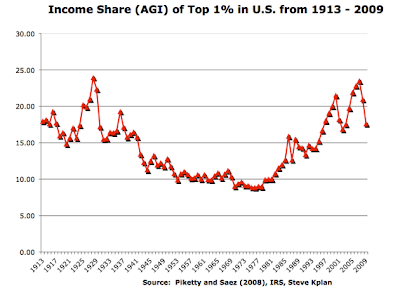 Now that McArdle has diverted attention from growing inequality, she shifts the focus to a plausible-sounding explanation for public unrest.

(If income inequality is declining, what's all that happening on Wall Street? Well, for one thing, the data I've seen seem to show that whatever has been happening to incomes, unemployment inequality remains very much with us.)


In McArdle's mind it has now been definitively established that the Occupy Wall Streeters are a bunch of bored, out of work kids who are protesting until they they find a decent job. Her prescription for dealing with lasting joblessness is a modest amount of unemployment benefits doled out to the masses. Otherwise, we should simply let the banks continue to make record profits while the middle class sinks further into poverty.

McArdle benefits from inequality; the very rich provide an inexhaustible supply of funds to keep the propaganda flowing. Incentives matter, as McArdle often tells us, and she has all the incentive in the world to downplay wealth inequality.

Why has income inequality been rising since the 1980s? 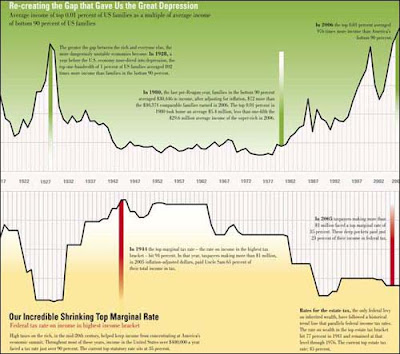 Tax rates are a part of rising inequality. Union busting, layoffs, outsourcing, the out of control system by which managers set their own compensation & the growth of the monster financial companies are bigger parts.

Megan's main line of bull is that it "just happened". Watching OWS take on the whole plutocracy, and state the obvious, that it IS deliberate, must be like the Bat Signal to Megs.

We can't really know if we should punch the man who wants granny to eat cat food. Instead we should shine his shoes.

This classic bit of idiocy deserves to be quoted in full:

"There's an obvious caveat: 2009 was a very bad year for finance, corporations, and lawyers, who drive a lot of the top income. Probably 2010 and 2011 weren't so bad, so these results may well rebound considerably when the data are in. (They also may not; I just don't know.)"

The bankers wallstreeters and various MOTUs have been planning to return the World to the "gilded age" ever since the New Deal. They focused on their goal, using any an all methods -including racism, religious mania and hate TV-Radio- to achieve their goal.

Too bad none of them seem to have given any thought to the consequences of their succeeding. Just as they can't foresee that outsourcing manufacturing jobs would cause their customer base to shrink. That having the Fed Gov subsidize Oil and other fossil fuel costs to the American people would cause enormous pollution, rage and war in the Mid-East, and a speed-up of our running out of those resources.

Greed and stupidity really do seem to go together.

I note that it is "finance, corporations, and lawyers, who drive a lot of the top income." (Um, by corporations I think she means investors.) Which means that the top income is going to useless parasites who do nothing to benefit society. At best, in their own terms, they allocate resources in order to facilitate the work of others who might, indirectly while working to maximize their own profit, benefit society. So, screw 'em.

Hell with pitchforks, let's go straight to the guillotines.

Nice Susan, but I don't think you even scratch the surface of how ludicrous McCardle's claims are here.
She says:

"The massive, decades-long data set assembled by Piketty and Saez seems to show that income inequality falls during recessions, and particularly during prolonged crises. Crises destroy capital, and top incomes tend to be more tightly linked to capital than those of average workers
Note that this is not an argument about who suffers more during a recession; it is self-evident that a worker who loses a third of their $20,000 annual paycheck is much worse off than an owner who loses two thirds of their $500,000 annual draw. But the measured gap between their incomes will still shrink dramatically.

"hat's why I was surprised, two years ago, when census data seemed to show that income inequality had continued rising. However, I filed it under "maybe this time is different" and didn't really revisit the subject."

Now it gets somewhat difficult to follow her logic here, because her writing a bit unclear. What I understand is that she's sating that she always assumed that inequality will FALL during a recession because although the working class may lose there job, they can quickly get a new one and make up for their lost productivity/earning. However, the owners, or b/c this is McCardle, the Galtian class, has to take longer to get back on their feet because they had the responsibilities of shutting down a plant/workplace and building up another one from scratch.

That's ludicrous! And as she later admits, to her surprise, her assumption is untrue, and really the wring class are the ones who lose their wealth/suffer, who the Galtian upperclass elites, far from getting soaked, are often rewarded with golden parachutes.

If this is what she's saying, then it's hard to justify why she is writing about economics in anything other than a homemade fanzine/high school newspaper.

She is utterly shameless. There's no other word for it. In another life she would have been some kind of scribe, paid to proclaim the divinity of pharaoh.

in the current post she is pissed at durbin because aadvantage cancelled her debit card and she lost all her miles and has to fly coach with her long legs and bad back dontcha know?

"I don't like using credit cards; they make it easier to spend too much, and harder to track our net worth."

Oh, but it's more insidious than that, Susan.

She knows perfectly well that income =/= earned income =/= wealth. She also knows that the income tax rates under discussion are those on earned income, not interest income on accumulated wealth or capital gains on stocks. It's in the interest of her paymasters for her to elide the differences.

It's amazing that she will go so far to tongue bathe the rich. I've never understood it.

A couple of weeks ago, I lost my debit card. Well, "lost" is a strong word. I'm sure it's somewhere in my house, but since I don't know where it is in my house, and I kind of need a debit card, I had to go into the bank yesterday and ask for a replacement.

Why does she admit these things??

"Why does she admit these things??"

why does she admit these things

Because she cannot conceive of a world in which she and her needs are not front and center all the time.