It's difficult to figure out why the push-back against Rush Limbaugh finally reached critical mass after all this time. There might be an unspoken factor behind the Rush Limbaugh self-destruction: his aging. 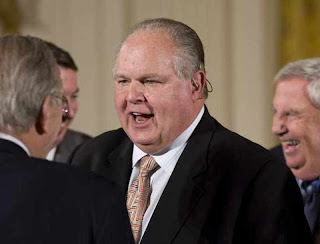 The sight of this old man demanding a young woman's sex tape is enough to turn off anyone. Followers want their leaders to be better than they are, richer and more attractive. (The richer you are the less attractive you have to be.) Once conservatives no longer want to fantasize about having your money (or you), you're toast.

And Sarah Palin is about five years away from having the same problem. When your popularity is based on a fantasy, it only lasts as long as the fantasy lasts.

ADDED: Digby discussed this as well.
Posted by Susan of Texas at 12:31 PM

I think its several things combined.
1) Critical mass of angry women from the attacks on Ellen Degeneres (which were also intergenerational and religious as well as other things), planned parenthood/Komen, the virginia ultrasound bill and then the sight of the all male congressional testimony and resurgence of memories of the pillorying of Anita Hill (for women of the age to be Susan Fluke's mother).

2) The fact that the insults jumped out of the limited pool of people who follow Rush (his listeners) and his detractors (his stalkers/media matters.)
Rush has gotten in trouble before, often deliberately in order to boost his sagging spirits and ratings. This time there was a backlash because, in some sense, a whole lot of people were primed for another example of this kind of hate talk. Rush jus tpersonified what was amorphous, before: because he's one known public figure.

I think it had been hard to successfully attack a bland and anonymous group like the "Bishops" or "those guys who testified before congress"--the very number of these guys made them a moving target.

Rush is a very big target. His very name recognition and fame makes him a lightning rod in a way that the lesser school of sprats and the actually dangerous demagogues in suits in congress can never be. You can't even remember the names and locations of all the assholes in congress and in the state legislatures that you hate for what they are doing to women. But its easy to coalesce the anger around a singular figure like Rush.

"Rush is a very big target."

"You can only jump the shark so many times."

Boing Boing has been surprisingly good about this. The guy who keeps writing the Rush posts often irritates me with libertarian nonsense; if guys like that are pissed off with how crass Rush is, then maybe the times are a-changin'. And then he quotes a Daily Beast article that calls Rush hateful.

You're wrong about Sarah. She's about 2 years past her Sell By date.

By drawing attention to his horrible statements this time people are noticing that Rush never even listened to her testimony, that he slandered her based on nothing. Maybe one or two dittobrains will wonder "if he lied about this, maybe he's lied about other things."

They all understand that Rush is ignorant & nasty. By being ignorant, nasty, rich & powerful he gives them permission to stay ignorant and nasty. That's the point.

And why it is absolutely neccessary to keep the fight going until he buckles, and then grind the boot in his neck with a condescneing forgiveness. because that's the only way to get the message across that nasty ignorance isn't really enough.

is it time yet to find a way to give Moe Nawaz the old boot in the neck?

Moe Nawaz is the next senior editor for Economics at the Atlantic.

And now, much like the old one, he is gone, at least for a while.

Hilarious McMegan Meltdown in progress at twitter. Must be seen to be believed. So much harder to pull the word salad trick on twitter, but ArgleBargle gives it a whirl after being unable to name a single climate model she objects to. Yet she's ever so upset (she's making another obfuscating tweet every minute) over his criticizing her for out-sourcing her opinions on global warming.

See @asymmetricinfo for a laugh. She's really annoyed. You can tell by all the misplaced condescension.

She "forgot" to write part two of the Elizabeth Warren takedown! I've really got to start using Twitter.