Of Cabbages And Klings 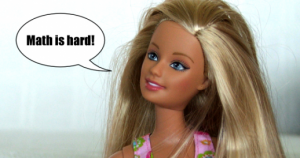 My goodness, it's been ten days since anyone posted on Megan McArdle's blog. No wonder she hunted down a few more guest bloggers. Coincidentally, both are very concerned with women and economics. Or maybe that is not such a coincidence after all; McArdle is a female and does discuss the economy. But McArdle is libertarian/conservative, so when she wants to discuss the role of women in life and economics she turns to a pornographer and an economist who thinks women aren't smart enough to be economists.

Garett Jones is an economist at George Mason University. He's a macroeconomist whose work includes the study of business cycles, and also, the study of why IQ matters more for nations than for individuals. He's also worked on Capitol Hill.

Comstock popped up occasionally at Reason due to his anti-censorship efforts, which is no doubt why McArdle knows of him. McArdle's commenters have been complaining of the site's dullness; this ought to liven the place up.

Jones has written about IQ and economics. When conservatives want to write about IQ there is usually only one reason why; they want to explain to us in scientific terms why preserving the present power structure is absolutely necessary or the economy will collapse. For most of us it already has, but just because conservative policies have already inflicted grave harm doesn't mean a little fear-mongering or propagandizing can't be used sell more conservative policies. Let's let Mr. Jones speak for himself via the abstract for his paper What Is the Right Number of Women? Hints and Puzzles from Cognitive Ability Research.

This paper comments on the lead symposium article, “Reaching the Top?—On Gender Balance in the Economics Profession,” by Christina Jonung and Ann-Charlotte Ståhlberg. Using evidence from brain scans, mental ability tests, personality tests, and DNA, I show that the representation of women in the economics profession may be largely driven by persistent differences between the sexes in the interests and abilities that make good economists. The easiest way to raise the number of women in economics may be to change economics itself so that it focuses on the actually-existing strengths of women in areas such as verbal fluidity, conscientiousness, and computation.

He suggested that in recent years, economics has become less extremely mathematical. In addition, some of the new empirical techniques may reward conscientiousness more than extreme math. Thus, women are playing a larger role.

I was born at the wrong time. I attended graduate school near the peak of ultramasculine economics (my term). The math was almost too much for me (in fact, five years later it would have been too much for me). I have always doubted the value of the theorem-proving approach to economics. I note that these days many people are sharing my doubts about the mathematical macro that emerged during what Paul Krugman calls the "Dark Age." However, unlike Krugman, I do not think that we can simply go back to old Keynesianism. I think that there were many problems with Keynesianism circa 1970 that were not solved by coming up with mathematical solutions for the Lucas critique. The Leamer "con" of econometrics problem and the "unit root" problem are what caused me to "lose my religion" regarding macroeconometric models. See my lost history paper.

Also, I spent a lot of time in graduate school thinking about the deeper issues of monetary theory and unemployment. The result is that I have always harbored doubts about the fundamental Keynesian story. Hence my interest in the alternative that I call PSST.

In any event, Ultramasculine macroeconomics is not the answer. Maybe some of who are less able to do extreme math may nonetheless have better theories.


It's not that he was fundamentally wrong, it's just that he's too much of a deep thinker.

In short, it is no wonder why Jones associates with famously innumerate McArdle, the only wonder is why McArdle handed her blog over to someone who doesn't think women have the mental capacity to think as well as men. We know that McArdle extrapolates from personal experience but it is not true that having girly parts lowers your IQ.
Posted by Susan of Texas at 1:03 PM

Gary Jones is a Koch Head. Gary's been doing what Charlie and Dave have been ordering him to do for years.

The easiest way to raise the number of women in economics may be to change economics itself so that it focuses on the actually-existing strengths of women in areas such as verbal fluidity, conscientiousness, and computation.

Right, too bad economics doesn't traditionally have an emphasis on computation or well-reasoned and expressed arguments.

tony comstock is David Ryan. you can find his glibertarian stylings at ED Kain's place, the league of ordinary gentlemen. david is a grade A douche with a recurring post series called "Thermomixed up". True story.

IRAN produces a far higher percentage of female science and engineering grads than the US.

And the worst part of economists trying to do neuroscience is them groping for gender differences in economic applications of brain function.

Basically, this is like the intellectual version of a love story in a Michael Bay movie.

The thermomixed up series is incredibly douchey

Surprise, one thinks stimulus doesn't work and the other seems to have settled into a nice, long monologue about himself. The building-a-boat part is interesting though.

boat man is only capable of speaking about himself and how everyone could be happy if they would just do what he does/did. he and gentle freddie deboer got into a tiff that i'll paraphrase thusly:
boat man: i don't get why people complain about not being successfull. just drop everything and go for your dream.
freddie: not everyone can do that because they may have financial or familial obligations.
boat man: don't be such a pussy, freddie.
freddie: not everyone is a "rich buddha" like you are.

boat man tried to apologize but it was a non apology apology. boat man was so aggrieved by freddie's label of rich buddha that he put in some reference to it in his next 6 posts. what a douche.