Will The Horror I Mean The Wonders Never Cease 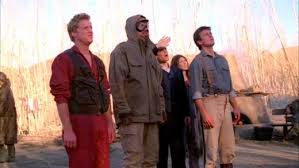 
It is extremely disobliging of Megan McArdle to publish her little propaganda pieces in the afternoon, often near the end of the work day. I am busy at that time. However, I shouldn't complain; since this is only her second post the week I suppose we're "lucky" to get any at all.

I will probably not be able to address her latest Trump piece until tomorrow but I couldn't wait to say one thing:


How can a decent human being support Donald Trump? That’s a question that a lot of pundits have been asking in recent days, particularly as we are treated to the sight of Speaker of the House Paul Ryan calling Trump’s remarks about the Hispanic judge in his fraud case “the textbook definition of a racist comment” while still refusing to disavow his support for the Republican nominee.

"Refusing to disavow his support"? McArdle chose the most passive way possible of saying that her econ-crush, The Hero of Janesville, The Man They Call Ayn, is now supporting the utterly insufferable Donald Trump.

It is fitting for the party of Trump to support Trump, of course. The voters have spoken. The party is merely accepting its chickens home to roost. What else are they going to do, let them be eaten by the big, bad, liberal and end up with an empty henhouse?

McArdle makes a stab at pretending she has professional standards.


Well, there is a case to be made. I confess that whenever I contemplate our nation's nuclear codes falling into Trump’s fingers (regardless of their length), I find it hard to be convinced by that case. But I like to understand a terrible argument before rejecting it. So here are the best (least-bad) reasons a person might endorse and/or vote for Trump:

As I’ve pointed out before, Trump is a celebrity candidate, and celebrity candidates do not operate by the normal political rules. They can bring out people who don’t normally vote. But on the flip side, they do not necessarily have the normal effect that rising politicians have on their political parties. Trump brings no organization with him, no political network that will survive when he exits stage left. He has no ideological fellow-travelers who will thrive in his wake. (How could he, when he has no detectable ideology?) He has done none of the work that might render the party beholden to him in future elections: no get-out-the-vote operation, no crack team of political consultants, no mailing lists, donor networks or polling powerhouses. It’s actually pretty reasonable to think that as long as he is denied the White House -- which still looks like the most likely outcome, though by no means inevitable -- the storm will blow over with relatively little long-term change to the structure of the party.

Trump's celebrity is important in revealing why he was able to step into the Republican party's leadership vacuum but he had little to do with the creation of that vacuum. That's the Republicans' fault.

(In the past she said Trump couldn't run because he, personally, didn't have enough money. Heh.)

Her boy Rubio had all that and where did it get him?

The status quo can't survive another recession, climate-related crises, or failed war. The Republicans are going to spend the next four to eight years trying to impeach and/or arrest Clinton.


5.Elites need a rebuke. For all my criticisms of Trump and his supporters -- and they have been many -- I find myself quite sympathetic with the folks who are angry at the establishment. Elites are smug. They are obnoxiously condescending. They have colluded to keep legitimate issues off the table.

This sort of elite collusion can certainly work, but if it becomes too disconnected from the electorate, a political reaction is inevitable. We are in the middle of that reaction. And I have to say that if I were out there in flyover country, I’d probably be pretty mad too.

She is utterly brazen. Bold as brass. Shameless. Without a smidgen of self-respect, dignity or honor. McArdle is an elite when she is appealing to authority and she's a humble woman of the people when she wants to latch onto populism like a remora, sucking it dry to advance her career.
Posted by Susan of Texas at 2:59 PM

Is Megan self-aware enough to realize that when she wrote

Elites are smug. They are obnoxiously condescending. They have colluded to keep legitimate issues off the table.

most people would think, Yes, Megan, that's you.?

A turnip would have that level of insight, but Megan?

Insight is for suckers. She has cold, hard cash!

Also forgetting that most of flyover country she references has Republican governors and legislatures. Let's take a look at how Kansas is doing because she won't.

I love to read your posts. Trenchant and biting, they never disappoint.

"Elites are smug. They are obnoxiously condescending. They have colluded to keep legitimate issues off the table."

Holy Mother of Gawd! Doesn't this cow literally call herself an Elite every other column? And I do mean literally.

So, when Elites are the ones running everything and making the "important" decisions, she's one of them because she lives in the same town or whatever, but when Elites are "condescending and smug" they are someone else.

...I regret the name-calling in my comment above (I guess that's why I can't be a good scientist), but her childishly ignorant sense of entitlement really burn me up--particularly when she has been gifted and rewarded for spreading the rot.

an elite when she is appealing to authority and she's a humble woman of the people when she wants to latch onto populism like a remora, sucking it dry to advance her career

Cole, don't worry about it. I called her a cow once as well.
http://agonyin8fits.blogspot.com/2011/06/public-morality-and-private-immorality.html