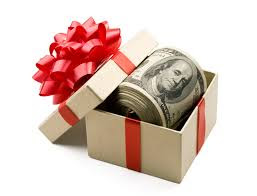 So no matter how fond you are of money, go ahead and buy that heavily discounted, unwanted gift for the woman in your life. The old dear will be happy just to have paper and ribbon to play with, an you will probably get a fat inheritance down the line.
Posted by Susan of Texas at 7:18 PM

well, it's pretty obvious why Megan gets nothing useful or nice, although calling anyone she might exchange gifts with a moocher/looter is an interesting strategy.

My family talks and we also have Amazon lists. It isn't hard if you're practical and/or have a brain. Ohhhh, I see the problem

I heard her blather on NPR the other day. Her opinion should come with a clear disclaimer that she is a supply sider and therefore can't be trusted with your money.

One of the great Megan themes => few see the world as clearly as Megan does.

I don't find this nearly as rewarding as her default theme => nothing can be done because hard as we see here:
https://www.bloomberg.com/view/articles/2016-12-23/fact-checking-s-infinite-regress-problem
Fact checking has difficulties so we can't check facts. Megan dreams up some challenges that she thinks can't be surmounted but ignores easy ones like Trump's claim that thousands of Muslims danced in Jersey City on 9/11.

And then of course another favorite - Obamacare has failed! But maybe Susan can skewer that one for us.

Did she just read The Gift of the Magi now and throw up in her John Galt sweater?

I want to order a copy of this post for everyone I know, and pay Amazon $3.99 to put each copy in a bag cinched shut with a ribbon.

Where are you Susan?