Responsibility Is For The Poors 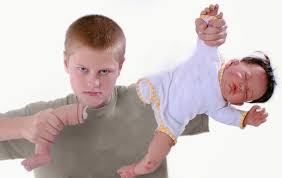 When you break something, you have a responsibility to fix it. When you do your damnedest to eradicate the health care of millions of people, you damn well better have something better to replace it. Unless your aim is to cause great suffering, which it well might be in this case, it's not enough to say that Obamacare is terrible and will destroy the healthcare system so it has to go. You must replace it with your oh-so-much-smarter and better new system.

When you don't, all your complaints about the new system don't mean anything. You wanted the system broken. You demanded its failure. You fought tooth-and-nail to kill it. You don't get to just walk away from that and shrug your shoulders and go back to your well-paid career rat-fucking the poor. You are responsible for your actions.

And make no mistake: McArdle doesn't care about the people who need insurance. She doesn't want the Republicans' greed and incompetence to ruin Republican political success.


My husband is, of course, completely right that it’s not clear what other problems this solves. It will not, for example, make the looming possibility of a "death spiral" in the individual market any less possible, and indeed may make it more likely. Passing this bill would certainly ensure that Republicans will 100 percent own any ensuing death spiral, and will have little luck whining that it was gonna death spiral anyway, because Obamacare. In other words, even if we leave aside any policy effects, this bill will be a disaster for the long-term political fortunes of the Republican Party.

It doesn't hurt that the Koch shops are against the Republicans' methods of killing Obamacare. They want it fully repealed.


Heritage Action, Freedomworks and Americans for Prosperity -- three of the biggest groups that Republicans will need to help them whip their right flank into voting for this thing -- have all come out hard against it. Avik Roy and Michael Cannon, two of the leading opponents of Obamacare in the policy community, have both panned it. You’re not exactly seeing enthusiastic cheers from the journalists who opposed Affordable Care Act, of which I am one. See? This is me, emphatically not cheering. If such a thing is possible, I am actively failing to cheer.

If McArdle is waiting to be praised and petted for not liking the results of her own labor, she is going to wait a very long time.

McArdle gives the reasons why she is against the Republicans' plans, which are mixed in with her usual lies and deceit about Obamacare and too tedious to discuss. Then she tells us that she simply can't understand why Republicans decided to pull down Obamacare without having a replacement.


I don’t understand what Republicans are trying to do with this bill. What do  they think will happen after they proudly proclaim that they’ve repealed Obamacare—followed in short order by the complete implosion of the individual market? Do they really imagine that they will be allowed to leave the rubble-filled lot there and proclaim that they’ve undone President Obama’s mistake? Or that, having watched them destroy the individual market, voters will be eager to let Republicans touch any of the other structures cluttering up America’s health-care policy landscape?

She should have thought of that when she was predicting that Obamacare would destroy health care and must be stopped immediately. She watched Republicans do nothing viable to replace Obamacare with a functioning market yet for seven years yet she yelped constantly to kill it. Now she shakes her head and fumes that her political party will be hurt by their and her actions.

If Republicans cannot get up the will to bear those costs, then they should do nothing, and start preparing their rebuilding strategy while they wait for the flaws in Obamacare’s structure to bring down the individual market on its own. Neither strategy is painless, because the ossified mistakes of earlier policy making have taken all the cheap and attractive options off the table. But either is better -- for America, and for the Republican Party -- than setting new mistakes in stone.

After  eight (or more?) years of Republicans rat-fucking Obamacare,  McArdle became convinced that it was damaged enough to die on its own and she is not best pleased that her ego or career might be dinged by a loss of Republican power. The sick, dead and suffering are beside the point.

Repealing the ACA will probably have a similar effect as T-Rump's horrible Muslim travel-ban. The law will be chaotic and difficult for anyone to understand, and there will be no one able to implement it properly. Meanwhile, medical offices will close, medical-tech facilities will close, dental offices will close, and a lot of jobs in the "health industry" will evaporate. SO: unemployment from financial cuts that will lead to the newest housing bubble deflating. . . on and on, Welcome Back, 2007!

The really awful thing is, our rulers (Kocks, Trumps, Bannon, Senate & House, Wall St) appear to WANT this to happen. They believe they will get richer and more powerful if the country is in a state of chaos. Maybe they will. It worked last time.

I wish you had a Twitter link so I could share your cogent essay with the world.

Love the gratuitous "asian vacation" mention, but there's so much wrong with this piece it's hysterical.

AT this point, I really don't think the Republican leadership much cares if the average American has access to health care. It's not even about alternative visions of equity. The rest of us are no longer their responsibility.