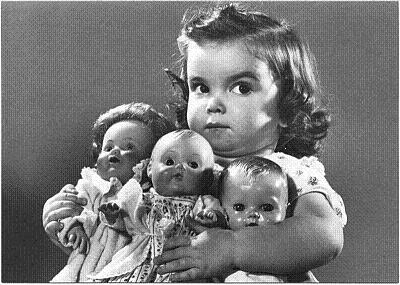 Megan heard that some little girls don't have any dolls. Fuck 'em.

I'm against gold buggery, but the commercials on FoxBusiness do make me want to have some pretty gold coins I can trickle through my fingers
about 11 hours ago via TweetDeck

As usual, McArdle recommends buying at basically the top of the market.

She should be working with Jim Cramer and Lenny Dykstra.

I've seen her on Kudlow, which is pretty much her natural level. It looked like she was on Hollywood Squares, with right-wingers instead of Paul Lynde and Phyllis Diller.

Who would have thought reducing Megan to the brevity of 140 characters would make her even more insufferable to read?

ALL those dolls look like Chucky, and so does the kid, a little.

Yes, the dolls are a little odd to modern eyes. I love creepy kid! That suspcious, covetous gleam in her eyes! The chubby death-grip on the dolls!