Bow Before Your God 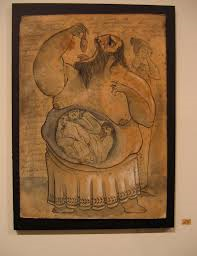 Discovering at last that Jonah Goldberg was right and it's easier to ask your readers to do your work for you, Megan McArdle has sought and assembled a bunch of emails from stalwart Republicans who are appalled that they might have to vote for a soulless monster (Trump) instead of a soulless monster (Rubio or Cruz).

Authoritarianism is the core principle of the Republican party. Obedience to authority is in its bones. McArdle wants to preserve the authoritarian system with a different leader. She does not mention that.

She doesn't mention her own musings on whether or not Black people are mentally deficient. Her racism oozes out of her posts when she discusses gentrification, welfare, riots, redlining, and unwed motherhood. She doesn't review her beliefs that women should not have control over their own bodies and should in fact be forced to undergo sodomy (penetration with a vaginal wand) to punish them for wanting an abortion.

No, Mrs. Megan McArdle is absolutely innocent in the degradation of her party. It's all Trump's fault. (When she reads Douthat's latest poo she'll blame liberals as well.)

Meanwhile, McArdle explains how anyone who's anyone is against Trump. Some quotes from her readers:


“I’ve been involved in politics for almost as long as I can remember.… Throughout the years, I had the opportunity to meet and campaign for a number of candidates…. I’m the first to admit that they all had flaws, and some were less conservative than I, but I never met or worked for one who wasn’t a patriot. Yes, we disagreed, but never did I feel that these disagreements were personal or that they conveyed a lack of respect for our fellow Americans. Far from it. That changed with Donald Trump.”

This person worked hard to elect candidates because they waved the flag. Now he can't understand how people could follow the nationalist.

This genius voted for a bunch of venal, stupid, immoral candidates just because they called themselves Republican. That's exactly how he ended up with Trump.

A Marine Officer says he votes straight Republican, even from Iraq, but he'd vote for any other candidate over Trump. Yes, he helped reelect Bush while in Iraq. But Trump is beyond the pale.

McArdle tells us that her correspondents would generally rather throw the election to Clinton than elect Trump. Not even the balance of the Supreme Court can change their minds.


“I fully feel that even a single four-year term by either Hillary Clinton or Bernie Sanders would be disastrous to the fundamentals and principles this nation was founded on. But a Donald Trump administration would be equally, if not more, disastrous. The difference is that with Donald Trump, conservatives and the Republican Party would be shackled to the mess created, bound at least by association to whatever tyranny he imposes, whatever disastrous policy he enacts on a whim, and whatever hateful, bigoted rhetoric follows in his wake by the alarming number of his followers I would never have imagined still exist in America today.”

If Trump is nominated the scam is over. The Republican party will no longer be able to hide behind an urbane, sophisticated, intellectual façade. All its ugliness will spill out into the open in a never-ending stream of invective and disastrous policies. It'll be just like when Lily Pulitzer sold bags at Target and ruined the name for everyone!


So why exactly do people hate Trump?

“It’s not just that he’s vain, conceited and a braggart. Or that he’s prone to petty put downs, schoolyard taunts, cruel mockery and just plain rudeness. It is that he embodies virtually everything I strive to teach my young sons not to be and not to emulate.

•That being wealthy makes one morally superior.
•That material wealth is a measure of a man’s true worth.
•That boasting about sexual conquests is something to be admired or cheered.
•That every challenge to your ideas should be met not with a sound argument about the idea, but with smears, insults and put downs about the person uttering the disagreement.
•That legitimate challenges to your ideas should be met with threats of financial ruin or lawsuits. •That the force of government should be wielded by the wealthy against the weak.
•That your failures or lack of success must always be attributed not to your lack of intelligence or initiative, but to someone else getting something that’s rightfully yours.”

Well la-de-fucking-da. McArdle actually said that being wealthy makes one morally superior! The rich chumps in her audience ate it up with a spoon.


[Q.]Do you think the world (human civilization) has already passed its best point, or is that yet to come? [A. (McArdle)] Mathematically, it is likely that we are near the peak of human population. On the other hand, I'm encouraged by the incredibly rapid economic change going on now. I think that getting richer has made us more moral - more careful about human life and suffering. So if we keep getting richer, I expect that we will also get better, with more morality, more art and culture, and more of almost every other good thing.

As I already repeated, she used to insult liberals all the time and still does when she can get away with it. She supports the wealthy's chokehold on the economy. She claims liberals keep conservatives out of academia. She does everything that her correspondent supposedly hates and she is so freaking oblivious that she doesn't even notice she is damning herself with her guest's words.

McArdle says she is surprised that so many people say they would abandon the party if it became the party of Trump. People who get their self-esteem from their authoritarian structure can't bear to become Trump followers. They've always told themselves that they are superior to the masses and especially liberals. Through every scientific paper that helpfully pointed out their numerous and debilitating failures as decent human beings, they have claimed they are special, superior, Incredible.

Republicans have always supported proto-fascists, racists, and misogynists. They are tired of being told to use their inside voices and if they don't have anything nice to say, don't say anything at all. They want Trump.

All those Ray Harryhausen movies paid off. This is the clash of the Titans, in which Cronus castrated his father and supplanted him, then ate his own children so they would not depose him in turn. Trump is castrating the party (ouch, Mr. Christie!) and will eventually try to eat someone on live television. It will probably be Ross Douthat. He looks well-marbled.

but I never met or worked for one who wasn’t a patriot. Yes, we disagreed, but never did I feel that these disagreements were personal or that they conveyed a lack of respect for our fellow Americans.

And I'm sure that the commenter extends the same courtesy to Democrats.

Can someone please explain to me how this differentiates Trump from Rubio or Cruz?

It will probably be Ross Douthat. He looks well-marbled.

This is so awesome.

I have to go vomit now.

Her correspondent (if he or she is even real) thinks a Clinton or Sanders term would be disastrous and contrary to our founding principles. Like what? Elections? And they worry about Trump enancting policies on a whim? Presidents don't get to do that, at least not on a large scale that drastically affects most of our lives. Her readers, fake or not, are as dumb as McArdle.

McArdle has always felt that she is being disenfranchised when she votes and her candidate loses an election. I'm seeing commenters say that even if Trump is supported by Nazis and is a nightmare candidate who will harm the country and destroy the Republicans, he's better than Clinton.

Interestingly enough, I was just reading this above.

Also, is there any evidence Megan has ever voted other than trying to vote and failing?

Umberto Eco has a nice piece on fascism


Susan, it's a delight when you find your voice as you did in this piece.

Uhm, I think the translation is "Y'all kick *butt*!"
but I'm not sure; I'm not a native speaker of Texan.

Today's shorter douchebag:
Trump openly did everything Republicans have supported over the decades so please can somebody stop him before even the dumb people figure it out?

Cynic: Thanks for the link.