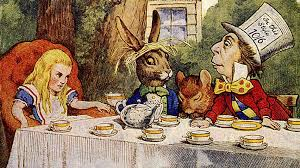 Megan McArdle after she realized that all the cool kids left the table a long time ago and now she's stuck defending Robbie and Milo.

Megan in Wonderland has fallen even further down the rabbit hole.


Robert Stacy McCain has had his account banned, just weeks after Breitbart’s Milo Yiannopoulos lost his “verified user” check mark. Both practice a brand of Twitter activity one might politely call “obstreperous.” No one knows precisely what led to the disciplinary actions, but McCain believes it’s because of his vocal comments about social justice topics.


We do not, in fact, know that angry, loud conservatives are more likely to be disciplined by Twitter than angry loud lefties; maybe there are a bunch of social justice warriors quietly getting their accounts taken away at the same time for similarly nasty comments.  We don’t know whether Twitter’s actions were unjust.

The point is that it doesn’t matter. The moment that you set yourself up as the arbiter of what constitutes abuse, it is virtually guaranteed that you are going to have to make gray-area judgment calls that will alienate some portion of your user base.

When your user base has stalled despite your best efforts to grow it, and investors are getting restive, it’s probably not the right time to signal to half of the political spectrum that their views are not necessarily welcome on your platform. But Twitter didn't have much choice. Aggressive banning is seen as an attack on the right, but continuing the old approach would have been seen as an attack on the left. In the culture wars of today, there’s precious little middle ground.

Her parents paid something like $150,000 for her high school education. She paid another $100,000 for her useless MBA. She worked for a once-revered magazine. And now she's bitching that Twitter is being mean to Milo Yiannopoulos, whose entire raison d'etre is to make a pariah of himself because it's the only way that sad man can get any attention.

She keeps saying that liberals are alienating half the US but not many people are affronted on the behalf of people like McCain and Yiannopoulos. She is, and it shows how far down the Tea Party hole she's fallen.

Added: Let's not forget the irony of McArdle telling a private company that they should be forced to serve people they don't want to serve.
Posted by Susan of Texas at 1:09 PM

half of the political spectrum

Hmm, since the split of dems to repubs is 48% to 39% I am wondering if Megan has another fever throwing off her calculations...

Link for those who care.

We know pecksely that Twitter's actions were not unjust. They are a private company. They can ban users for saying they like Spaghetti-Os if they want. The consequences are theirs to suffer, but unless I'm missing something, these guys were banned or demoted for being rude, harrasing and agressive in ways that are clearly outlined as forbidden in Twitter's terms of use. Let's illustrate the difference for Megan:

"People who disagree with me should be hounded, abused and stalked until they shrink away in fear." (Was that 140 characters or less?"

And that first link is priceless, with the author comparing having the Michelin star of Twitter removed from your account will land you in the poor house. People did disseminate ideas before this junior high platform existed.

I'm starting to worry about the future of our heroine. Her brand of economic elitism is taking a severe hit in the marketplace of ideas.

"If you don't let us be mean bullies on Twitter, we're taking our toys and going home!" is bottom of the barrel. I don't worry. I rejoice.

Not to mention that Milo is just in it for the attention and loves having another ax to grind.

He's the most impersonated person on the internet! After a million people that we've actually heard of.

I knew she'd be on it. Another stunning post, Susan.