From Soup To Nuts 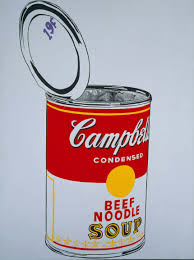 I couldn't think of an image so here's a Warhol I saw yesterday. It was awesome.


Our story begins with Devin Watkins.

Devin Watkins formerly worked at the Institute for Justice and graduated with honors from the Antonin Scalia Law School at George Mason University. Prior to his legal career he was a senior software developer at Intel and WebMD. In 2012, he represented Oregon at the Republican National Convention.


Watkins moved from the Koch-spawned Institute for Justice, beloved of Koch-bred Megan McArdle and Uber, to ASSLaw at Koch U. He must be very smart because he is a lawyer, presuming he's passed the bar. That will be important later.

Like Megan McArdle, Watkins is a defender of guns and their right to own people in DC. It was extremely magnanimous of McArdle to be so eager for DC residents to have guns, considering there are so many "urban" people in DC and also considering how McArdle feels about "urban" people and their violence and crime, inferior "culture," child-like inability to delay gratification, and mental deficiency. Perhaps she wishes to keep them in between her and any mobs that storm the Capitol. Watkins is generous as well, and is irate that there might be a hitch in his gun-toting giddy-up.


Less than a year ago, Kim Davis ignored a court order from the U.S. District Court for the Eastern District of Kentucky and refused to issue a marriage license to same-sex couples. She was held in contempt of court, served five days in jail, and was ruthlessly attacked in the media.

Now the office of Karl Racine, the Washington, D.C. attorney general, has ordered D.C. government employees to ignore a court order from the U.S. District Court for the District of Columbia. The order by the D.C. District Court Judge Richard Leon was to stop denying individuals applying for a concealed-carry permit from requiring a “good reason,” and to immediately update the forms to no longer require that.

Watkins doesn't give a source for his scoop, which turns out to be understandable under the circumstances, which are he appears to have made the whole thing up. After the court order, Watkins said, he scurried over to get a permit for his very self. Until this moment, anyone in DC had to give a reason for wanting a gun, and not all reasons were considered to be good reasons.

I am not sure why Watkins waited so long to get a concealed carry permit; surely he is old enough to wear long pants and therefore carry a gun. What was he waiting for, Christmas? Anyway, now that he could get a permit for no reason at all the intoxicating freedom went to his head and he hied hither.


After the order, I went to apply for a concealed-carry permit in the District of Columbia. The police officers there told me the D.C. attorney general’s office had ordered them to ignore the court order and continue to deny applications. Thinking there might be some kind of mistake, I contacted the AG’s office, which explicitly told me if I had a complaint about what they did I could file that complaint online.

Watkins goes on to huff and puff about Kim Davis' persecution and assassination as performed by the employees of the government under the direction of the President of the USA.

However, if you go to the website of DC's AG, you will see an update dated a week ago:


In light of the preliminary injunction issued by Judge Richard Leon of the U.S. District Court for the District of Columbia in Grace v. District of Columbia, Civil Action No. 15-2234, the Metropolitan Police Department will not require applicants to comport with the “Good Reason” requirement under D.C. Official Code § 7-2509.11(1)(A) & (B), while the injunction is effective (see “Grace Preliminary Injunction” document, attached below).

Applicants must still meet all other requirements when applying for a license to carry a concealed firearm. Applicants who were previously denied pursuant to the “Good Reason” requirement may submit a new application. The application fee for re-applicants meeting this criteria will be waived. New applicants should use the existing forms until such time as the Department is able to revise forms in accordance with the court’s order. Questions should be directed to the Firearms Registration Section at (202) 727-4275.

It's very odd that the AG's office would make an official announcement that they were putting the order into effect and then turn around and tell the police to ignore the order. In fact, it's unbelievable. Which is, no doubt, why the AG's office e-mailed Watkins and told him they had done no such thing.


UPDATE: Rob Marus, communications director for the D.C. attorney general’s office, responded to this article with the following.

“[T]he Office of the Attorney General has not and would not instruct any officer of the District government to ignore any Court order. As the District stated in its reply brief filed with the Court yesterday (copy attached), the Metropolitan Police Department last week revised its concealed-carry licensing website

Besides a correction regarding Kim Davis, at this time there have been no other additions or corrections. We don't know if Watkins contacted the police to ask them why he was told the permits were being denied. Did he talk to the person at the AG's office again to find out why she lied to him?

Watkins did not wax indignant that he had been given bad information and thus denied his constitutional right to be armed for no reason. He did not threaten to sue anyone, and he is a conservative lawyer.

His post was picked up by others. Many, many others, including Brian Doherty at Reason, who checked up on the story.


In a phone interview with Watkins, I got him to elaborate. The city has 90 days to consider the application, so he has not officially been denied yet. The incident occurred on May 17.

But Watkins says what the receiving officer told him—he did not get the name—strongly implied that his lack of listing the "good reason" would mean he would be denied, and that they had been told by the attorney general's office to ignore the ruling.

Watkins handed in a copy of that ruling along with his application. He does not know the name or position of the person at the attorney general's office who responded to his complaint about the matter with telling him he should just file a complaint online.

I told [the officer taking his application] “you do understand that ignoring a court order could potentially find you in contempt of court.” They said “look sir, this is not a court of law. We just do what our superiors like the AGs office order us to do.” I insisted that they take my application anyway even if they were going to deny it in the end.

The city did on May 18 write in a press release that "we believe that the District's gun laws are reasonable and necessary to ensure public safety in a dense urban area, and we will request a stay of this decision while we appeal."

But Robert Marus, a press officer for the D.C. attorney general's office, vigorously denied that they'd given any such order to disobey the order in the meantime.

And what could be more convincing than a changing story with anonymous villains?

Thanks to Megan McArdle we know that ideas aren't passed around, they just grow in people's head out of nowhere, but despite her elite wisdom we see that among the dozens of others who took note, Charles C. Wigglesworth Cooke saw the alleged injustice and ran with it, re-tweeting it for his devoted followers.

And speaking of the devil, McArdle re-tweeted Cooke's tweet. But that's not all! She also called for the resignation of  Karl Racine, the AG of DC (band name!).

I thought Kim Davis should have resigned if she couldn’t in good conscience comply with the law. So should the DC AG https://t.co/MIO7vR64f9
— Megan McArdle (@asymmetricinfo) May 25, 2016

Yes, a Bloomberg columnist called for the resignation of the DC AG over a dubious re-tweet.

It was a strange journey from Watkins to McArdle but at least we know it's not just another wingnut ginning up controversy for dollars and the entire conservative propaganda apparatus spreading it hither and yon. Because Megan McArdle said so.
Posted by Susan of Texas at 11:50 PM

Ironically, the "Good Reason" law has been policy in Israel for decades. Conservatives often cite Israel's abundance of guns as a means of self-defense. Except the "Good Reason" law is even stricter in the Holy Land. One who applies for a permit in Israel is required to prove that it is necessary for their job (such as a security guard). Obviously the IDF does not apply here.

The ironic thing is that most Israelis support their strict gun laws.

The Federalist is a terrible rag run by a plagiarist and guy who ran stories for Malaysian money to support their government.

Usually plagiarists get run out of the writing game.