Taking On The Generosity Of The Welfare State: A Megan McArdle Quickie 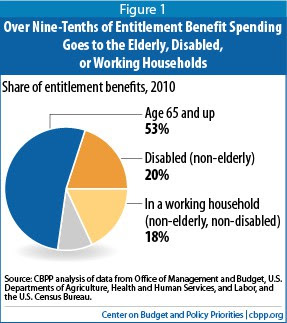 
Megan McArdle's paycheck rests on coming up with three or four posts a week, so when her interest was piqued by the question of a universal basic income; she slithered into action. McArdle decided its time has not come, it is too expensive, and nobody can do anything ever anyway. Examining her argument would be utterly uninteresting but there are a few aspects of McArdle's thinking regarding the "What Shall We Do With The Poors?" question that I would like to highlight.


Well, because the UBI has some problems as a policy. The idea of a UBI is that it fixes many of the problems with the existing welfare system. The current patchwork of food stamps, health benefits and cash assistance creates a lot of economic distortions, because we’re giving people the stuff we think they ought to want (food, health care), rather than the things they actually do want. This can create problems for poor people who might, say, urgently need to cut back their food budget in order to repair their car, something that you can’t do unless you can find a repair shop that takes food stamps.

Yes, McArdle wants the poor to be able to cut back on their food budget, which is so generous they need food stamps, so they can afford to pay hundreds of dollars to repair their car. Perhaps we should agitate to increase wages so our working poor in this generous "welfare state" don't have to depend on government assistance, but McArdle told her readers that businesses will go bankrupt if they ever raise wages.

McArdle has said many times she wants to get rid of Social Security, Medicare, Obamacare, and anything other than the bare minimum of aid, perhaps just enough to stave off bread riots. She's mostly lying. She does not. She does not want her father to pay for his and her mother's healthcare; she would end up with nothing to inherit but hospital bills. She says she wants to pay her medical bills out of pocket but takes government-and-employer-subsidized insurance instead.  McArdle doesn't care about Social Security either way because her father is wealthy.


I suspect this is why the advocates of a UBI have recently become so interested in the problem of robots taking our jobs. The idea is that automation will make human labor so worthless, and make humanity so fantastically wealthy, that we practically won’t notice if we siphon a considerable amount of that money into a benefit that will, effectively, allow people to be permanently unemployed without starving to death. I’m skeptical of this story for a number of reasons -- starting with the fact that “the machines are about to put us all out of work” has been a staple of science fiction for a century without coming noticeably closer to science reality. This time may be different, of course; even the boy who cried wolf eventually did come across a predator.

But even if this story eventually comes true, it isn’t true now -- and until it is true, there’s no real reason for voters to want to shuck their current welfare state for one that is either much more expensive or cuts benefits for current beneficiaries, while throwing in some possibly strong disincentives for lower-skilled people to hold jobs. After all, the government is pretty good at mailing checks. In the event that a majority of the population is thrown out of work by robots, a UBI can be set up in a trice.

McArdle denigrates the entire idea of mutual responsibility and care because her career is based on persuading the public to voluntarily lower taxes and regulations that the rich don't want. McArdle chose to achieve this goal by denigrating African-Americans, the poor in  general, women, gays, and liberals so that nobody would come to their defense when they are exploited and scapegoated by the ruling class. Nobody made her. She could have stuck to numbers and theories. But it's how she thinks so it's the weapon she gleefully* chose to use.


*These jane galt links demonstrate why she felt she had to erase her old blog. She knew they would damage her pretense at being a journalist, not a propagandist.
Posted by Susan of Texas at 12:59 PM