The Hunting Of The Snark Cookie Of Gratitude: Thanks For The Sex At Dawn 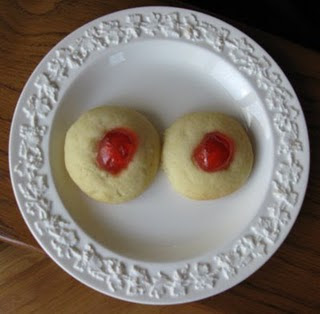 Via Clever Pseudonym and Tbogg we see that somebody deserves a cookie! One of the authors of Sex at Dawn snarks on Megan McArdle and her dismissive, less-than-professional review so we don't have to.

[There] are people you can talk to and—more importantly—listen to. They respect evidence and try to follow it where it leads. They might find your thesis unimaginative, but they're unlikely to be offended by it—or by any other idea, for that matter. They may agree or disagree with your reasoning, but they're likely to surprise you with a question you'd never considered. You can learn from these folks.

But then you get someone who feels so personally threatened by the very idea that they don't give a damn about "your so-called evidence" (they assume you're making it all up anyway). Normally, they won't even let you explain what the book's about, so certain are they that it's nothing but poppycock.

Stand back, because you're likely to get wine in your eye as they sputter and spray their indignation. Best to avoid them entirely if you can, as there's no reasoning with someone who is reacting personally to an impersonal scientific argument. If you do try to engage, expect playground-level tactics: name-calling, misrepresentation, slander, and personal insult.

The trick is to learn not to take any of it personally, because they're not really talking about you, or your book. They're talking about themselves, often quite revealingly, at that.

We are glad to see this confirmed by professionals, since we are strictly amateur.

It's amusing to watch professional psychologists open up Megan McArdle and categorize what they find inside but it's equally amusing and revealing to watch Ann Althouse defend her.*

... is a funny title for an article, written by the author of "Sex at Dawn," which book title he declines to put in italics or quotes in his article title. I thought it would be interesting to discuss sex at dawn, in the literal sense, but I find myself confronted with an author who's miffed at a blogger who's dissing his book:

There's nothing Ann likes more than talking about sex. It's a sure-fire attention getter, and our Althouse dearly loves the public eye, whether it's the fixed lens of a camera, the reading eyes of her "public," or even the fish eye of disapproval. It's all good in her eyes.

Her comments begin strangely, with the admission that she's "in the middle" of the book. Note the urgency to condemn it publicly, even before reading the damned thing!
Oh, blah! I hate this criticism. McArdle is blogging, not doing the official book review for the Atlantic. A rule against criticizing books you haven't finished would overprotect authors, since you shouldn't finish a bad book, and it would also underprotect authors, since the critics wouldn't disclose that they hadn't read the whole thing.

First, let us marvel that Althouse thinks it's common practice to review a book you haven't read on the internet and then lie about having read it. (For her it is.) But most people believe you should finish a book if you're going to trash it in public, and McArdle is very much in the public. The Atlantic still has influence. The authors of the book Sex at Dawn probably can't afford to ignore her insults.

Althouse has a horse in this race too, however--if people aren't "allowed" to make half-assed, malicious critiques of others and their work, Althouse would have to find a new paying hobby.

But bloggers... bloggers can open a book to a random page, read one sentence, cogitate furiously, then open up their laptops — maybe right there at Borders, where they picked up the book they didn't buy — and tap out a free-association blog post saying anything that occurs to them and publish — using the WiFi they didn't pay for either. It's not the slightest bit strange. And it's not unfair either. It is what it is, and we know what it is. It's blogging.

If someone had said "How do you think Ann Althouse comes up with her ideas?" we would have used these exact words. Except for "cognition," of course. Fact free, knee-jerk, thoughtless, malicious, sex-obsessed, free-association blathering about whatever drifts through her mind. No wonder Althouse is a McArdle fan.

And boy, does she lash out:

• "It reads like horsefeathers . . . like an undergraduate thesis,"
• "breathless rather than scientific"
• "cherry-picked evidence stretched far out of shape to support their theory,"
• "they don't even attempt to paper over the enormous holes in their theory."
Ouch! And that's just the first paragraph.

Eh! There are only 4 paragraphs. By the way, "their theory" — if I can trust McArdle — is that "people are naturally polyamorous." The dispute continues with McArdle and the author (Christopher Ryan) throwing shit at each other in a fight about whether people are like bonobos. I'm just saying "throwing shit at each other" because that's how bonobos fight, and people are like bonobos, right? Not right? Advantage McArdle!!!!!

Now that she mentions it, McArdle's technique does include just throwing out shit and seeing what sticks.

Anyway, as you've probably figured out by now, the book is not about sex at dawn — the practice of having sex upon first awakening in the morning — but sex and evolution — "dawn" in the sense of "the dawn of man."

Althouse doesn't want you to experience the same disappointment she went through. It's a public service.

So where am I going with this? It's a blog post. I'm a blogger. I'll go where I want, which is where I always go when this subject comes up, and I don't feel safe in this conversation no more...

She'll go nowhere, as usual. That's what happens when you put less effort into your blogging than you put into your cappuccino order.

Well, the major difference for me is that Ann is a blogger with a Blogspot site and, as Dr. Ryan illustrated with his assumption that Megan's review must have been an intelluctually stunted hiccup rather than representative of her usual low quality output, because she writes for the Atlantic and it's a respected publication. That's the difference, Althouse. You: Hobby blog. Megan: Professional blog at an aged, once respected magazine founded by some of the greatest figures in American letters.

And Dr. Ryan also illustrated how wrong Ann's assertions are that it should be okay to review a book you haven't finished. One of the main points Megan used to prop up her arguments was her claim that the book did not address the issue of jealousy, while it turns out we're told there is indeed an entire chapter on the subject. I guess rightie female bloggers must have the urge to stick together, because there's no way anyone with a brain could not only defend, but claim Victory!!! Megan!!!, a supposedly professional journalist making a huge mistake like that.

How many times can one person have such blatant idiocy and incompetence exposed and still keep their job?

How many times can one person have such blatant idiocy and incompetence exposed and still keep their job?

Isn't Althouse a law professor at the University of Wisconsin? I'm sure her colleagues are mighty proud of that reasoning.

I'm still trying to figure out why Ezra Klein still links to McArdle. I'm guessing this has something to do with it.

McMegan 5 days ago in reply to kimcmich

I've known a number of people who experimented with polyamory; most of them found that jealousy made this very, very tricky. Not impossible. But very difficult. Even when there was explicit agreement on the rules.

McMegan 5 days ago in reply to yahoo-JZX5MGJ7X2MQEOFLR2M2CQBZUA

The chapter [on jealousy] is terrible; it consists of saying "If parents can pretend to love siblings equally, why doesn't that work for sexual partners?" In fact, parents don't usually manage to conceal their favoritism, and there is enormous competition between siblings as a result. This is not a serious treatment. Nor does the chapter refute the notion of sexual jealousy as a universal; it simply posits that some societies have managed very stringent social mores to control it. Indeed, the fact that they emphasize these social mores implies that jealousy is a universal, hard-to-deal-with force.

timb116 3 days ago in reply to McMegan

Someone was not part of a loving family....apparently
Flag 4 people liked this

This reminds me when I was in college and somebody handed me a guitar. Some smug a-hole said, "I bet you can't play Unchained," and as I played the opening riff the a-hole guffawed and said, "Ha! He can't even play the rest of the song."

Just as I couldn't play the entire song within the 8 seconds it took this jerk to criticize me, it was the fault of the authors at Sex at Dawn that their chapter on Jealousy didn't pass through McArdle's brain before she decided to put down the book and review it. The chapter on jealousy doesn't exist because she didn't read it. Isn't that like the early stages of infancy where objects that aren't in the child's field of vision don't exist?

McArdle and Althouse together? Dangerous!

Clever Pseudonym points out an important distinction about venue. But let's be honest - both of them often offer opinions that are unfounded or poorly argued, and sometimes preposterous. McArdle is more likely to just make crap up, while Althouse is more likely to seek refuge by being pedantic (See Roy Edroso's most recent Althouse posts). Both tend to get hostile when challenged. It’s a bit refreshing to see Althouse admit that her standards are as low as they are. Of course, she's still trying to justify them. There's nothing wrong with a free-wheelin', opinionated blog – but if the opinions are poorly supported, and offered authoritatively or snottily, it's not surprising there's criticism in response. If you dish it out, you should be able to take it. And if you want to be taken seriously, you should make substantive arguments.

Two of Althouse's funniest are still her claims that great artists are conservative, and that fiction shouldn't be taught in school. (Both wound up involving multiple posts and comments.)

As for McMegan – shilling crap is her job. It's sad to see The Atlantic's decline.

My response to a description of Sex at Dawn which claims people are naturally polyamorous, would have been, "Well DUH!" Thousands of years of men and women fooling around ... all the strict, even vicious rules made to try and stop all the polyamoré are there for a good reason. It don't come easy.

And I ordered the book from Amazon.

It's not the slightest bit strange. And it's not unfair either.