Stupid or Evil? Part Of A Continuing Series 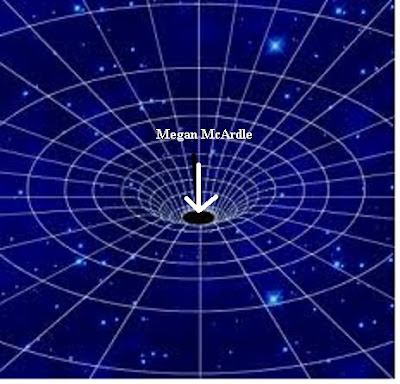 It seems Megan McArdle is a little confused about that thing we call reality.

clawback said...
So the solution to insolvent banks is to throw roadblocks in the way of the market clearing? Funny to hear libertarians trying to make this case.

McMegan 22 hours ago in replyl to clawback
You seem to think that being a libertarian means encouraging people to put themselves into insolvency (or forcing them to do same). This is not in the definition of libertarian.


clawback 19 hours ago in reply to McMegan

My understanding is that being a libertarian means, among other things, that you believe markets should be allowed to function. If this means anything at all, it means if you make a bad investment, you lose money. Bad investments would include lending money to someone purchasing a bubble-inflated asset. Thus, attempts to throw either legal or moral roadblocks in the way of this process are indeed anti-libertarian.

McMegan 18 hours ago in reply to clawback

Who's saying markets shouldn't be allowed to function? You're advocating forcing markets to clear at an artificially low level.

clawback 17 hours ago in reply to McMegan

Government, and society in general, can interfere with the market in various ways: debtors' prisons, using police power to enforce recourse loans, making bankruptcy more difficult, and your favorite option: ostracism. And no, eliminating them would not result in artificial prices; retaining them does.


Is Megan McArdle really so fundamentally, monumentally stupid that she does not know the banks sat on their bad loans and that the government bailed them out so they would not have to reveal all those bad loans and send the economy crashing? And does she really, actually, cross-my-heart-and-hope-to-get-a-clue think that the government wants to do the opposite; force banks to clear their bad loans at an artificially low level?

The same person who prattles on and on and on about how people always act in their self-interest says that the happy recipient of millions of dollars in Wall Street donations, who is now hitting up Wall Street again for more campaign donations, wants to force banks to lose money out of blind ideology?

How stupid is this woman? The stupidest person who ever managed to bumble her way out of the womb? How is she able to summon up the wit to light a cigarette? Sign her name? Find the right airport in a one-airport town?

Nobody who managed to graduate from University--twice--is this stupid. She is simply a liar, who doesn't care how stupid she sounds because she's not being paid to be sound smart, she's being paid to sound smart to people who are too stupid to know when they are being lied to. And when a commenter who is not stupid manages to find his or her way into her little Bubble of Stupid, McArdle acts even more stupid.

Megan McArdle has discovered that if you are dumb enough, if you show absolutely no evidence at all of even the slightest knowledge of how the world actually works, you can reach an event horizon of stupidity in which the reader is sucked into the gravitational pull of your overpowering stupidity and infinite density is reached. In which McArdle seems so stupid that the reader is convinced that nobody could be that stupid, so the reader himself must be wrong, not McArdle.

She was incredibly rude to you. I'd say it was unprofessional but being rude and lying is her profession.

How stupid is this woman? The stupidest person who ever managed to bumble her way out of the womb? How is she able to summon up the wit to light a cigarette? Sign her name? Find the right airport in a one-airport town?

Maybe we could arrange a stupid-off between Jonah Goldberg and Meegan. (Jim Hoft would probably win, even if he wasn't invited.)
~

Bring Back The Lash

June 16, 2011 8:38 A.M. By Jonah Goldberg
I’ve got to admit, I found this op-ed surprisingly persuasive. Peter Moskos argues that we should bring back flogging in order to reduce the prison population. I’d be curious what Ramesh thinks on this one.

That whole post was built around the idea that enouraging modifications would encourage people to default. Megan was perfectly aware that legislative attempts, as opposed to the settlement she was linking, do NOT require default to get into the mod program. Hence this exchange:

McMegan 1 day ago in reply to wiredog

The program said that they had to be defaulted. So apparently more people defaulted.

downpuppy 23 hours ago in reply to McMegan

Possibly the Countrywide settlement that the article was about. The HAMP program, which mostly failed because the banks were able to ignore its terms & continue doing WTFTW, did not require default.

Using the term "program" instead of settlement could almost be considered an attempt to confuse your readers, but we know you'd never do that.

McMegan 23 hours ago in reply to downpuppy

It's in the blockquote I excerpted that the program was the result of a settlement. This seems confusing only if you find multi-sentence blocks of text too overwhelming.

Of the many things to find incredibly annoying, one is to pretend that there are no negative consequences to defaulting. Unlike rich assholes (i.e. Trump) who can default and get more suckers to loan them money the next day, if the average person defaults, a couple of big things happen: 1) You lose your home, and 2) your credit rating gets nailed. Sure people will be willing to take this hit if they are hundreds of thousands underwater or the have to move for a job, etc. But you don't do this casually to get 5% fixed instead of 5.25%.

Definitely both. She is clearly evil and enjoys the thought of other people suffering, but the innumeracy and inability to structure a meaningful argument suggest that she's also not nearly as smart as she thinks she is.

She "knows the Terminology, and has the accent almost right."

Both her editor and her publisher at The Corporate Shillhouse formerly Known As The Atlantic are scheduled as featured speakers at the Aspen Ideas Festival. chew on that for a few moments. wonder if mcmegan will be there?