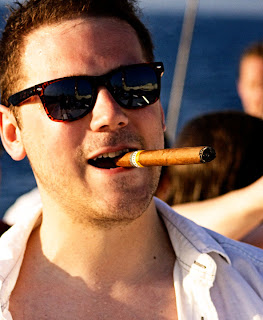 Yes, this putz actually picked this picture for his bio.

It's bad enough that The Heartland Institute is a think tank that attempts to kill people slowly through reducing regulations on dangerous industries in exchange for money from oil, tobacco and drug companies. (And are admittedly trying to create propaganda for school children.)   But it's downright evil to employ boy plagiarist Ben Domenech  to edit their "Health Care News." His op-eds are, unsurprisingly, the same kind of boiler-plate, rightwing hysteria that he has cranked out ever since he was a toddler pundit.

Some 150 years later their descendants stood shoulder to shoulder in defiance of a distant, tyrannical regime, paying dearly to establish that our rights come from our Creator, not from government, and that no government can take them away.

Obama, Pelosi, Sebelius and their allies clearly think otherwise. But it’s possible they have crossed a line here that is without national precedent. And some lines, once crossed, set in motion changes in the course of human events. In the end, free people either allow their nations to slide into full acceptance of the denial of human liberty, or gather in uprisings against tyranny around such dangerous ideas as “Congress shall make no law respecting an establishment of religion, or prohibiting the free exercise thereof.”

He's talking about contraception coverage but he could be discussing anything. That's the sort of crap you can crank out in your spare time between loading up your Amazon cart and wandering your neighborhood in search of hipster pubs. It's enough to make you feel sorry for billionaire industrialists. They had to cheat and steal to get their money. Their pundits have to do little more than fart out some well-worn copy and light up a celebratory cigar.
Posted by Susan of Texas at 2:58 PM

If you don't want to hit him the face with a shovel, you're not human.

Soooooo...you could be Mitt Romney. Are you Mitt Romney? Only you can know. Do a quick self-quiz: Did you ever strap your dog to the roof of your car? If you did, you might be Mitt Romney.

Sometimes a cigar is just a cigar, and sometimes there is just a big dick smoking one.

And a Cohiba, too. What a waste...
Unless it's counterfeit, but the putz wouldn't know the difference.

I'd like to see his facial expression after someone yanked that stupid cigar out of his pie-hole. would he look like the famous Churchill photo ;-)? or would he be blubbering and whining for the Government To Do Something?

Is he identifying the First Amendment as a dangerous idea, or suggesting that the dreaded liberal establishment thinks it's one? Either way, this man is terribly confused, as well as a douche.