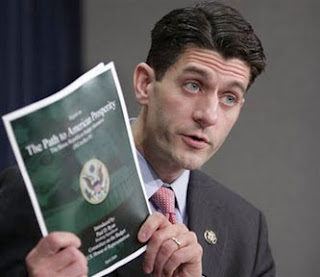 After repeated denials, Paul Ryan has admitted he requested stimulus cash even after sharply criticizing the program.

[Ryan] “Regardless, it’s clear that the Obama stimulus did nothing to stimulate the economy, and now the President is asking to do it all over again.”

What does that remind me of...?

This is all technically true, and collectively nonsense. [re Matt Taibbi's article on Goldman, Sachs]
...

Or perhaps a better way to say it is that the facts are right, but the mini narratives are ludicrously wrong, which makes the meta narrative suspect.


Paul Ryan and Megan McArdle: sisters under the skin. Both so deep in denial to protect their fantasy world in which they are leaders and intellectuals that reality and truth don't even make them pause, and both seeming to expect everyone else to join along willingly.

But the right needs a a comforting Daddy-figure in these dangerous and impoverished times, not the political equivalent of Michael Scott and Dwight Schrute in The Oval Office.

Mitt Romney’s advisers are orchestrating a four-day Republican National Convention that is not so much designed to make Americans fall in love with the nominee, but rather to fall in like with the idea of him as the nation’s leader and a uniquely qualified businessman who can fix the economy.


The decision to focus heavily on Romney’s career background and economic policies is a departure from most conventions, which tend to mainly try to build a personal connection between the candidate and voters, especially for first-time nominees. It is also a tacit acknowledgment that Romney cannot win over enough swing voters by highlighting his personality and telling his life story alone.


Republicans are  going to demand that everyone obey their authorities and vote for the Mormon stiff and the Catholic brown-noser. Their followers will do it but their pain will be amusing palpable.

Rmoney's business skills seem to be the ability to loot and destroy businesses. It'l be interesting times if he wins.

If there is anything the Repugs have made clear to us, no matter how abominable they are, they CAN and will behave worse.

Most of us call that a clown show.
~