The Mediocrity Of The Douthat

Shorter Ross Douthat: Representing your female constituents and responding to their requests is paternalism.

The "Shorter Ross Douthat" formula is far kinder than Douthat deserves. His article is a laundry list of right-wing daily outrages such as the Julia slide show, Sandra Fluke and Lena Dunham. Douthat is duly incensed that Obama sinks to pandering to women by reminding them who is the lesser evil.

But given the way Obama’s once-enormous edge among female voters has shrunk in many polls, tomorrow’s feminists may look back on his campaign’s pitch to women and see a different theme emerge: a weirdly paternalistic form of social liberalism, in which women are forever single girls and the president is their father, lover, fiancé and paladin all rolled into one.

Douthat's link leads to an unsourced Politico article. Recent polls say Obama's numbers have risen among men and, more important, are still higher than Romney's in swing states. Elites are funny people; they are so accustomed to being told that they are leaders and bred for greatness that they tend to underestimate everyone else. Douthat and others (cough:McArdlecough) assume that their readers will either not read the links, not understand the links, or not care if the links contradict their article.

Douthat attempts to manipulate the poor, weak dears by telling them that Obama is oppressing them with his maleness and sexuality and condescending belief that he knows what is best for them.


This paternalistic pitch assumes that liberalism’s traditional edge with women is built mostly on social issues, and that Democrats — especially male Democrats — win when they run as protectors of the sexual revolution, standing between their female constituents and the Todd Akins of the Republican Party.

Douthat goes on to say that women have always preferred the Democratic party because they are communal, no doubt because they are motherly and nurturing and cannot deny their biological imperative to cling to a man and bear his children. Men, Douthat says, are individualist--ruggedly so, no doubt--and therefore support Republicans, which contradicts the latest poll information.


An imaginary Republican plot to ban contraception, the illusory threat that Mitt Romney would ban abortion in cases of rape, a wave of faux-chivalric outrage over Romney’s line about “binders full of women” — in a tight-as-a-tick, economy-centric election, this is the message that Obama is relying on to push him back over the top.

Perhaps it will actually work. Perhaps the Electoral College will save the president. But I’ll just say this: It’s awfully hard to imagine Hillary Clinton closing out a campaign this way.

It's just a coincidence that the Catholic Church has allied itself with the Republican party, and it doesn't matter what Mitt says because he takes both sides of every issue, depending on whom he is talking to.

This isn't the first time Douthat has attempted to use an enemy's strength against him. Predictably, chaos ensued, because Douthat is a mediocre hack who thinks he commands great persuasive powers over the foolish masses. He's unable to use Obama's real weakness against him; namely, that despite the fact that Democrats elected a Democratic president, legislature aiming to limit abortions still sky-rocketed, and that Obama refused to offer Plan B over the counter to girls under 17, the ages most likely to get impregnated by incest. 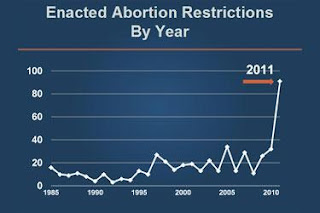 The right can't attack Obama on his many abuses because they approve of them, and thus they will probably lose to a man that they despise so much they can't even see how much he agrees with them.

LGM also has a good post on that dreadful column (and it's worth reading the thread for a troll smackdown). Douthat can never be skewered enough. Another whiny plea for right-wing authoritarianism.

What amazes me about Douthat and McArdle is their mediocrity and the very thin line separating them from the winger pundits. Better education and vocabulary, a few links, and suddenly they're geniuses.

Luke Russert also insists he's gotten ahead based on merit and gets indignant when anyone suggests otherwise. It's a defense mechanism. The Emperor's New Clothes isn't just a story, it's the eternal ethos of the ruling class.