If At First You Don't Succeed, Lie Lie Again

Ho hum, Megan McArdle lied about her conflicts of interest again. I noted these passages last week but I want to emphasize the lying. It still amazes me every time she gets away with this stuff.

In fact, the conversation I'm alluding to concerned a young woman who was home-schooled before attending a small Christian college, which the reviewers of her application dismissed as a place of “right-wing religious fundamentalists” that was “supported by the Koch brothers.”


Full disclosure: My husband works for Reason magazine, which has received some funding from one of the Koch brothers, and before we were married, he had a one-year fellowship with the Charles Koch Foundation.

How Megan McArdle sees herself and her fellow libertarians: 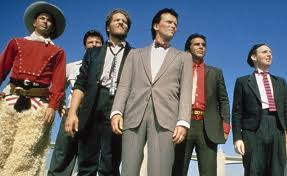 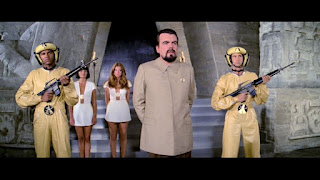 
They say love of money is the root of all evil but the love of ego gratification might be even worse.

Megan McArdle, recipient of bounteous Koch largess, does not want to be known as a person who owes her success to the wide net cast by the Koches while fishing for little minions to do their dirty work. It's embarrassing and might (probably not but might) harm her job prospects at this stage in her career.

I could spend a week looking up all of McArdle's Koch ties, the ties that she is willing to lie to hide, but Yasha Levine has already done it:

In 2012, McArdle served as a judge for the Reason Foundation Bastiat Prize, awarded to libertarian media pundits. Reason Foundation is closely linked to the Koch think-tank network and is funded in part by a number of different Koch foundations. (She has served in this capacity for a number of years.)

In 2011, McArdle took part in a Cato Institute panel called "U.S. Debt and the Millennials: Is Washington Creating a Lost Generation?" She described Social Security and Medicare as a "gigantic space alien that's larger, like five times the size of earth."

In October 2011, Mcardle was honored by being chosen to emcee Charles Koch's 50th Anniversary gala celebration of his flagship libertarian think-tank, the Institute for Humane Studies, featuring Charles Koch as the keynote speaker and guest of honor. McArdle and Koch were joined by hundreds of leading GOP donors and activists. An IHS newsletter wrote of her performance: "Emcee Megan McArdle wove a humorous narrative through the program." The IHS attempted to hide McArdle's involvement, scrubbing her name from the dinner announcement page.

In February 2011, McArdle was the keynote speaker at the annual International Students For Liberty Conference, where she delivered a talk titled "Building the Case for Liberty in the New Century." The conference included a sneak preview of the film Atlas Shrugged.

In 2011, McArdle was a guest lecturer at the Institute for Humane Studies' "Journalism & the Free Society" summer seminar program. The program tackled such topics as "Is an 'objective' press possible — or even desirable?" Other faculty members joining McArdle that year included Radley Balko, then-editor at the Kochs'Reason magazine

In 2010, she was a moderator at a Mercatus conference about credit card regulation. Koch Industries funneled a combined $3.7 million to Mercatus in 2007 and 2008. The Wall Street Journal called the Mercatus Center "the most important think tank you’ve never heard of.”

In June 2010, McArdle married fellow Koch activist Peter Suderman. Suderman spent much of his adult career on the Koch payroll, rotating through positions at America's Future Foundation, Competitive Enterprise Institute, FreedomWorks, as well as the Moonie-owned The Washington Times. Suderman is currently a senior editor at Reason magazine.

In June 2009, McArdle served as moderator at a Cato Institute's healthcare reform conference. The title of McArdle's panel was: "Should Congress Mandate Coverage?"

In Spring of 2009, McArdle served as a judge for a Koch-funded blogger contest held to identify "young conservative and libertarian talent who wish to pursue careers as journalists and writers." The winner received a $10,000 prize. Other judges included Cato/Reason's Radley Balko, Jonah Goldberg, and libertarian economist Jonathan H. Adler.

In January 2009, McArdle was a speaker at an America's Future Foundation (AFF) event that featured "young libertarians and conservatives who have taken a leadership role in . . . re-branding the Republican party." AFF is a libertarian organization that exists to "identify and develop the next generation of conservative and libertarian leaders." It has close ties to the Koch-funded think-tank network, including Mercatus, ALEC and Institute for Humane Studies.

In September 2008, McArdle took part in a panel discussion at AFF about "who should libertarians and conservatives support." That same month, McArdle was a featured speaker at an anti-regulation event hosted by the Koch-funded Mercatus Center at George Mason University. Her talk focused on how "government regulation actually contributed" to the financial meltdown.

In the mid-2000s, McArdle received journalism training from the right-wing Institute for Humane Studies, headed by Charles Koch since the 1960s. According to the IHS, its journalism program "places talented writers and communicators—who support individual liberty, free markets, and peace—at media companies and non-profit newsrooms" and offers "mentoring and job placement assistance." The program currently includes a $3,200 stipend, as well as travel allowance.

If McArdle were a real journalist she'd be forced to print the longest disclosure  of conflicts of interest on the face of the earth. Fortunately for her she is not and she can skip disclosures altogether and throw her husband under the bus to save herself.

So many points for name-checking Buckaroo Banzai.

You never knew what would happen next in that movie. Plus it has one of my very favorite quotes: No matter where you go, there you are.

"What's that watermelon doing there?"