Shorter Megan McArdle: There's Alway A Breeze In The Windmills Of My Mind

When time is short, do shorters.


Wal-Mart's Wage Experiment Works ... for Workers: aka Look Mommy, I Can Knock Down A Strawman! Silly people, Wal-Mart wages can't replace factory work. Wal-Mart can't adopt Costco's business model. It's not profitable to pay people anything but "the lowest wage you can get away with paying." Once raised, wages can't and aren't cut.


Misbehaving Consumer Agency Gets Sent to Time Out: [I can't even.]

Me: This post is so incredibly aggravating that I couldn't encapsulate it. I wasted one week trying to approach it rationally and ended up walking away, enraged, every time. It's so unbelievably condescending, wrong, and misleading that I gave up. Read it if you must but I warned you.


Five Types of Voters, More or Less Loyal to Trump: How many Trump voters will retaliate against me and my elite brethren? How many seats will be lost down-ticket? It depends on the honor of Trump voters.

Me: Good luck with that.


Innovation Falls, and Retirees Pay the Price: When the population ages, productivity falls. Therefore senior should get accustomed to seeing their standard of living go down.

Me: At the bottom of the report she linked to, the author(s) note "employment at older ages could prevent these losses to some degree." And guess what? Thanks to our wonderfully perfect free market economy, older people are working longer. Even more perfect, the number of old women working has increased more than ever before! 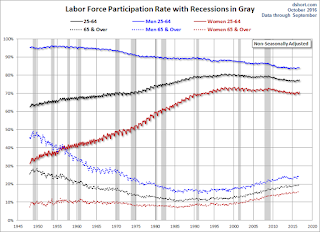 McArdle must be so relieved.


First Lady's Garden, Like Obamacare, Will Prove Hard to Uproot: Isn't it amusing that Michelle Obama is trying to preserve her legacy as First Lady by making the White House garden more permanent? Don't you think Social Security should be paid out of general revenue? Wouldn't it be swell if Republicans removed and replaced Obamacare?

Me: Sorry, princess. Your party is the party of Trump, and all the power fantasies in the world can't make that cold, hard, groin-grinding fact go away.
Posted by Susan of Texas at 10:27 AM

That third link is beautiful. To spare everyone else the mango hunt, her categories are:

So I hope you were expecting some manner of armchair demographic analysis (and stupidly, I kinda was). And then:

The problem is, no one knows exactly how big any of these groups is. Republican politicians essentially have to make a blind bet: Do I lose more swing voters by sticking with Trump, or more base voters by defecting from him?

So her conclusion is a shrug. She was paid to write this. According to Bloomberg, this is worth money.

Proposed for the second item:
"A panel of the D.C. circuit court has ruled that the Consumer Financial Protection Bureau, a creation of Elizabeth Warren based on the strange idea that citizens need to be protected from bankers, which is like saying that young women need to be protected from Donald Trump, irrational and insulting, has an unconstitutional governance structure. Sadly, this will make no difference to how it operates, but it does give me an opportunity to whine about it and display the sophistication I believe I have in legal matters."

Shorter Megan - nothing can be done to help the poors.

Walmart's profits have not immediately improved so paying people more is a failure.

There is a vast gap between Megan and people like me. I think that a corporation has some responsibility to act in the interests of the society it inhabits, if only for self preservation. Here in Bloomberg we see another failure of Walmart - https://www.bloomberg.com/features/2016-walmart-crime/. Walmart is a social parasite. But that's OK because someone is rich because of it.

One of the biggest problems with McArdle is that the lies or omissions or bad information are too numerous to reveal. That Wal-Mart post was especially annoying because, as Mike McCarthy points out, Wal-Mart doesn't hire enough employees to maintain the stores, let alone enough to cut profits, and doesn't maintain a visible security force. They have been forced to improve pay to improve revenue.

Yastreblyansky: Perfect! (Good god, that post was horrible. And according to some people, the change in accountability won't kill the Bureau and might help it overcome the inevitable next round of challenges. Like Obamacare, they won't stop until it's gone.

Andrew Johnston: Best gig ever. She is a busy little beaver, giving speeches here and there, syndicating her column, and doing interviews and such, but her blog (her primary source of income) is like an afterthought.

Mike McCarthy, you need to catch up on your reading/watching of Free to Choose and The Road to Serfdom, like Megan did. Then you will finally understand how poor people are the only social parasites and taxes are theft (well that may require reading some pre-recantation Nozick), and economic freedom to squash the poor is the only real freedom