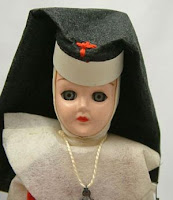 Ignore the glassy stare. K-Lo hasn't been the same since she saw the pope in person.

We are all astonishment that Miss Kathryn Jean Lopez, she who has so often and with such passive-aggression attacked The New York Times, agrees to soil her reputation and place herself in its evil clutches by appearing on its pages. She has said that they push pro-choice stories, they are "moved by adulterous connections" (whatever that means), and seldom passes up a chance to denounce how liberal they are. Isn't she afraid of what contact with such a virulently liberal newspaper would do to her soul? Doesn't she care about eternal damnation at all, or did vanity and ambition seduce her into accepting their offer to appear in its sleazy silk pages, reeking of liberal sexual abandon and the fluids of moral decay?

On Aug. 13, President Obama held a Ramadan dinner at the White House and announced that “this is America, and our commitment to religious freedom must be unshakeable.” This is a statement I absolutely agree with, and I wish that Western countries would be inspired by the hat tip to our founding principles.

Which is why she wants to eliminate religious freedom for everyone else; so she is free to enforce her religious beliefs and rituals on everyone else. Remember, freedom means nothing if you aren't free to take it away from other people.

When you’ve taken as many positions on as many issues as Obama has, you start to lose your credibility..

I think she's having an Ovaltine-induced hallucination here. John Kerry was the flip-flopper, Obama is the socialist menace who can't wait until we're all living under Sharia. Get with the program, girl.

The president went on to say, “I believe that Muslims have the same right to practice their religion as anyone else in this country. That includes the right to build a place of worship and a community center on private property in Lower Manhattan, in accordance with local laws and ordinances.”

I agree with that, too. I’m a Catholic who sees threats to religious liberty increasing here at home -- largely by judicial legislative fiat -- and I'm earnest about ensuring its protection for us all.

The woman wouldn't know a fiat if it ran her over. She, like Jonah Goldberg and the rest of her dim-witted brethren, does not understand what judges actually do. Let's hear Goldberg's view of the legal issues involved.

In any decent society, tolerance must work both ways. If the majority is expected to show respect for a minority, the minority must also show some tolerance for the values of the majority. I’m no strict majoritarian – one with right on his side is the majority as far as I’m concerned. But this isn’t a clear-cut issue of right and wrong. It’s more complicated than that. It’s about deference and decency and common sense.

That's right, the law doesn't even figure into it. It's all about his feelings, and if they are being deferred to. It's all about feeling superior to others, feeling swollen with immoral pride and vanity, being the biggest kid on the block that can shove everyone around and make them thank you for it. More Jonah:

Indeed, listening to all of this talk about “crowd” politics from liberals these days, you get the distinct impression that there are a lot of 20-something liberal bloggers, MSNBC talk-show hosts, and newspaper editorial writers who honestly believe that they are not only better than the American public but that they are in fact the duly anointed conscience of this, our embarrassingly backward and bigoted nation. They must stand ever vigilant, lest America’s deep reservoirs of hatred and bigotry burst their levees and spill out through the sluices of the Republican Party.

There is nothing we can say or do that will get them to acknowledge their natural human faults, their immorality based on lack of empathy, or their lack of ability to reason and advise. Nothing. They are damaged people, who are easily manipulated and who take out their anger and fear on everyone around them. Corporate America merely added political advertising to corporate advertising, and the same people who bought granite countertops because everyone else had them or drove to Nascar races covered in corporate advertising, eagerly and easily voted for/bought the latest political product. And God's Littlest Missionary, who bought everything she was ever told by parent, priest or political party, is given space in the New York Times to tell us that we are only free if we can deny other people their freedom.

But I also think that to build an Islamic center near ground zero is an imprudent move. If Islam had a pope, he might advise the Cordoba House developers as much, just as the late Pope John Paul advised Polish sisters not to build a convent at Auschwitz (my friend Bill McGurn wrote well about this in The Wall Street Journal). It is not a surrender of freedom to be sensitive. It is, in fact, a reverent exercise of freedom.

For her. Not them.

President Obama, of course, did not say any of this at his Ramadan dinner. Instead, the following day, he said: “I was not commenting, and I will not comment, on the wisdom of making the decision to put a mosque there. I was commenting very specifically on the right people have that dates back to our founding.”

He was addressing the legal issue, the irrelevant one, instead of the important issue, which is how conservatives feel about themselves. Silly man.

How can President Obama navigate this contentious issue given the opposition of Senator Reid and other Democrats?

How can anyone go against the tribe? How? Sweet Jesus, doesn't he understand that if you don't have someone telling you what to do at all times, you'll explode in a sex-drugs-and-rock-and-roll-fueled murderous rampage?

The quick answer is that he could change his position very easily, since he doesn’t have one. But when you’ve taken as many positions on as many issues as the president has, you start to lose your credibility.

If the president were to try to clarify himself a third time to say that he thinks a Hamas-endorsed Islamic center near ground zero run by an imam who cannot bring himself to condemn the terror group is inappropriate, then we might have a semblance of leadership on our hands. But reread President Obama's Cairo speech. I’m not holding my breath.

Lopez's fears are more important than the law. All Muslim people are terrorists. All Muslims are our enemies. Obama is trying to impose Sharia law on the US. Obama is a Muslim.

William F. Buckley must be so proud. As the model for conservative deportment, his bigotry, dishonesty, and rampant public abuse of anyone he personally disliked has created a party of war-mongering, immoral idiots spouting rhetoric with no connection to reality.

And the so-called liberal New York Times published their work, takes their ideas seriously, and advocates for their wars and starvation taxation. It publishes Lopez next to Glenn Greenwald, as if a woman who cannot edit, write a coherent sentence, or think is an adequate response to a constitutional lawyer. But what else can they do? Anyone with even a shred of intelligence, morality or understanding has left the party, and simple-minded neurotics like Lopez, Goldberg, Glenn Beck and Sarah Palin are the best they can do.

Note: Joke removed because it sounded too familiar.
Posted by Susan of Texas at 9:59 AM

My feelings are hurt that the radicals on the right fail to read and comprehend the Constitution. So I think they should be kept from sharing their innermost drivel .. er .. thoughts in any medium in future.

(May I also just add that I think this whole silly thing is a big part of the reason why American can't be marginalized soon enough? We're a nation that can devote huge energies to a question that shouldn't even be asked, but we can't find any time at all for something like a meaningful energy policy. With each passing day, we're showing the world that we're too immature to sit at the grown-up table.)

Yes, Kathleen and Jonah and their little friends believe they are the lone advocates of sensitivity and courtesy in a crass, rude, Liberal-dominated media.

When they are actually a key component of a gigantic, milling flock of Fox-brainwashed yahoos who automatically bleeeeeat whatever Rupert tells them to.

So because a few loonies with a whacked-out interpretation of Islam attacked America, the whole Muslim religion must suffer?

If K-Lo's going to take that position, she'd better be careful.

After all, so many crimes and atrocities have been committed in the name of Christianity--and Catholics have been right at the forefront-- that if we follow her logic, NO Catholic church should be allowed to be built anywhere, anytime.

K-Lo and J-Dough's only "principle" is that they should always get their way. If K-Lo were honest, she'd just say "Everyone should conform to my vision of Catholicism." That's really her underlying argument most of the time. Plus, pearl-clutching as a tactic.

How about that McDonald's right near Ground Zero in Hiroshima? IS THAT NOT AN AFFRONT TO JAPANESE SENSITIVITIES???

I mean, this country DID kill 100,000+ of their citizens in a single attack, and McDonald's being a symbol of Real America (and probably a religious icon to some), well....

Anyone want to bring this up with Newt Gingrich?