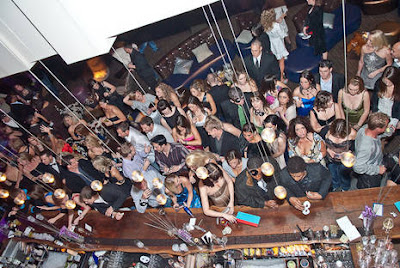 Like Megan McArdle, I live in the middle of a big city, surrounded by a mix of commercial and residential properties. I live close to several bars and have observed my neighborhood go from slightly seedy to slightly gentrified. The yuppies (as they were called then) happily bought up the relatively inexpensive houses but immediately began bitching about the noise and traffic. So when I read this:

A nearly perfect house became available. The house we're buying is on a street that I fell in love with the first time I saw it. It's located close to Big Bear Cafe, the neighborhood's single biggest draw. Many of our friends live nearby. The engineer said he loved the house. We can live in it immediately and renovate as we have the cash. And the price is in a range that we can afford.

I knew one day I'd be reading this:

One possible solution is upzoning--neighborhood bars aren't so obnoxious when you're ten floors above them. But of course, the local residents tend to fight that as well.

Libertarianism in theory always sounds great, but in practice it is meaningless. People don't want loud bars in their neighborhood. Bars want to open in places without bars. Both can't get their way. There is no libertarian solution because we are not rugged individualists who just want to live our lives without anyone forcing us to do anything. If the laws don't allow, you can't put bars wherever you want. If you want to let bars in your neighborhood there is no way to ensure they will be tasteful and quiet. The only thing to do is hope that people won't be selfish and obnoxious, which is something that libertarians usually endorse. Just think--if there weren't so many libertarian-types in the world, libertarians could get what they wanted.

Well, whaddaya know. Sometimes life actually is fair.
Posted by Susan of Texas at 10:04 AM

Is she talking about her husband? He's an engineer now?

I think that's the previous tenant?

What gets me about Megan's writing is that its so terminally predictable: she is her class position. Her subtext *is* her text. I'm pretty sure I've said this before but she's Cordelia in the scene where Buffy can read people's minds and we discover that Cordelia's internal thoughts are her external statements. And the thing that is really funny about this is that it makes Megan's writing even more childish than her beliefs necessitate--she has no idea why she says what she says (she thinks her tastes and her dispositions (her "habitus" as Bourdieu would call it) is totally unique and personal but its utterly overdetermined by her social set and her particular moment in social time and space.

Now I'm imagining Paul Krugman as Giles, Elzabeth Warren as Buffy, and the IMF as the Watcher's Council.

In this area, likely the inspector.

Libertarianism in theory always sounds great, but in practice it is meaningless.

Amen, sister. First, because, as in this case, it pretends society (i.e., other people) doesn't exist. "Look, I'm willing to succeed or fail strictly based on the use of my own talents. So everyone get out of my way."

And also because in every case it pretends that other people in the past (i.e., history) never existed, either. "Okay, we'll all begin HERE, at the starting line. Then the gun will go off, and everyone will use their own talents to run as fast as they can, without outside help or interfer--Hey, wait a minute. Who are those people a hundred yards down the track already?"

(Not mentioned: "And why do those people a hundred yards behind me have ball and chains affixed to their ankles?")

What's wrong with having your cake and eating it too??? That's what Ms. McArdle would like to know.

Fish, yes, I think you're right.