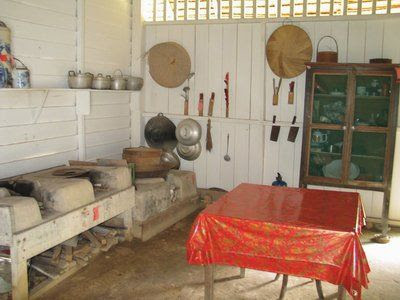 
If Megan McArdle were a rapper her pseudonym would be Credulous. The Chinese government takes her and other reporters on a show tour of a Chinese farm and she thinks she's seeing the real China.

The farmers we visited are, we're informed, about average for China these days. They have running water, electricity, and cable television. Each person farms about 1.5 mu, or roughly a quarter of an acre, with three seasonal crops: two of vegetables, one of rice. The fact that they can get three crops out of that little amount of land tells you why China has so many people.


The annual income per person is about 10,000 RMB, which has allowed a fairly massive upgrade of lifestyle for the villagers--most of the villagers seem to have their own homes, with new appliances. The journalists gawked at the small one-room dwelling that had once been the main house, and now served as a kitchen; the host, clearly embarrassed, hurried us into the three story house he built himself four years ago, replete with shiny tile and new furniture.

McArdle is impressed yet wonders if the government will end subsidies to farmers, unlike in the US. (She does not note that most subsidies go to large corporations, not small family farms, as her good buddies at Cato and Heritage could tell her.)

McArdle is also told that Chinese statistics "don't always agree." Other economics writers have noted that there are "lies, damned lies, and China's statistics," but that doesn't occur to our "journalist."

One of the enduring mysteries of the Chinese economy is, well, all the enduring mysteries about the Chinese economy. Which is to say, good statistics are very hard to come by. The other day, I spoke to an economist who said that after a long period when wages lagged economic growth, they were finally moving in the other direction, growing 30% a year.

For wages to be growing that much faster than the economy, something else must be growing slower, and I endeavored to find out what that something was. Were profits growing more slowly? No, they were growing faster than ever.

Could this be reflection of the inflation rate? Assuredly not, he said. These were real figures, not nominal.

Which leaves us with something of a mystery. As he admitted when I, convinced I was not understanding something, pressed him: "The figures," he said, "don't always agree."

The lack of good economic statistics often makes it hard to know what's going on here. It's tempting to measure progress by the breakneck pace of construction, which you can see, rather than the pace of economic activity, for which you have no good measurement.

This would be a problem anywhere. But it's a particular problem in China, because the government directs so much economic activity here. It is not exactly central planning any more, to be sure, but nonetheless, government here seems to be much more actively and enthusiastically behind everything from new construction to how much lending activity goes on.

McArdle also writes a few posts about excesses in airline security, since she has just flown. One of the articles expresses concern for pregnant women fliers who don't yet know they are pregnant. The Baby Watch continues! If she is trying to think of names we suggest Hayek Cato if it's a girl and Milton Pinochet if it's a boy. Your own suggestions (in the comments) will be most welcome.
Posted by Susan of Texas at 9:45 AM

Surely it's Dagny for girls and John Francisco for boys?

Do you suppose, having seen the wonders of China, that Megan will now recommend more central planning of the US economy?

I think the only central planning that McArdle cares for is the kind that benefits her personally. She seems to be in favor of trains right now despite the fact that they have yet to be replaced by private enterprise.

Take a bus between any two major cities and tell me if you see a lot of three story houses on those farmlands.

Milton Pinochet is a winner so no point in even trying.

Wonder if she's ever heard of a Potemkin village? I'm guessing not.

Wait. Is McMegan pregnant or is she just trying? How did I miss this?

Each person farms about 1.5 mu, or roughly a quarter of an acre, with three seasonal crops: two of vegetables, one of rice. The fact that they can get three crops out of that little amount of land tells you why China has so many people.

This woman has no actual real life knowledge.

the host, clearly embarrassed, hurried us into the three story house he built himself four years ago, replete with shiny tile and new furniture.

has anyone else here read Rock Paper Tiger? It contains several descriptions on how everything in china is coated with with tile to the extent that everything looks like the inside of a bathroom. This sentence just reminded me of that.

Tbogg, sadly I am just speculating. I have nothing to go on but her tendency to post about whatever is floating mistily through the windmills of her mind.

I think "Entitled" is a great name for a boy or a girl!

So many naming options - you can go with the obvious (Randy McSuderman), snotty and British (Churchill Aston Martin McSuderman)or Palinesque (Hollowpoint McSuderman).

Hi Susan, I discovered you through fishy mcfisherson's blog. I totally admire you; I can hardly ever bring myself to look directly at the Lovecraftian horror that is McMegan's opus.

I disagree with fish, though. She cannot possibly believe that you can subsistence-farm a quarter of an acre and have enough to sell to make a living even in China, cannot possibly. She must be lying.

The comment about the subsistence farming makes me think she thinks China is Japan and Holland rolled into one. They have, she thinks, intensive agriculture and that is why they have so many babeez. The whole "one child policy," forced abandonment of baby girls, and general rural poverty seem to have escaped her notice.

It's worth noting that what tips our little nitwit off that "something must be wrong" is the fact that WORKERS!!!! are actually benefitting from China's economic growth.

As a highly trained hack, she knows--absolutely and surely--that the only possible way for workers to benefit is if the economy is on some massive self-destruct cycle.

Huh? I had thought it was common ground among all civilized peoples that she's usually pretty damn trying.

I wonder if she thinks that what she's doing in China qualifies as actual journalism. All she knows is that she saw a real Chinese farm with her own eyes, and that she gets to quote real live random Chinese people. She's going to come home an expert on all these things Chinese. We can count on that.

in 1999, we went to Chin as part ofour Exec MBA program at NYU. They showed us the same potemkin village: a spotless house with all modern facilities including a great stereo system playing Pink Floyd. In Tianjin!

he game was lost when we learned that the listener of Pink Floyd did not speak English. Our Dean, who accompanied us, told us they showed him the same house the previous year as well - the owner was different though.

That McMegan would fall for this is not surprising at all.

I'd usually let this sort of thing slide, but Megan is all up in my business now.

So I used to teach classes in a school in a farming village about 50 miles outside of Changchun City. There is no fucking way that the house being described by McArdle is owned by an actual farmer. Houses in farming villages are pretty much what you'd expect: One story, maybe three rooms, concrete floor (though I have seen buildings with bare dirt floors). A house like the one McArdle is describing would likely run for hundreds of thousands of RMB (depending on location) and I have a really hard time believing it could be done by one man, or even a man and his family. Construction in China isn't any different than anywhere else - contractors are involved. Sure, it doesn't take specialized skills to raise walls and reinforce them, but running power and water lines into the building is another story.

Also, like the anonymous poster above, I was rather amused by her implication that tile = wealth. No, dear, carpeting = wealth. Carpeting is rather rare in China, even in apartments and houses. Tile is favored as its easier to clean.

Finally, Susan: Don't even kid about McArdle reproducing. I'm afraid if I think about that too much, I'll have an aneurysm.

Love your blog, by the way- great work!

McMegan in post: "The farmers we visited are, we're informed, about average for China these days."

McMegan in comments: "I don't know. I've been in china for less than ten days, so I can hardly start commenting on what's common. :)"