Megan McArdle has seen Obama's tax cuts, and after reading what everyone else thinks about them has come to a conclusion: The rich are being ripped off.

We have an awkward tax structure, to be sure--if you were designing a code from scratch, you probably wouldn't set it up this way. However, the payroll tax isn't particularly different from what the tax code looks like in many places in Europe--most people pay a broad, low rate, and then the carriage trade pays something more progressive. And it has grown over time largely in support of two social programs much beloved of progressives. If those programs were smaller, the employment taxes would be, too.


To me, [Felix Salmon's] chart shows how dependent the US federal tax take is on income taxes on higher earners, which tend to plummet precipitously in recessions, and are at historical lows simply because we're in an exceptionally bad recession.


Even the things that presumably worry progressives, like the lower revenues from corporate income taxes, are to some extent simply showing up elsewhere, as taxes on capital gains income. But you can't complain about this, and also complain that tax revenues are so low right now; broadly, the most stable taxes are also the most regressive--they're the taxes on necessities. In bad times, non-luxuries tend to get cut back and then so does your tax revenue.


This chart doesn't show the things that are really badly wrong with our tax code, like the massive inefficiency of all the deductions, and the punitive imputed marginal tax rates faced by poor workers who lose benefits as they gain a little income.

Evidently McArdle also does not know that the "poor workers" who see their taxes go up are making more money and are only paying higher rates on the amount of money in that given bracket.

For McArdle, making more money and moving into a higher tax bracket is a tragedy, not the attainment of the American Dream. It is a wonder that she does not quit her job immediately and live on the streets, where she wouldn't have to be punished for making money. Or she could go work for the Podunk Times And Courier, who would pay her much, much less and relieve her of the burdens of a higher tax bracket.

But make no mistake: Obama's tax cuts are a good deal for Democrats:

With the wailing and gnashing of teeth from many progressives, you would think that Obama had cut a deal to eliminate taxes on the wealthy in exchange for freeze-drying Guatamalan orphans in order to use them as decorations on the Family Research Council's Christmas Tree. Meanwhile, the conservatives I've seen are as proud of this deal as if they'd baked it from scratch.


I'm puzzled on both counts. Let me get the personal stuff out of the way: I think this is a terrible deal. I was rooting for gridlock to cause the tax cuts to expire entirely, which would probably have a moderately negative impact on the economy, but would at least somewhat forestall a devastating fiscal crisis down the road. If it was politically necessary to do tax cuts, I wanted them to be as small as possible, not $900 billion over two years.

Starve the government to drown it in the bathtub.

To be sure, this is a better deal, from my perspective, than it might have been. All the tax cut extensions are temporary, rather than permanent. We get a temporary extension in unemployment benefits, which I favor, given the lousy jobs picture. Some of the tax cuts, especially the temporary cut in the payroll tax, might even be stimulative. Nonetheless, I would much rather they had expired entirely than that we re-fight this battle in two years, when most of the parties are up for re-election. We may get that fiscal crisis even sooner than I thought.


But from the point of view of Democrats, this actually seems like a relatively decent deal....it looks like the Democratic proposals got more money than the GOP proposals, even if we leave the "middle class tax cuts" out of it.

Because the economic health of the nation is just another political game to win or lose.

So why are progressives so enraged? I'm not seeing a lot of complaints about austerity; rather, they simply seem to be mad that the Democrats were not able to thwart the GOP entirely. As Clive Crook says, "But is it really good politics for the party to keep telling the electorate that raising taxes on the rich is the one thing, in the end, it stands for? That nothing else comes close in the party's list of priorities? Because this is the message that comes across."

Both sides, of course, are exposing themselves as the rank hypocrites they are on fiscal priorities. To say I despair for the financial future of our government is too weak.

Where was all this despair when the banks were being handed billions of tax dollars?

But McArdle isn't done yet--

Greg Mankiw and Bryan Caplan make the same point about Obama's payroll tax: it might better have been done on the employer side....

Given the terrible jobs figures, it seems obviously more important to me to pick the tax that is most likely to stimulate employment. Employed workers are mostly doing fine in this recession; it is the unemployed who need help, desperately.

Employers say that lack of demand is keeping them from hiring. This is not a secret.

USA Today wrongly told readers that: "private employers are uncertain about the economy's health and are hesitant to add jobs." The uncertainty of businesses does not explain their reluctance to add workers. If this were the case, then businesses would be increasing the number of hours worked per worker. While average weekly hours are up somewhat from the low hit last fall, they are still down by 0.7 hours from their pre-recession level. This indicates that firms are not hiring because they have no need of additional labor.

From the Washington Independent: 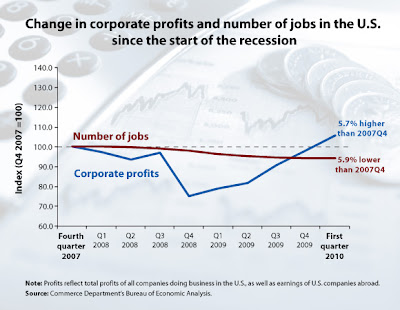 But I see the payroll tax as a fundamentally political move, not a serious attempt to fix the economy.

Cutting payroll taxes on workers means they will notice a little more money in their paycheck, and be happy with Obama. The unemployed won't be any happier, of course, but they have extended benefits, and few of them will realize that a differently structured tax cut might have given them a slightly better shot at finding a job.

Only if some hack lies to them and tells them it's Obama's fault that they don't have a job.
Posted by Susan of Texas at 12:19 PM

Apparently the concept of tax brackets is unfamiliar to all reporters/commentators/talking heads. I have not heard one even mention them. But then tax brackets are so hard to understand for those f'ing idiots.

How do they work?

Wait, she "wanted the taxes to expire" because of fiscal sanity reasons and then she's bitching that Democrats are complaining that the tax cuts are "Funding Republican Priorities?" Does she not grasp that "Republican Priorities" are, in fact, keeping the upper income tax cuts?

Heh, I think that alll the time when reading her work.

"and saying nothing about the much larger sum we're spending on a Democratic agenda"...you know, that fucking agenda of theirs where they want to prevent unemployed people and their families from being thrown out onto the street. The Democrats, always with their agenda of stopping children from starving.

Low income families don't generally pay federal income tax at all. What changes with income levels is the amounts of refundable credits - EITC & the Child credit being the major ones.

I refuse to wade though all the comments & garbage to understand how in Meganspeak credit phaseouts became "imputed marginal rates", but they are not the same as the marginal rates on the tax table.

The Democrats, always with their agenda of stopping children from starving.

To be fair, that agenda also includes the very expensive act of blowing up brown people's children.

Downpuppy, I miss so much stuff out of ignorance or time constraints. (Mostly ignorance.)

She's even worse than she appears.

I've been a tax accountant since the Meese administration, and still miss stuff.