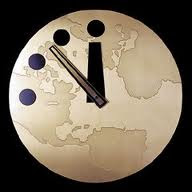 Posting will be very light until after Christmas.

As the end of the year comes creeping up on us with little cat feet, Megan McArdle has been working on the definitive economic critique of Elizabeth Warren for almost five months. In that amount of time Glenn Greenwald could have written a couple of books, tossed off tens of thousands of blogging words and appeared on tv a few dozen times but hey, Megan McArdle is no Glenn Greenwald.

(Part one of a two-part series)

The progressives seem to have made Elizabeth Warren their cause-du-jour. I have a long and complicated history with Elizabeth Warren, so allow me a moment to offer my long and complicated thoughts on her. Really long. So long that I had to break it into two parts--scholarship and public life--in order to prevent the nausea, daytime sleepyness, and intracranial bleeding that might otherwise result. Consider yourselves warned.

Oooh, shiver me timbers! We have been warned, but oddly enough we are still waiting for the hammer to fall. McArdle might have found a back-door way to sneak into her Elizabeth Warren critique without anyone noticing, however, for she is currently trying to claim that medical bankruptcies weren't all that bad anyway, no matter what people who will remain unnamed might say.

People going bankrupt don't pay their medical bills because it's for services already provided. That ranks right below everything else on the priority list. Now, income lost due to illness is a common cause of bankruptcy, but health insurance or not doesn't really change that.

Of course, I've also heard that they're underrepresented because people put them on credit cards. Which just illustrates how hard it is to determine what "causes" bankruptcy. In some cases it is clear cut, but in many there is a string of bad luck and bad decisions leading up to the final outcome.

Everything is too hard and nobody knows anything. McArdle might want to read Warren's testimony before Congress to see how science tackles a problem; it seems that while we might not know everything, we can learn quite a lot and then take action to relieve suffering. Just because McArdle can't do math doesn't mean the rest of the world is handicapped in that respect.

But then McArdle would have to think about others' suffering, and she doesn't like to do that. 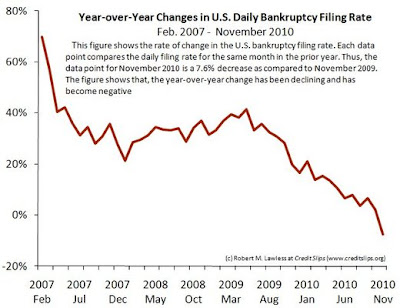 This may be evidence on a question that has puzzled bankruptcy experts--was the precipitous decline in bankruptcies after the 2005 bankruptcy reform act real, or was it simply a lull before the storm? Everyone agrees that the initial drop was a result of a lot of bankruptcies being moved forward before the law took effect--everyone who thought they might need to declare bankruptcy did. But there has been a lot of analytical effort put into trying to figure out what was going to happen later: would they stay low, or would they inexorably go back to their old level? Obviously what you think depends on what you think the causes of bankruptcy are: if you blame low saving and irresponsible consumers, you're apt to think that bankruptcy will fall when it becomes harder to get a discharge. If you think bankruptcy is mostly the result of cruel economic forces--medical bills, predatory lenders, or what have you--then you'll expect them to go back up.

Since the number of bankruptcies jumped right before bankruptcy reform passed in 2005, it would be instructive to go back further to see the total picture, not just the slice that McArdle wants us to see. Click on image to enlarge. 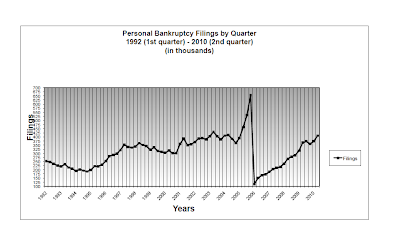 Unfortunately I don't have time to examine McArdle's evasions in detail. That will have to wait for my response to On Elizabeth Warren: The McArdle Post To End All Posts!!
Posted by Susan of Texas at 8:00 AM

Megan's graph is a second order number, i.e. if the rate of change is 0% that just means that the bankruptcy rate is the same as last year. Last year could be an unprecedented increase but you can't know that from her graph. What her graph does show is that bankruptcies in the US have been growing at very scary rates for the last 3 years, with the best statistic being that the rate has slowed a little bit (for the first time) only in the last 2 months (and that is really only relative to the last year which was +20% over the year before so this year is only really +10%).

Thanks for the help; I just don't have time to take her posts apart.

Does it ever occur to her that "Toxicroach" may be just as much a bankruptcy lawyer as I am a thoracic surgeon? Which is not at all? This is what she cites to support her argument?

Also too, it's so typical of her to use a graph showing a decline in the rate of increase (thanks, fish) to "prove" that there are fewer bankruptcies. But...

I can't decide--did she dishonestly use that chart because it had a falling line and "bankruptcy" in the title? Or was she just being stupid?

It's the eternal question.

Speaking as a fellow English Lit major (better school, but it's close) and MBA (worse school, not so close), all I would say about her choosing that graphic is that I would never let her do the analysis of what Optimal Production would be.

If she hadn't supposedly passed a business class or ten in her life, I would assume stupidity. If Chicago is half as good as it was in the early 1980s, it has to be dishonesty.

(If she were claiming to be an economist, it would be even worse; but for that we have Amity Shlaes.)

Mr. Houghton: you gave me a chuckle. Imagine if ArgleBargle were a Literature Major and wrote a column about ... Homer or Shakespeare! The stupidity and ignorance would be very amusing.

McMegan (whispering): I'm jonesing for a chart that makes the pain go away.

Feulner: Look at Fox. No one notices.

McMegan: But I'm trying to sedate people who can add.

Sorry, MeMac, this is a calculus thing...I'm afraid you and your little can't-do-billions calculator are out of your element.

Go play with your collection of salt shakers.