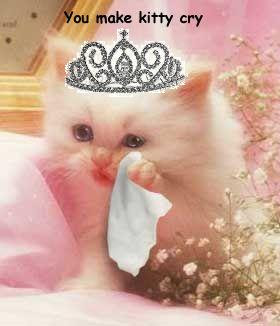 Obviously, yes, I was upset yesterday. I'm glad that this could bring so much joy to peoples' hearts, and of course to know that for many people, the happiest part of passing health care reform seems to have been knowing that it made people like me unhappy.

It's hard to be the center of the universe. Here you are, bright-eyed, bushy-tailed, and Big Thinkerish, but people keep doing things you don't like. What the hell is wrong with them? Don't they care about Megan McArdle at all? Do they even think about what she wants? Or do they just think of ways to make her unhappy, like trying to get health care or end wars? How freaking selfish can other people be??

The people wondering why I was so upset should contemplate that first, I think you people just screwed up both our health care system, and our fiscal system (even further), and that if I'm right, that's not really funny.

Awwww. Sad Kitty ignored the death of Iraqis (and actually tried with all her might to downplay their deaths) and the irresponsible actions of her banking gods, but now she's terrified. Little Miss Megan thought it was fine for our elite to plunge the world into an economic crises, but health care will mean the death of our nation, just like national health care brought down all these countries that have it: "Afghanistan, Argentina, Austria, Australia, Belgium, Brazil, Canada, Chile, China, Cuba, Costa Rica, Cyprus, Denmark, Finland, France, Germany, Greece, Iraq*, Iceland, Ireland, Israel, Italy, Japan, Luxembourg, the Netherlands, New Zealand, Oman, Portugal, Russia, Saudi Arabia, Spain, Sweden, South Korea, Sri Lanka, Ukraine and the United Kingdom."

McArdle has not really backed down from any of her lies and distortions about health care; she still repeats them in ever-shifting form. She simply dismisses the facts, saying that government is bad and it should stay out of health care.

I realize that to most people, these are airy-fairy considerations that should be overridden by the many "practical" considerations of the awesomeness of central health care. Well, I'm actually pretty underwhelmed by that awesomeness, for reasons I'll happily elaborate elsewhere. But not here, because fundamentally, to me, the effect on the tax code and the relative efficiency of various sorts of bureaucracy are mostly beside the point. The real issue is the effect on future lives, and future freedom. And in my opinion, they way in overwhelmingly on the side of stopping further government encroachments into health care provision.

Unfortunately for everyone who was paid to fight health care reform, the Republicans ruined the economy, lost the election, and lost the opportunity to watch more Americans die in the street or cheap apartments. McArdle only makes herself look hysterical, ill-informed, and hopelessly partisan by predicting the end of the world as we know it.

If you think there is actually no chance that I'm right, you need to go read a book like Jonah Leher's How We Decide.

You have to admire her belief in her mental powers. However, she forgets one tiny detail: 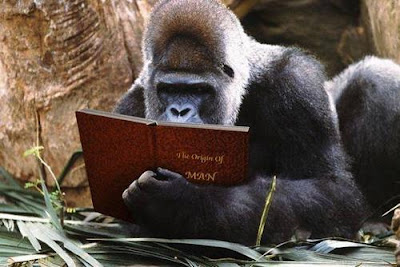 Wanda: Oh, right! To call you stupid would be an insult to stupid people! I've known sheep that could outwit you. I've worn dresses with higher IQs. But you think you're an intellectual, don't you, ape?

Wanda: Yes, they do, Otto. They just don't understand it. Now let me correct you on a couple of things, OK? Aristotle was not Belgian. The central message of Buddhism is not every man for himself. The London Underground is not a political movement. Those are all mistakes. I looked 'em up.


(My computer went haywire for a moment, so this post was edited after publishing.)
Posted by Susan of Texas at 11:09 AM

The only way that top picture could be more classic is if the kitten was wearing a tiara.

I'm computer illiterate but I managed to give Sad Kitty a tiara. Hee!

Oh, that is just hilarious!

Defination of
"Practical": of or concerned with the actual doing or use of something rather than with theory and ideas.

The happiest? Certainly not. Top five? Maybe. Top ten? Definitely. But that's only because I'm a, as Brad et al. so nicely put it, an obsessional critic.

Thanks for the image, I lolled. And now all I can think of is that song people have to sing to Sheldon Cooper when he's sick...

Oh and not to nitpick, but that map is weird and the list even weirder. For example, Hungary, Poland, Slovakia and the Czech Republic are on the map in blue (as they should be), but not on the list. And as for the Baltic countries, Lithuania has had a form of public insurance since 1996, Latvia since 1998 and Estonia since independence.

What about the poor Gorilla? Where is his tiara, or at least an iPod?

KWillow,
That's a prototype Kindle he's holding in that picture...

Funny how all these conservatives against government involvement in health care had no compunction about involving the Federal government in the Terri Schiavo case.

Keeping a person in a permanent vegetative state on life support was a national priority for them, but expanding health insurance coverage is somehow the worst day in the history of the country for them.

I guess I may never understand how people like McArdle can look at the health-care systems in any of the European countries, or Canada, or Japan, or you name it and not say "I want that." Or even come up with the obvious solution: "We're going to cut the Defense budget by 80 percent and redirect all of that money into infrastructure and social programs--like universal health care--so you won't even notice the change on your tax bill. In fact, it may actually go down."