Your Lovin' Don't Pay My Bills 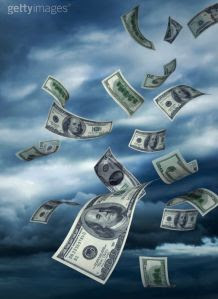 Megan McArdle is feeling the sting of public disapproval. Her commenters are pointing out that there is no excuse for defending tea baggers who are tormenting a sick man and McArdle simply can't figure out what all the fuss is about. After all, they were throwing money at the man. Money! How could anyone protest something as wonderful and special as money? What is human dignity compared to cold, hard cash?

No matter how frail his condition, could the fellow on the ground possibly have been seriously endangered by having two bills hurled his way?

I'd certainly be willing to take such harsh treatment from the nice folks at Progress Ohio.

McArdle can't even stand negative words on the internet, let alone someone screaming and throwing things at her. When her commenters point out that callous disregard for other human beings is a characteristic of sociopathy, McArdle rushes to defend herself.

The tendency of both sides in this debate to ratchet up the rhetoric until everyone who disagrees with you is a sociopath, and every protest is 1960's Birmingham, is getting ridiculous--and it demeans both actual people who suffered physical violence, and the intelligence of those around you. If you are that confident about your beliefs on this very complicated topic, then you cannot possibly be making a rational and informed decision.

Actually, this topic is very clear-cut, for once. Don't harass sick people. McArdle has to make it complicated to obfuscate the fact that she is supporting tea baggers once again. To do so, she has to make utterly moronic statements. Being confident might be an indication of lack of knowledge and logic for McArdle, but it is not for everyone. Beliefs becomes knowledge if the belief is true and justified by the facts. And it is not only possible but it is necessary to make choices in life because problems must be solved or they will get worse.

McArdle is a Libertarian because it enables her refuse to make a choice or a decision. She has so little confidence in her opinions (admittedly, for good reason) that she managed to find a political philosophy that let her endlessly give useless advice that will never be taken and for which she will never be held accountable.

Megan McArdle: You seem to be under the mistaken impression that I have a workable political program. I'm a libertarian. My political ideas are always unpopular.

She can look wise without actually having any wisdom and give advice knowing very well it will never be implemented. Since she doesn't expect any results or consequences, she can vomit out anything damn thing she wants, no matter how foolish, cruel, or ignorant. And when she is criticized, she can state that nobody knows anything ever, so her critics must be wrong.

McArdle didn't have to repost the video of the harassment and fluff the tea baggers. There's no upside to doing so in this case except to support and defend her friends. Why defend an indefensible act when you could have just ignored it? Doesn't the wide-spread criticism of her actions ever make her reconsider what she is doing?

Isn't it amazing how people who disagree with you never have any but the vilest reasons for their beliefs, and are always logically and factually incorrect to boot?

I guess not. Instead of addressing her mistakes of fact and logic, she sneers at her critics. Instead of trying to determine why people are saying she is callous, she dismisses the criticism with a few sarcastic words. McArdle to a commenter:

I find it interesting that *your* inability to imagine how anyone could possibly disagree with you about the utility or justice of a social program must mean that *I* have a problem with empathy.

Less sarcastically, "sociopath" is a social disorder, not a political one, and disagreeing with you about social policy is not a symptom. To put it gently, the belief that disagreeing with you might be a symptom of such a disorder suggests a few DSM-IV diagnoses of its own--Narcissistic Personality Disorder, and Borderline Personality would be where I'd start looking.

Except that oh, right, it's totally moronic to start diagnosing people I've never met over the internet, on the basis of statements I don't like, and without a degree in psychiatry.

If you disagree with her you are a narcissist, because you are sure you are right and nobody can ever be sure that they are right. Even the people who research the facts, logically work through the problem, and determine a course of action can't be confident enough in their intellectual capacity and hard work to actually make a decision. Decisions are too hard. Just as McArdle thought Saddam had WMD because she would have had WMD, McArdle thinks nobody can reason because she can't reason. And compassion is narcissism, for it is paternalistic to determine that someone is in need and should be helped.
Someone should have told God about Libertarianism. He could have skipped that whole Jesus thing and saved Himself the trouble of suffering and dying to save His children, who should have pulled themselves up by their sandal straps anyway.
Posted by Susan of Texas at 1:56 PM


Megan McArdle: You seem to be under the mistaken impression that I have a workable political program. I'm a libertarian. My political ideas are always unpopular.

She is really profoundly stupid. There's no connection between a "workable political program" and "popularity." A program could be workable, and unpopular, or popular and unworkable. Two obvious examples: "Kill all the jews"--workable but, at least to us Jews, unpopular. Or "give everyone pink unicorns and a high tea composed of spun silver cake"--that might be very popular, but ultimately a tad difficult to put through the ordinary legislative process.

That woman is so stupid she makes stupid hang its head in shame.

Less sarcastically, "sociopath" is a social disorder, not a political one, and disagreeing with you about social policy is not a symptom.

Most aren't even talking about politics in this case. They're calling her out for downplaying how vicious those people were to the counter-protester and claiming it wasn't a big deal because it's not like anybody got physically hurt. They're telling her she's a heartless so-and-so; there's no politics in that.

And sociopathy is not a "social disorder." It's a mental illness. Aimai's right. Stupid is too kind a word to describe this person.

Someone should have told God about Libertarianism. He could have skipped that whole Jesus thing and saved Himself the trouble of suffering and dying to save His children, who should have pulled themselves up by their sandal straps anyway.


Great analogy. Keep it up Susan !

In The Black Swan, Nassim Taleb writes about a Parkinson's patient who sues his doctor for gambling losses. One of the side effects of the treatment regimen for Parkinsons (L-dopa) can be that patients become compulsive gamblers.

"Aha! A lack of medical coverage for Parkinson's patients (like the man at the rally) is a de facto form of tort reform, which is the solution to everything currently wrong with healthcare."*

Apparently, in her Colbert interview, Matalin *did* confuse God with a libertarian. She actually confused Jesus "I will make you fishers of men" and "consider the lilies, they toil not, neither do they spin" with the old chinese proverb "Give a man a fish and he eats for a day/teach him to fish...."

Brilliant, Susan. If McArdle has any shame or self-awareness, she would never show her face in public again. Alas...

Meghan's masters told her to write something excusing, maybe even praising the despicable behavior of the regressed teabaggers; and she did so, and is now defending her defense of incredibly vile, uncivilized actions.

Does that make Meg vile? Yes, it does.

i seriously enjoy your own writing way, very attractive.
don't quit and also keep writing mainly because it just nicely to look through it,
excited to view way more of your own articles, enjoy your day ;)

If McArdle wants people to throw money at her while debasing her, there are a number of establishments in D.C. that are always hiring.