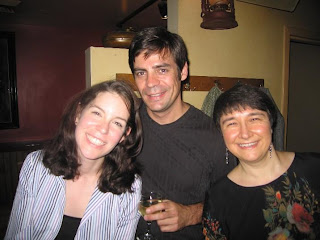 Fonzie, Joanie and a friend, be-bopping at the hop.

The kids at Al's Malt Shop are all riled up. It seems that someone is calling Fonzie and his little band of libertarian buddies a bunch of nerds while criticizing "Ayn" Rand Paul, and the gang leaps to their own defense.

Warren "Potsie" Weber says, "Will his opponents be able to saddle him with his radical libertarian position that private discrimination shouldn’t be the government’s business?" Potsie is just joking about the "radical" part. He believes that private discrimination is simply an unavoidable side effect of private liberty. His freedom depends on others' lack of freedom, so what is a Libertarian "nerd" to do but support prejudice? It's only fair. And libertarian.

Richie Cunningham is pissed as well. What about all the other people who have principles and fight for them? Are they nerds too?

As for the main argument here–that libertarians and their policy preferences are "out of touch with reality"–the same could be said, at minimum, of Glenn Greenwald's principled fight against ever-expanding executive power, and Salon's long-running critique of the War on Drugs. (Each of those categories of government abuse, by the way, are often defended precisely on grounds that "someone else really is looking out for your best interests by saying no.") When reality is unconscionable, and you are an opinion-journalism outfit with principles (or just a human with a functional spine), you tilt at the goddamned windmills, without first vetting it through a reality check.

If fighting for the right to deny people rights is wrong, then by golly libertarians don't want to be right! And fighting the encroaching police state and wasteful, racist War On Drugs is exactly like fighting for the right to be bigots. The gang at Salon might disagree, but they don't understand that being a libertarian means never having to say you're sorry answer for the consequences of your actions. As Joanie Cunningham says:

You seem to be under the mistaken impression that I have a workable political program. I'm a libertarian. My political ideas are always unpopular.

Fonzie and the gang don't care about popularity, they care about principle. And if others have to suffer for their principles, that's just the price other people will have to pay.
Posted by Susan of Texas at 8:30 AM

The libertards and the conservatards share so many traits; one basic belief that "there aren't enough Rights to go around". God only made so many, and no more. So if *You* have rights, it diminishes mine.

Well, that makes sense, KWillow, if the principle right you are concerned with is the right to be an asshole.

And McArdle is the most principled person around!