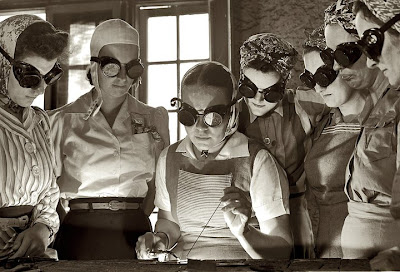 I used to be busy with work!

About the only good thing I can say about it is that I know far more about the housing bubble and subsequent meltdown than all the McArdles and Bobos out there.
~

Paychecks? People get paid to work? Strange. I should try that some time.

Most have forgotten that in the early 20th century the American kitchen, with its advanced manufacturing and mixing tools, was a hotplate of research into physics and chemistry. As illustrated in the photo, R&D teams at KitchenAid and Sunbeam, among many others, provided insights as well as seasoned researchers that proved essential to maintaining the Allies' lead in nuclear appliances during, and after, WW II.

It's tragic that the protective gear was so inadequate, and treatments for cancer so ineffective, that few survived, and doubly so that this led to such overregulation of home nuclear power that hardly anyone these days with a net worth less than Nathan Myhrvold's has a cyclotron or breeder reactor.