The Quick (Fingered) and the (Brain) Dead

A video of a speech on inequality is making the rounds, and Megan McArdle sniffs her disapproval. 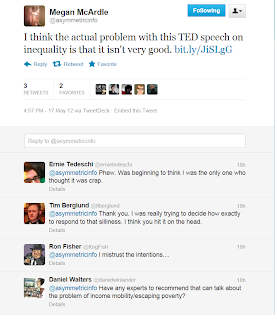 McArdle goes on to recommend the Brookings Institute's view, which says that income inequality is high but doesn't matter because it doesn't hurt the middle class. They say that if liberals want to say it does they have to prove it. Of course that has already been done, but we all know that nobody can trust those liberal facts, which often have shady motivations for being liberal. And factual.

Just as the Brookings Institute ignores unemployment, McArdle ignores the fact that the economy depends on consumer demand, not inequality. Giving all the money to the rich doesn't create jobs, as the speaker in the video says. It just makes the rich richer. The rich are not going to build factories to make things that nobody can afford to buy; they will hire more workers only when they need them.

Of course conservatives think they are winning Twitter. Why go through all that analysis and math and thinking when you can just say something "isn't very good" and your followers will agree with you immediately?

ADDED: The Thinker adds his two cents.
Posted by Susan of Texas at 12:09 PM

Can we have someone read like..10 pages of her book and declare it awful like she did to Sex at Dawn?

That Brookings link is utter Krap.

A bunch of stupid towers then a Nevermind - without any analysis or numbers in between.

I love how the first two responses to her twit are people thanking McArdle for telling them what to think.

It's a dirty job but somebody has to do it.

You have to admit, Susan, it would save you considerable time if you could just tweet, "The problem with the latest McArdle article is that it just isn't very good" every time she posts something.

Now I understand how she has so much time for bad cooking and fugly kitchen renos. It must be an example of that efficiency they're teaching at the business school.

How shocking that a plutocrat who actively lies about income inequality wouldn't like the the talk. She must view Hanauer as a class traitor, and thus she uses a classic McArdle-Goldberg move: try to minimize him first to avoid having to engage in a more substantial way and get exposed.

She'll get back to us right after she opens the door for the FedEx guy.

I thought, in my simplicity, that you were quoting a Megan column, in which she goes on to explain why "it isn't very good." I need reading comp help--you said Twitter and, by God, Twitter it is. THAT's her response?

Well. As at Passover, the Simple Son asks: WTF?

I can't wait until her book comes out. I'll throw a book party for her, like the Vatican did for Galileo.

Speaking of the Twitter Wars, these two tweets were posted an hour ago on Twitter by http://2012twit.com/:

If this is what Assrocket calls 'winning' the Twitter war, I'd hate to see what he thinks losing it looks like. :-)

I just hope that her book advance was enough for her to renovate her BATHROOM.

zombie rotten mcdonald: So we can be subjected to another post about how to remodel another room in her house on the cheap? Wasn't the kitchen remodel torture enough?

if by torture, you mean HILARIOUS, the yes.

And do you think it was more painful than when she writes about economics? Or, really, anything else?

I am also looking forward to if/when she spawns, so Tbogg can resurrect the America's Worst Mother columns.