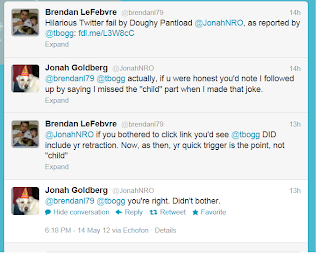 He chooses to ignore any information he does not like and he chooses gloating, goading, or insulting instead of thinking. He is stupid by choice and nothing will change that.

The only option is to tease him until he cries and runs home to his mommy.
Posted by Susan of Texas at 10:48 AM

Goldberg is perfectly suited to Twitter. He can exchange quips with his friends and nobody expects him to take any time or thought when writing.

The Time cover did nothing for him because it reminded him of his relationship with Lucianne. (There's your GERD moment of the day...)

Remember: conservatives are kicking let-wing butt on Twitter! The Ole Perfesser said so!

Loadpants has been convinced that he is a rare intellect, a person of profound observational powers, his genius so far above "liberals" that they can't comprehend it: they can only point and laugh.

Doughboy is more fun than McArdle's Substitute Legionnaires, but I figured that somebody needed to keep tabs on them - http://downpuppy.blogspot.com/2012/05/james-russell-lowell-memorial-circle.html

Sometimes the question has to be asked. Is our jonahs learning? Signs point to no.

So liberals use short unthinking slogans to cheat in the marketplace of ideas, while conservatives excel at the clever forwarding of Twitters? OK.

Jonah's on the wrong side of twittery.

I dunno. I think Jonah excels at being a twit.

All I can think of when I see a Jonah tweet is: that poor dog. What did he do in a past life to deserve this. Maybe he was David Broder.

But just think of all the food crumbs that Jonah drops. It must be like manna from heaven, all the time.