Much, much, much shorter Megan McArdle: "Obamacare Needs A Drop Dead Date"--The poor rollout of "Obamacare" is just the beginning of its "death spiral" and we should delay it for a year.

In response I will quote Jon Schwarz (via Digby) who wrote an article on his experience with cancer and "Obamacare":


So you can understand why I've been closely following the GOP's attempts to defund Obamacare. I'm suddenly much more interested in everything about healthcare policy, in the same way you're suddenly much more interested in the safety instructions in the seat back in front of you when the pilot announces you're ditching in Lake Superior. And every time Ted Cruz has gone on TV, what I've heard him say is: "I very much want to kill you, Jon Schwarz."

That's because Obamacare requires insurance companies for the first time to cover everyone, regardless of any preexisting conditions. There's no more disqualifying condition than cancer; without Obamacare, I would now almost certainly be uninsurable if someday in the future I try to get insurance on the individual market. And we know what happens to people without health insurance in the United States: they die.

This doesn't mean that I don't understand Obamacare's grievous flaws. But they're not flaws of going too far, they're flaws of not going nearly far enough. Almost every day now I think about the tens of thousands of Americans walking around with undiagnosed, early melanomas who could be cured in ten minutes. Some of them think something might be wrong but aren't doing anything because they have no insurance or bad insurance. Is it you, 28-year-old woman in jeggings who's clearly spent too much time at a tanning salon? Or maybe it's you, middle-aged dad I saw carting around three kids at the grocery store while getting instructions on your cell phone on what brand of spaghetti to buy. Or you, the 60-year-old cashier at the Indian restaurant who gave me the extra order that someone else never picked up. These thoughts about this unnecessary suffering torment me. If that sounds overwrought to you, I'm guessing you've never looked at a pathology report with your name on it that says "diagnosis: malignant."

And the awful truth is that while Obamacare will save some of those people, it won't save them all – because although it will help nearly everyone get some kind of insurance, it won't help everyone get good insurance, the kind that saved me. Some of them will look at their strange asymmetric mole and their $2000 deductible and won't be $2100 worth of worried until it's too late. [snip] I didn't have to pay anything to see a doctor, and because of that it cost the healthcare system about $5,000 to treat me. If I'd delayed because I had to pay, it easily could have ended up costing the system $500,000 worth of interferon, CT scans and radioimmunotherapy, plus the additional downside of me being dead. Multiply that by millions of people and you'll understand why the right's crusade against health insurance is more than just evil and cruel, it's evil, cruel and incredibly stupid.

So we don't have to just beat Ted Cruz so hard he flees back to Alberta. We have to get rid of the parts of Obamacare that may help the private insurance industry keep squeezing us like an anaconda. And we have to keep and improve the good parts, so the Affordable Care Act is just the first step to the only system that's ever worked anywhere on earth: universal, high-quality health insurance and healthcare for everyone. And while we're working on this, seriously – please please use lots of sunscreen and don't skimp on dermatologist appointments.

Read it all, as they say.

McArdle wants "Obamacare" to have a drop-dead date. If some people drop dead in the process, well, that's just the price they'll have to pay for Freedom.

ADDED: There could be no greater praise than to be burped up retweeted by Jonah! 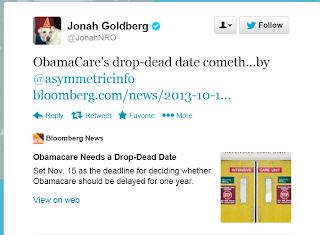 If the Lord loved you, he wouldn't give you cancer...

Nice to see you!

Indeed. And it's better for people to die right now that later, after Obamacare/Social Security/Medicare/the government's inevitable demise.

rather than later, that is.