Megan McArdle, when she wants DC to stop regulating her car service and food trucks:

Because the disputes are hard to understand, the reaction to regulations at the federal level tends to line up on purely tribal affiliation: if you're a conservative, you assume that any new EPA regulation is a disaster, and if you're a liberal, you assume that it must be pretty swell. Among wonky liberals like Matt, I think there's the mirror tendency to assume that because the economy is not obviously being driven into the toilet by this stuff, the federal government must be doing a pretty okay job.

But this may just be the broken window fallacy in action: we see the distortions of the local government, but the distortions of the federal government remain invisible precisely because they're so effective at destroying innovation. The more national the rules, the harder it is to tell whether they're bad. The economy would not be destroyed if we had federal laws against Uber and food trucks; we'd all just be a little worse off.

The problem is, if the rules were national, none of us would even know that we were worse off. No one would ever have tried to start a food truck, so Matt and I wouldn't even know that there was this great thing we were missing. We may be assuming that the Federal rules work pretty well precisely because they have entirely foreclosed a bunch of great possibilities that we'd really enjoy.

Megan McArdle, when insufficient regulation might let the Chinese poison her dog: 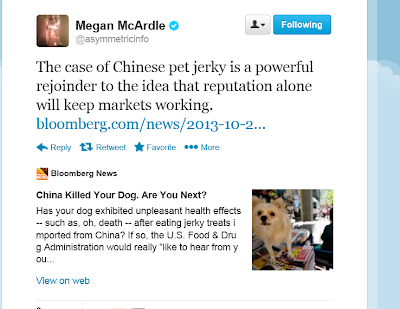 So now she tells us that market equilibrium doesn't work. I thought we didn't need regulation because the market was self-correcting.

So what if her dog dies or sick people die? Freedom ain't free.

The personal is political.

Note: Do not feed salt to dogs.

Wait until Megan has to sit up all night nursing herself and Suderman after they eat some bad oysters from a restaurant hampered by over-regulation of food safety requirements.

And I've obtained both business licenses and liquor licenses. Neither is difficult outside of paperwork and a couple of meetings and inspections (fire exits, structural compliance, sanitation facilities, clean kitchens and bars so that people don't get sick/hurt/killed. Damn those fascists getting in the way of free enterprise!)

Because the disputes are hard to understand

This is when you need someone to Meegan-splain it.
~

Susan, I rejoice to see you back in the game! No time to say more.

Well, nobody can know anything ever, right?

And everything's too hard.

I assume that's a reference to Yglesias, which means there are at least three errors in four words. (His first name is correct.)

When do we get a review of The Book?

I think I will buy it when it comes out in February. I like to think that a very small part of her next $1500 kitchen appliance has my name on it, like a dedication brick in a sidewalk.

Regarding the subsidization of Chef McArdle (and I love the notion of her patrons names being microscopically engraved on her expensive kitchen appliances), I wonder how many people actually use her recipes? Just reading them gives me constipation and imagining Megan in the kitchen makes my head hurt.

Why imagine her in the kitchen when you can watch?