How To Make Pie Crust

Let's make a pie crust. Please forgive the bad lighting and focus; the lighting is poor in my kitchen and this is my first attempt to upload phone photos. 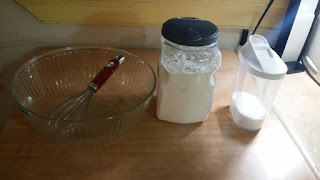 First I stirred the flour with a fork to loosen it up. I measured out two level cups and whisked in one teaspoon salt. 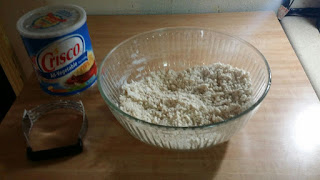 I cut in 2/3 cup of Crisco. I used the same pastry cutter that I've been using for my entire adult life. They cost about $10 and last forever. Mine is missing one tine but works just fine. I timed it and it takes one minute and ten seconds to cut in the fat until it is the size of crumbs.

Next you add about 4-8 tablespoons of ice water and stir.  I've found it's better to add a little too much than not enough. The flour will absorb the water. Since I was photographing the crust I erred on the side of caution and added only 1/4 cup which is what the recipe called for. It wasn't quite enough and the crust was a little too crumbly but it still worked out okay. I stirred just until combined and quickly form the dough into a ball with my hands and flattened it slightly to make it cool faster. 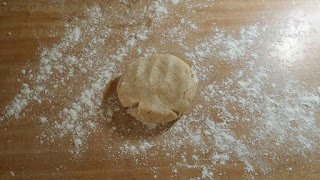 I wrapped the crust in plastic wrap and let it rest in the refrigerator for an hour. You should let it rest for at least half an hour but no longer than overnight. I took the dough out of the refrigerator, cut it in half, and formed it into two balls. I flattened the balls to make them easier to roll and put one back in the refrigerator. Then I was ready to roll out the bottom crust. Notice that there is flour on the board. It will not ruin the crust and it will keep it from sticking.

I dusted the silicone rolling pin and rolled the dough gently up and down for a second or two. I turned the crust and rolled it again. Then I started in the middle and rolled outward all around the dough, enlarging the circle. I added a dusting of flour as necessary; as the circle gets bigger it will get stickier.

Notice that it's not a perfect circle and that there are some breaks. If it tears I wet the crust a little and stick the two parts back together and dust it with flour.  If it sticks to the board I loosen it with a spatula and dust the board with flour. It takes practice to roll out the dough so it is of an even thickness and (rough) circle but once you get the hang of it, it's easy. 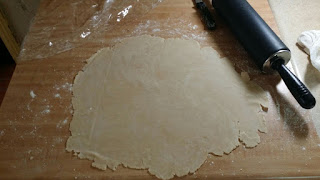 I fold over the crust twice and unfold it into the pan or drape the crust over the rolling pin. Whatever works. I then rolled the second crust, put in the filling I had prepared while the dough rested (it was a chicken pot pie) and covered it. Note that there are many imperfections; that's okay. It'll be fine. 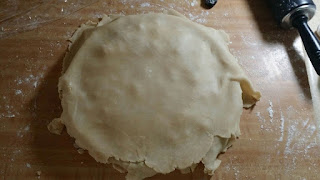 I trimmed off the excess crust but left plenty of crust for the next step. I tucked and rolled the upper crust over the lower crust and then crimped it between fingers and thumbs in a kind of pinching motion I picked up from watching my mother. 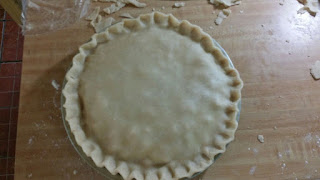 Because it is a savory pie I mixed one egg yolk with a teaspoon of water and used a pastry brush to cover the pie with the egg wash.  Pie crust does not brown very much. I then cut three smallish slits in the upper crust to let out steam. If it were a fruit pie I would brush it with milk and sprinkle it with a cinnamon-sugar mix. I baked it until it was bubbling and browned. McArdle is right that you should bake it for about 10 minutes at a higher temperature and then lower it to 350 degrees but my gas oven is about 65 years old and the regulator doesn't work very well so I just baked it at 350 the entire time. 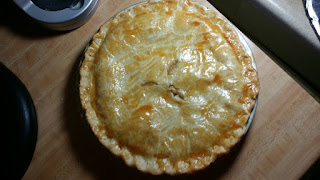 How'd you do this without a Thermomix?

I know! It takes thousands of dollars to be unable to make piecrust.

The first time I had sweet potato pie was last November in Berlin made by a friend of mine who's from Texas. He used a fork to cut the fat in and an empty pickle jar to roll it out and it was damn near perfect. Mine usually suck, but it's because I always use either whole wheat or spelt flour.

Heh. It's not that hard.

Where I come from, pumpkin is roasted with salt and pepper and served with meat. Sweet pumpkin anything is just weird...

It does take practice and the type of flour is important. For a while my crusts crumbled (not enough water) or stuck to the board (too much water). I rolled lumpy crusts until I learned to flatten the dough before rolling and roll from the center outward. It's very hot here and I learned to use ice water, keep the shortening in the refrigerator, and work fast. And I still failed. But after a while I got the hang of it and was able to make a good crust every time.

I spent years making bad and mediocre pizzas before I was able to make a decent one. I had to attack each problem one by one, reading many recipes before I learned to use bottled water, rest the dough overnight, buy a better brand of mozzarella, use less herbs. And they were still crummy pizzas until we replaced our electric oven with a Chambers gas stove and I learned to let the oven heat up for an hour. Then I had to learn to cook pizza in the pan for 11 minutes, take it out and cook for 2-3 minutes more on the pizza stone I keep on the bottom of the oven. Then I had to learn to let it cool slightly on a wire rack. I never would have spent years experimenting if it were not for the fact that we couldn't afford to go out for pizza whenever we wanted one. And after all that our local grocery store started selling fresh pizza dough so now I use that instead.

And I also spent an embarrassingly long time before I made a decent frosting, which is easy--I never beat it long enough.

We Americans put sugar in everything don't we? I heard that goes back to Prohibition, when we substituted sugary drinks for alcohol, but who knows if that's true.

Turns out the flour does make all the difference: http://www.bulbul.sk/pie/.
Whole wheat flour works beautifully in pate sucree (tarts), spelt flour is brilliant for cheesecake bases (I just can't bring myself to use biscuits/crackers, it's cheating) and brownies.
In our parts, we make a lot of stuff that is similar to pizza, so the transition (pizza has only been a thing here for the last 20 years or so) was near seamless, plus my mother has always made everything from scratch, so that one I learned early together with other things. But pie crust is still a challenge.
We Americans put sugar in everything don't we?
And insane amounts, too. Take Martha Stewart's brownies: 1 1/4 cup of sugar which translates to a quarter of a kilo for an 8 inch brownie pan?