Jonah "I'm rubber and you're glue" Goldberg has penned another masterpiece of projection and irony. The man makes a living out of whining that he's called a fascist, yet writes this: 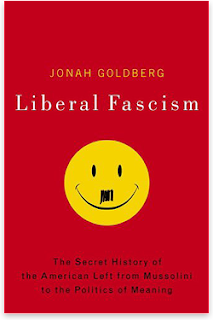 A book in which he calls liberals fascists. And now he writes this:

I think the desire to cast the Israelis as Nazis is fueled, deep down, by the haters’ need to see their own hatreds and ambitions mirrored in their enemy’s actions. Hamas has an avowedly Hitlerite agenda. The only way to make such an agenda defensible is to convince yourself and others that the Israelis deserve it. Hence, Hamas and its allies insist that when they aim rockets at grade schools and playgrounds, they are resisting the “new Nazis.” It brings to mind Huey Long’s reported prophecy that if fascism ever came to America, it would be called anti-fascism. Well, with Hamas, Hitlerism comes to the Middle East wearing the mask of anti-Hitlerism.

What can one say in the face of such obdurate obliviousness and determined stupidity? Calling people Nazis is bad and oh by the way liberals are fascists and Hamas are Nazis. Liberals and Hamas are projecting by saying conservatives are projecting. No doubt little Jonah Goldberg, big and heavy for his age and with the instincts cultivated by his mother, professional ratfucker Lucianne Goldberg, spent his entire childhood accusing other children of hating him because of his principles, not because he ratted to the teacher and bullied them on the playground.
Posted by Susan of Texas at 12:34 PM