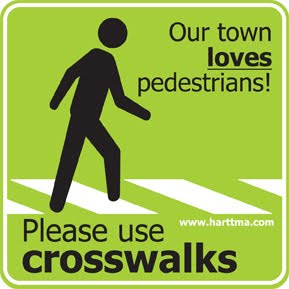 Department of Awful Statistics
Business Jan 20 2011, 11:35 AM ET 37
What to say about a statement by the Governor's Highway Safety Association spokesman which seems to blame--I swear, I am not making this up--Michelle Obama's national fitness campaign for an uptick in pedestrian deaths?

In order to make this sort of statement, I'd want some pretty ironclad evidence that, first of all, Michelle Obama's exhortations were actually causing people to spend more time walking on our nation's roads--a premise that this libertarian, for one, is pretty skeptical of.

I'd also want to see some evidence that they were walking on roads where, y'know, more people were dying.

I presume that the spokesman had some sort of temporary freakout during the radio interview and blurted something he didn't quite mean. It happens even to seasoned pros. But c'mon, guys, where's the mumbling, red-faced, excruciatingly apologetic retraction?

I am the spokesman for the Governors Highway Safety Association. In the interview you reference, I did not blame Mrs. Obama for the small uptick in pedestrian deaths. I noted that in our study we note that programs such as Mrs. Obama's may be increasing the number and frequency of pedestrians and thus exposing them to more risk. We support these programs but want to make sure that pedestrians are behaving safely-not using iphones, texting, crossing in dangerous places, etc. It's ludicrous to suggest that the non-partisan, nonprofit Governors Highway Safety Association is blaming Mrs. Obama. We encourage walking/jogging, etc. We just want to make sure that this doesn't lead to more needless deaths.

If McArdle really wanted the data she could have just gone to the website, where a link to it is provided on the first page. And since the purpose of the GHSA's correction was to point out that they were merely warning that a "growing national focus on walkable communities and “get moving” health and fitness efforts may cause pedestrian exposure, and thus risk, to increase," it's not clear what else GHSA should provide to satisfy McArdle.

McArdle got her misleading information from James Joyner, who got it from the web site of a right-wing radio station. Perhaps that did not tweak McArdle's finely honed journalistic instincts since she has taken to frequently linking to other grossly ideological sites such as Cato and her husband at Reason, and therefore sees nothing wrong with a report that states an association of state highway safety offices blames the First Lady for traffic deaths.

Again, why does she pretend to be an impartial journalist? Her pretense certainly doesn't fool anyone and it's not even necessary anymore.

*"Looking at the early data from 2010, GHSA’s report notes that 28 states experienced a pedestrian fatality decline, while 18 saw an increase and five were unchanged. (For purposes of this report, Washington D.C. is considered a state). Significantly, eight states had an increase of at least ten deaths. Interestingly, one might expect the increases to be in the large states with big cities and lots of pedestrians such as in California, New York and Texas. However, these three big states experienced reductions in pedestrian fatalities. States with increases include: Arizona (up 21), Florida (up 36), Oklahoma (up 16) Oregon (up 18), and North Carolina (up 17).

Troy E. Costales, GHSA’s Vice Chairman and head of Oregon’s highway safety program, notes that the big increase in his state comes after 60-year lows in 2009. Costales adds, “It is definitely a concern. Looking at our data, we are seeing pedestrians crossing mid-block instead of at crosswalks, pedestrians walking in the roadway, and even some walking in the travel lanes of the interstate. We are familiar with aggressive drivers; we now have aggressive pedestrians.” Costales also notes that more than half of the pedestrians killed in 2010 were under the influence of intoxicants."

Evidently drunk people who walk in traffic are being killed in increasing numbers. Who could have guessed?


Thrilling Update! Derek Thompson at The Atlantic looks into the Mystery of the Misquoted Spokesperson.

When Barbara Harsha, executive director of the Governors Highway Safety Association, reportedly told the Washington Examiner that she was concerned the First Lady's nutrition campaign would result in more pedestrian casualties, it caused something of an uproar online. So I called the GHSA office for clarification and got Harsha on the phone.

Too bad McArdle didn't do a little actual reporting. But that's why she's our very favorite conservative blogger--evidently it never even occurred to this "journalist" to pick up the phone.
Posted by Susan of Texas at 2:02 PM

Objective? You aim too high, Susan. At this point, I'd settle for Megan to simply be a competent journalist.

You probably don't want to be defending the Maryland GHSA's statement, which was pretty short-sighted and car-centric in laying the blame on pedestrians and ignoring any recommendations that roads could be made safer for them.

Hey, Megan's right when she says she's not making it up. Tucker Carlson is making it up, so there's not reason to apologize.

Digamma, I'm not defending Maryland's statement, which I haven't seen until now. I'm mocking McArdle for not checking the sources of her information.

ArgleBargle is a -really sloppy and dumb- stenographer, not a journalist.

Yeah, sure, that's the issue. That'll distract the rabble! It's funny because the dodge is so weak, it posits that McMegan gives a damn about data, it posits that such data is particularly important, and it ignores the glaring issue, that Tucker Carlson lied and she got suckered into it. She won't call him out, and she won't apologize. Maybe they should coordinate their bullshit better next time.