Megan McArdle is most concerned about the well-being of the rich.

The Rich Really Are Different: Their Incomes Fluctuate More
Robert Frank points out that a lot of the reason states are in so much trouble is that many have become incredibly dependent on high earners for their tax revenues: [snipped quote] This is one of the reasons that we can't fix all our budget problems with higher taxes on the rich--if we do that, revenues are going to collapse dangerously every time there's a recession.

Somehow I doubt the rich are losing sleep about fluctuating income. 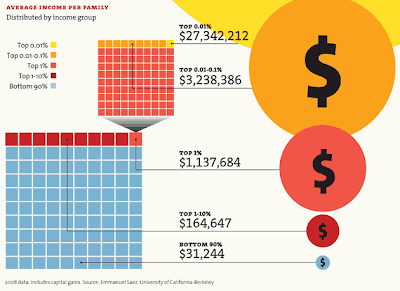 I see it but I can hardly believe it. Where is her dignity, her pride? Her subservience to power, her groveling before money--it's just unreal. I've said that McArdle is like Mrs. Elton in her pretentiousness, but she is like Mr. Collins in her eagerness to praise the rich and ingratiate herself with them by carefully composing flattering and exculpatory odes of praise.


DURING dinner, Mr. Bennet scarcely spoke at all; but when the servants were withdrawn, he thought it time to have some conversation with his guest, and therefore started a subject in which he expected him to shine, by observing that he seemed very fortunate in his patroness. Lady Catherine de Bourgh's attention to his wishes, and consideration for his comfort, appeared very remarkable. Mr. Bennet could not have chosen better. Mr. Collins was eloquent in her praise. The subject elevated him to more than usual solemnity of manner, and with a most important aspect he protested that he had never in his life witnessed such behaviour in a person of rank -- such affability and condescension, as he had himself experienced from Lady Catherine. She had been graciously pleased to approve of both the discourses which he had already had the honour of preaching before her. She had also asked him twice to dine at Rosings, and had sent for him only the Saturday before, to make up her pool of quadrille in the evening. Lady Catherine was reckoned proud by many people he knew, but he had never seen any thing but affability in her. She had always spoken to him as she would to any other gentleman; she made not the smallest objection to his joining in the society of the neighbourhood, nor to his leaving his parish occasionally for a week or two, to visit his relations. She had even condescended to advise him to marry as soon as he could, provided he chose with discretion; and had once paid him a visit in his humble parsonage; where she had perfectly approved all the alterations he had been making, and had even vouchsafed to suggest some herself, -- some shelves in the closets up stairs.
``That is all very proper and civil I am sure,'' said Mrs. Bennet, ``and I dare say she is a very agreeable woman. It is a pity that great ladies in general are not more like her. Does she live near you, sir?''

``The garden in which stands my humble abode is separated only by a lane from Rosings Park, her ladyship's residence.''

``She has one only daughter, the heiress of Rosings, and of very extensive property.''

``Ah!'' cried Mrs. Bennet, shaking her head, ``then she is better off than many girls. And what sort of young lady is she? is she handsome?''

``She is a most charming young lady indeed. Lady Catherine herself says that in point of true beauty, Miss De Bourgh is far superior to the handsomest of her sex; because there is that in her features which marks the young woman of distinguished birth. She is unfortunately of a sickly constitution, which has prevented her making that progress in many accomplishments which she could not otherwise have failed of; as I am informed by the lady who superintended her education, and who still resides with them. But she is perfectly amiable, and often condescends to drive by my humble abode in her little phaeton and ponies.''

``Has she been presented? I do not remember her name among the ladies at court.''

``Her indifferent state of health unhappily prevents her being in town; and by that means, as I told Lady Catherine myself one day, has deprived the British court of its brightest ornament. Her ladyship seemed pleased with the idea, and you may imagine that I am happy on every occasion to offer those little delicate compliments which are always acceptable to ladies. I have more than once observed to Lady Catherine that her charming daughter seemed born to be a duchess, and that the most elevated rank, instead of giving her consequence, would be adorned by her. -- These are the kind of little things which please her ladyship, and it is a sort of attention which I conceive myself peculiarly bound to pay.''

``You judge very properly,'' said Mr. Bennet, ``and it is happy for you that you possess the talent of flattering with delicacy. May I ask whether these pleasing attentions proceed from the impulse of the moment, or are the result of previous study?''

``They arise chiefly from what is passing at the time, and though I sometimes amuse myself with suggesting and arranging such little elegant compliments as may be adapted to ordinary occasions, I always wish to give them as unstudied an air as possible.''

Mr. Bennet's expectations were fully answered. His cousin was as absurd as he had hoped, and he listened to him with the keenest enjoyment, maintaining at the same time the most resolute composure of countenance, and, except in an occasional glance at Elizabeth, requiring no partner in his pleasure.

By tea-time, however, the dose had been enough, and Mr. Bennet was glad to take his guest into the drawing-room again, and when tea was over, glad to invite him to read aloud to the ladies.

The rich are different, alright. They have Megan McArdle's lips firmly planted on their metaphorical asses.

Koch is pretty open about their connection with institutions like IHS, but from what I know of them, astroturfing doesn't really seem like their style. I've seen Koch in action at private events, and though I'll respect the privacy, I'll say that even in the company of other like-minded rich people, he displayed rather a mania for honest dealing. That's not to say that it's impossible that they do fund FreedomWorks--I'm not particularly conversant with the world of 501(c)(3) funders. But Freedomworks doesn't publish its donor list, and there's no source offered for the claim.

McArdle doesn't have the eloquence of Mr. Collins but she made up for it in volume.
Posted by Susan of Texas at 9:10 AM

This is one of the reasons that we can't fix all our budget problems with higher taxes on the rich--if we do that, revenues are going to collapse dangerously every time there's a recession.

McArdle would not want to get rid of all the poor. There must be some around to envy and admire her or it's no fun.

Reminds me of Dan Ackroyd's character Roman Craig, in The Great Outdoors:

(I haven't read Jane Austen's books, so the best I can come up with is a line from a John Hughes movie.)

Nobody with a mania for honesty ends up as rich as those pricks.

The overweening mass of stupid comments there prevented me from even making the obvious points that (1)there's nothing wrong with higher receipts in good years (2) the obvious answer is a wider distribution of income & (3)people with wealth aren't living from paycheck to paycheck.

If taxes are raised on the rich in Manhattan, the rich will relocate to the more favourable tax position of Wisconsin.

You may also have noticed that Megan has taken with much greater frequency as of late to banning those who disagree with her and their comments.

Megan learned this trick, sources say, from Ta-Nehisi Coates, who is known at The Atlantic for being quite the diva.

That is very interesting.

It's inevitable that Coates would have to clean up the comments since The Atlantic seems to have developed a large following from the racist neo-con middle class. Coates is very much like Sullivan, which is of course not a coincidence; the Atlantic hired walking human contradictions to purchase as many liberal credentials as possible. A woman who is happy to be subservient to power, a black man who thinks he's part of the elite and looks down on the lower classes (in the nicest possible way), a gay man who worships conservatism, a Harvard fundamentalist.

Coates has to read all those racist messages and then he must cover up their crimes, remove all evidence of the kind of people he works for and writes for. He has to erase the evidence of their racism and his own history, a horrible thing for a black man to have to do because it was done to people like him for centuries.

But perhaps I have sympathy where none is merited; maybe he doesn't care in the slightest or even see anything shameful or unpleasant in what he is doing. Maybe he is merely interested in black history and isn't trying to find a safe way to deal with the racism in his life by examining black people's past experiences of racism while white-washing his own.

Some day, maybe soon, Coates will move on to another publisher and no doubt will become a respected thinker and pundit, the go-to guy for the fake liberal media when they need a non-threatening man to explain to the masses that no, it's not a bad thing for the black middle class to be pushed out of DC because they can just move to a suburb, so the rich white people don't have to commute.

Thoughtful comments on TNC, thanks Susan.

Go halfway with you on your analysis.
Coates has taken down the Neocon's rants for world domination through Avigdor Lieberman.
However, Coates has also censored the reasonable, rational, logical criticisms of his analysis and sophistry. In particular, it seems that anyone who dares to questions Coates's penchant for commenting about professional sports has been wiped from The Atlantic's database.
Megan, not always the fastest of learners, has merely adopted Coates's tactics and targeted the comments of those who dare to disagree with her in a balanced manner or, worse yet, choose to criticized her vaunted idol, Ayn Rand.

Also, it's no secret that Coates has lobbied fiercely, both publicly and privately, for the Thomas Sowell Seat at the Conservative Table when Mr. Sowell ventures forward to the Great Offshore Bank Account (not necessarily located in the sky).

I thought this post was embarrassing..and then I read her entirely wrongheaded GE tax post. Even her commenters are embarrassed for her. And her update ("Developing...") is the closest we'll ever see to a correction.

I'm working on a response to that post. I'm still at the point-and-laugh stage, however.

I've Googled around a number of times over the years to try to determine various wealthy people's incomes for blog posts, and, yes, frequently you'll see that a particular billionaire had a net worth of $1.8 billion last year but dropped this year on the Forbes 400 because his net worth plummeted to -- if you have tears, prepare to shed them now -- a mere $1.2 billion.

So, yeah, she's right. These people experience real fluctuations. Fluctuations like that.