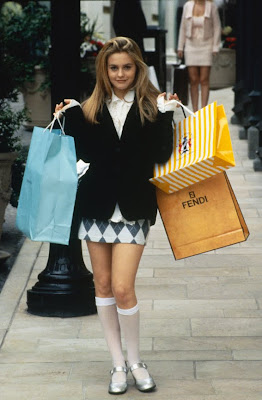 Oh no, Megan McArdle! Are the protesters interfering with your shopping?

Our Shop 'Til You Drop Princess is driven to pout by all the careless, clueless protesters who don't even care that they are inconveniencing her, or, worse yet, costing her money!

The head of DC's Fraternal Order of Police sent a rather blistering open letter to Mayor Vincent Gray, chastising him for not admitting that the Occupy DC protests are causing a rise in crime, as neighborhood policing resources are pulled away in order to police the protests.

One needs to take this with a grain of salt--gentrification is creating a lot more opportunities for muggings and property crimes, which may have something to do with the spike he identifies. And he's clearly got other issues with the Mayor over budget cuts and the rate of new hires.

He does indeed. Mr. Baumann seems very upset with the mayor because 400 policemen were fired. We cannot, however, understand why Miss Megan is suddenly on the side of a union representative, since unions, as we all know, only want to preserve jobs for incompetent workers who don't want to actually work.

Nonetheless, it's a plausible case. And it highlights an inherent tension that Julian Sanchez wrote about well in November: these protests are not simply about the protesters v. "the 1%". The protesters also impose costs, possibly significant costs, on the surrounding communities. And the protesters themselves seem to refuse to acknowledge this--that they are not simply a representative of "the 99%", but also often at odds with a significant portion of that larger population.

McArdle will never acknowledge the need to protest or the legitimacy of the protesters' complaints. She does not care about income inequality at all, supports bankers at all costs, and giggled at her idea of hitting protesters in the head with a 2x4 before they did any damage. God only knows what she thinks should be done to protesters who might possibly cost her money--probably evisceration.


Now, I'm sure that the members of OccupyDC would contest the need for extra policing.

Especially since the police were guarding the 1%, not the 99%, from the protesters.

But the active protests certainly do--sometime before Thanksgiving, I spent about twenty minutes trapped behind a handful of people who had decided to march down K Street at rush hour. They absolutely did need the large police escort that they had in order to keep angry drivers (not me) from running them over.

A handful of people delayed her trip home! Off with their heads! Or perhaps the heads of the "large police escort," who seemed to be the ones actually blocking most of the traffic.

And even the passive part of the protest had, last time I was down there, become a magnet for homeless people, with the attendant worries about petty crime and acting out by the mentally ill.

It does not occur to Princess Megan that a decent society would take care of its homeless and mentally ill. She just wants them safely out of sight, under a freeway overpass perhaps, or dead in a ditch.

It seems to me that a movement claiming to represent the 99% should consciously take these costs into account--particularly over the longer term. A one day crime spike is not a big deal. A three month increase is a pretty sizable cost, particularly in a city that already has a very high crime rate.

Now, which was a greater source of this crime spike--firing officers or having a protest? We might be able to find out but that would take work, and McArdle doesn't do work. Total crime is up 10% from the previous year, according to Mr. Baumann's statistics, with 9% of that increase being property crime. Burglaries are down 24% but robberies without a gun are up 34%. The greater meaning of the statistics is not clear; the economy has been worsening and DC "has the fastest population growth in the US", both of which could be large contributors to the crime numbers. But let's not bother with nuance; Megan McArdle does not like the idea of protesting income inequality and therefore Occupy DC must be blamed for any increase in crime.

For the life of me, I cannot understand why our libertarian pin-up girl is so worried about the police anyway. If libertarians had their way the government would let private businesses handle her security, or she could always hire her own police force. But McArdle is only libertarian when she is being paid to be libertarian, and would never, ever want to take on the entire expense of her protection and safety. She does not want the taxpayer to pay for schools or health care because she had her daddy and her boss to pay for those, but since she cannot find anyone to pick up that tab for her, she is perfectly willing to spread the cost among the rest of the taxpayers.
Posted by Susan of Texas at 1:35 PM

Cher Horowitz is nicer than Meegan.
~

That's some grade-A concern trolling from Julian Sanchez, if McArdle is representing him accurately (a big if, admittedly).

Sanchez said the protesters only represent themselves and that they think there is no political redress for our problems. McArdle twisted, bent and stretched that to support what she wanted to say about protesters.

Draining police resources needlessly is a tremendous good. Imposing costs on the community is something ows ought to do in a calculated way.

Yes, that is something we need to look at. Wall Street gave millions to beef up the NYC cop presence at Occupy Wall Street and I see no reason why we cannot bleed them a little. Several large moving protests in different locations at the same time would give the cops lots of overtime and make the rich think twice about how much they want to spend to stifle dissent.

It would be interesting, Susan, to compile a list of topics MM writes about over a given period--3 months, say. And then to see how many of these are relevant to business and economics.

It would also be interesting to chart, over that same period, the important biz and econ news stories, and see how many of these MM fails to explain, clarify, or inform her readers about--as opposed to those about which she does little more than express an opinion based on personal anecdote and "as far as I know."

Jezuz Christ that post by Megan is so stupid I think my eyes are bleeding just from reading excerpts. Yes, protests that become a locus for homeless and mentally ill people should be run in a self conscious fashion to exclude homeless and mentally ill people. How very obvious. And the "spike in crime" she speaks of clearly isn't a "spike in crime" at all, if it exists, but merely a displacement of crime from places with larger police presence ( presumably the area of the protest which becomes safer) to areas of less police preesnce ( presumably the same areas which didn't have much of a police presence before because they are filled with people of little importance who don't get policed except in the active, violent sense of the word.)

Mr. Wonderful, that's right, she is consumed with trivia while the financial industry is going through utter turmoil. But she can't discuss that!

Aimai, wouldn't we see crime spikes in all Occupy cities if all the robbers and thieves are so inspired? Murder, rape and arson went down, so it seems that large protests actually decrease serious crimes, according to the McArdle formula.

"It does not occur to Princess Megan that a decent society would take care of its homeless and mentally ill. She just wants them safely out of sight, under a freeway overpass perhaps, or dead in a ditch."

She and the 1%ers don't think of it as "Society helping the needy", but as The MOTUs (them) being forced to pay hard-earned money to support leaches and bums. You know, Welfare Mothers and Teachers and teh Gays.