For Their Own Good

GOP presidential candidate Newt Gingrich said Thursday that “really poor children” have bad work habits and no knowledge of how to make an income “unless it’s illegal.”
Doubling down on his argument that children in poor neighborhoods should be employed as janitors in schools, Gingrich argued that the best way to teach children in poor neighborhoods good working habits is to put them to work as soon as possible. 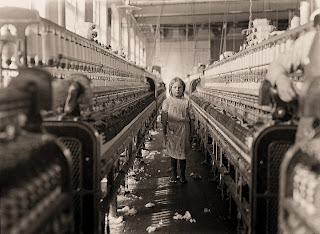 “Start with the following two facts,” Gingrich said Thursday at a campaign stop in Iowa.


“Really poor children in really poor neighborhoods have no habits of working and have nobody around them who works, so they literally have no habit of showing up on Monday,” Gingrich said. 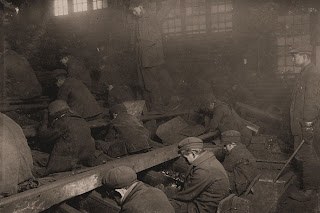 Gingrich said every successful person he knows started working at an early age in explaining his position that schools should hire poor children in their neighborhoods for part-time jobs as assistant librarians or assistant janitors.

“What if they became assistant janitors and their job was to mop the floor and clean the bathroom?” Gingrich added. 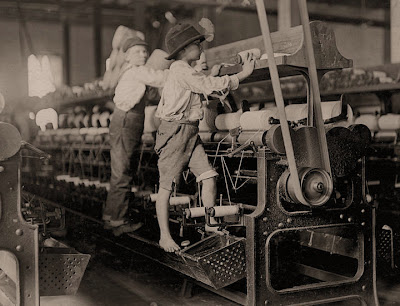 The comments from Gingrich echo the argument he first made in November, when he called child labor laws that might prevent the hiring of school children as janitors as “stupid.” 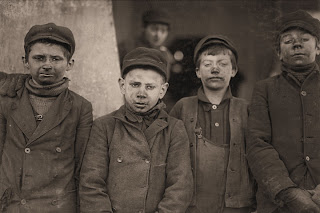 “This is something that no liberal wants to deal with,” Gingrich said at the time. “Core policies of protecting unionization and bureaucratization against children in the poorest neighborhoods, crippling them by putting them in schools that fail has done more to create income inequality in the United States than any other single policy. 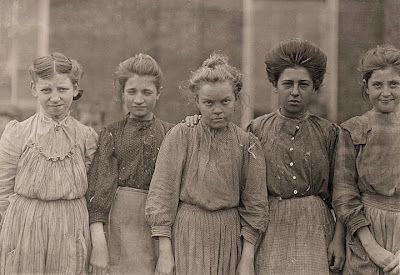 “It is tragic what we do in the poorest neighborhoods, entrapping children in, first of all, child laws, which are truly stupid.” 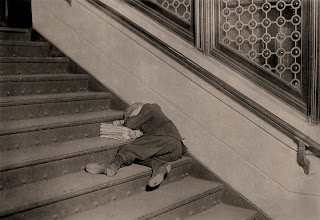 There were many people just like Newt Gingrich back in the day.


The Manufacturers Record published an article against attempts to bring an end to child labor (4th September, 1924)

This proposed amendment is fathered by Socialists, Communists, and Bolshevists. They are the active workers in its favor. They look forward to its adoption as giving them the power to nationalize the children of the land and bring about in this country the exact conditions which prevail in Russia. These people are the active workers back of this undertaking, but many patriotic men and women, without at all realizing the seriousness of this proposition, thinking only
of it as an effort to lessen child labor in factories, are giving countenance to it.

If adopted, this amendment would be the greatest thing ever done in America in behalf of the activities of hell. It would make millions of young people under eighteen years of age idlers in brain and body, and thus make them the devil's best workshop. It would destroy the initiative and self-reliance and manhood and womanhood of all the coming generations.

A solemn responsibility to this country and to all future generations rests upon every man and woman who understands this situation to fight, and fight unceasingly, to make the facts known to their acquaintances everywhere. Aggressive work is needed. It would be worse than folly for people who realize the danger of this situation to rest content under the belief that the amendment cannot become a part of our Constitution. The only thing that can prevent its adoption will be active, untiring work on the part of every man and woman who appreciates its destructive power and who wants to save the young people of all future generations from moral and physical decay under the domination of the devil himself.

Appealing to people's consciences to end child labor was unsuccessful.


It took the Great Depression to end child labor nationwide; adults had become so desperate for jobs that they would work for the same wage as children. In 1938, President Franklin D. Roosevelt signed the Fair Labor Standards Act, which, among other things, placed limits on many forms of child labor.

It is always about money. The goal of Corporate America is to lower wages, eliminate benefits and unload expenses onto the taxpayer. The obscene income disparity that results is then blamed on the powerless. This method works in America because we are accustomed to dividing ourselves into the haves and have-nots by race. We drown out our guilty consciences by claiming we are morally superior (exceptional) because we are raised in a "Christian democracy."

All photographs are by Lewis W. Hine.
Posted by Susan of Texas at 11:40 AM

Excellent use of photos to drive home the baseness of Gingrich's inhuman cant.

What strikes me too is that Gingrich's notion of work is mindless work. It takes stamina and discipline to be an artist, but you learn those through doing the art if you love it, and then you create things that you love and that other people love, and make the world richer in interesting experiences. But Gingrich is not interested in cultivating these fruits of education. "Children should do dog work for free so they will learn to do dog work as adults." This is the great idea guy's great idea, this is his vision of what humans are for. I mean, quite apart from the unnatural cruelty and callousness of this proposal is just the stunted mean quality of the imagination. What a despicable blowhard.

Heaven forbid those poors get uppity and aspire to rise above their station of birth. Better to condition them young to accept the life of a working drone. Who else is going to iron Newt's shirts and park his cars at fancy restaurants?

You know, for the party that arrogantly believes it is the sole definer of what is patriotic and American, the attitude that children shouldn't dream to achieve more than their parents and educate themselves to pull out of poverty strikes me as disgustingly UNAmerican.

Well, Kia--- I cannot say that ( share your feelings about "dog work". Many of those jobs that Newt speaks of are necessary and important. The work is more useful than any "work" Newt has ever performed. They deserve to be paid accordingly. The jobs aren't going anywhere-- and god forbid, let us hope they don't go to children. Let me remind Mr. Gingrich of this very simple fact that seems to have escaped his mind. Children do have a job and somewhere to go every weekday. It is called school.

Even though I feel dirty even partially agreeing with Gingrich's suggestion (gosh, and the way he arrives to the conclusion, and his assumption. ugh. disgusting)...

I think encouraging at risk children to spend more time around positive adult role models would be a good thing, and that encouragement took the form of paid "assistantships" or apprenticeships, I don't think that would be bad.

Now I need to go take a shower.

I was unfamiliar with that photographer until now. Powerful stuff. The shot of the child sleeping on the steps hit me in the gut. For some reason, it's a more powerful image than other, maybe more cliched, images of suffering.

Maybe it's because people (parents, teachers, etc) often forget the importance of sleep and how children need so much more of it than adults.

- Are there no prisons?
-Plenty of prisons

-And the workhouses? They are still in operation?
-They are. I wish I could say they were not.

-The Treadmill? The Poorhouse? Still in full vigour?
-All very busy, sir.

From the campaign literature of Sir Newton Gingrich, Bart. standing for Parliament from the Riding of Poorstompinborough, Essex, 1885.

With apologies to Mr. Dickens.

Newt Gingrinch is vile. How on earth could such a ghastly human being ever be considered for any office, let alone a "frontrunner" or POTUS?

A huge portion of this country is vile, sick, beyond redemption.

If only Newt and his admirers would come down with a particularly vicious and painful form of leprosy.

I'd actually be GLAD. I might even wonder if there is a God.

I accept Gingerich's premise: we should pay people so they learn the value of work and showing up on time. So, obviously, children should be paid for going to school and their parents should be paid for helping them get ready. Children who are well fed and dressed appropriately and who never miss class (and are also not sent to school sick) should be paid a daily stipend to be split between the child and the parent since both contribute to a healthy home attitude towards learning.

Under my plan children who progress well through all eight grades with good attendance should have "earned" a good nest egg to help them pay for school books and necessities at the highschool and college level.

Children whose parents can't get it together to help them get to school would still receive the stipend but it would go into a savings account in the child's name and they would be given extra help from school counselors and nurses who would be assigned to supervise them when the parents failed to do so.

Of course, it would take a lot more money to do this and pay the kids for attending school. But I plan to tax Newt Gingerich to get enough money to make this work.

OTOH, this is good news for John McCain!

Gingrich learned early on that certain classes of people don't deserve anything other than at most menial (slave) labor. Recall Newt’s dissertation topic was titled “Belgian Education Policy in the Congo: 1945-1960.” written while cowardly Newt was busy not serving in Vietnam.

Remember the "Kenyan, anti-colonial behavior" he ascribed to President Obama?

It's clear what Newt thinks about "Certain" people...

And just where does Newt propose public schools get the money to pay these kids? He certainly doesn't want anyone's taxes raised, no sir.

Also: a shocking number of schools have closed their libraries, or at least eliminated the librarian and any operating funds, due to budget cuts. There's no librarian to be an assistant to.

One thing I haven't seen anyone mention: The reaction to the last depression was to limit child labor so more adults could work. Gingrinch's reaction to this depression is to do exactly the opposite. This will help ... how?

Hi, Susan. Great post. I did one a little while back, using photos from the same source: http://doves2day.blogspot.com/2011/11/its-hard-knock-life.html

The photo of the boy sleeping on the steps - he's a newsboy (seller of newspapers) and one of my commenters went off about how being newsboy was a great and noble job for young boys, and how could I possibly include that as an example of bad child labor? I did some research about newsboys - maybe in the 1960s it was all wholesome and great for newsboys to ride their bikes up Main Street and deliver papers, but in the 1890s and 1900s, newsboys lead a terrible life. Often kids as young as five worked late into the night selling newspapers.

Gingrich hasn't set foot in a poor neighborhood since he left the trailer park for high school. Most poor people I know work two or more jobs - they certainly have a work ethic that's about showing up to work on time.

But what if these punks try to unionize? Obviously they're too young to vote.

Brian B: "
One thing I haven't seen anyone mention: The reaction to the last depression was to limit child labor so more adults could work. Gingrinch's reaction to this depression is to do exactly the opposite. This will help ... how? "

Well, the obvious effect would be to throw some more adults out of work, and to help lower adults' pay. Which for the right is a feature, not a bug.