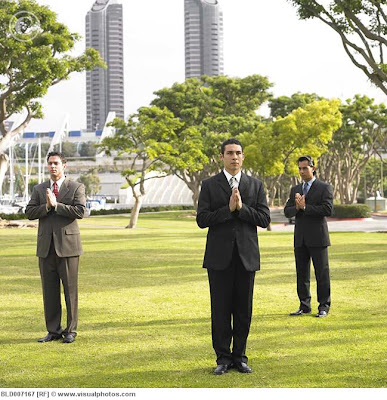 In Business We Trust

Since propaganda is designed to appeal to people's fears and wants, it's interesting to take it apart and see what tactics our authoritarian leaders will use and which emotions they will try to manipulate. Writers always reveal themselves in their work, even when it is propaganda. Let's look at a fine bit of crowd control ostensibly written by Jeb Bush for The Wall Street Journal.


Congressman Paul Ryan recently coined a smart phrase to describe the core concept of economic freedom: "The right to rise."

We start off by identifying our group via a name check of our leader. We now know exactly what the author will say and with whom he will be aligned and authoritarian followers will automatically be receptive to what he has to say.

"I'm one of you" is only half of the identification process. Authoritarian leaders must also allude to those outside of the tribe and remind their followers that they are in danger from The Other.

Repetition for effect, a fundamental propaganda tool. Simple declarative sentence for simple minds. The propagandist admits that people are having a hard time and are not getting rich in this, the land of milk and honey. He pushes competition over cooperation, which would decrease his own power and increase the power of the people. He tells us that people should be fighting to help businesses, placing the needs of businesses over the needs of people, which is why Megan McArdle is trying to convince us that corporations should have the right to walk away from unsuccessful property deals and people should not.  The propagandist, like the slave dealer, wants to take away people's civil rights to make money, the crassest and most immoral reason possible.

Jeb Bush says that the power that he has and wants to keep actually belongs to the people--that they are taking the risks and gaining the reward or suffering the consequences of their actions. The propagandist utterly ignores the facts, that businesses took the risk, gained the rewards, and dumped the risk on the taxpayer. He wants to make Big Business into an authority that must be protected and supported at all costs to humans.

It certainly does, unfortunately.


Freedom to succeed as well as to fail, freedom to do something or nothing. People understand this. Freedom of speech, for example, means that we put up with a lot of verbal and visual garbage in order to make sure that individuals have the right to say what needs to be said, even when it is inconvenient or unpopular. We forgive the sacrifices of free speech because we value its blessings.

Civil rights, the rights of the people, are conflated with business rights, the rights of the rich who control the economy. By constantly dangling the hope of wealth in front of the poor, the propagandist is able to get away with giving legal rights to corporations. The authoritarian leader simultaneously takes away the civil rights of the people but that is only discussed when The Other does it. He also throws in a little Christian dog-whistle and flag waving to reinforce the bonds of the tribe and distract the follower from his slight of hand.


But when it comes to economic freedom, we are less forgiving of the cycles of growth and loss, of trial and error, and of failure and success that are part of the realities of the marketplace and life itself.

"Free market" is a lie. Money is power and power does not want freedom, it wants control.


Increasingly, we have let our elected officials abridge our own economic freedoms through the annual passage of thousands of laws and their associated regulations. We see human tragedy and we demand a regulation to prevent it. We see a criminal fraud and we demand more laws. We see an industry dying and we demand it be saved. Each time, we demand "Do something . . . anything."

Leaders do not want their followers to realize that their leaders actually make plans and carry them out, leaving everyone else poorer. "Jeb Bush"  pretends that the people accidentally curtailed their own freedom by "letting" elected officials make laws. In the same paragraph he says that the people demanded those laws out of a knee-jerk emotional reaction to society's problems. So Bush is simultaneously pinning responsibility for our economic problems on the people and absolving them of responsibility for the problem. Followers do not accept responsibility for the consequences of their actions since they give up all power to their leaders. The contradiction might seem a little crazy but authoritarian follows judge themselves by how well they obey, not by how well they think.


As Florida's governor for eight years, I was asked to "do something" almost every day. Many times I resisted through vetoes but many times I succumbed. And I wasn't alone. Mayors, county chairs, governors and presidents never think their laws will harm the free market. But cumulatively, they do, and we have now imperiled the right to rise.

Leaders have succumbed to human weakness by giving in to the people and now "we" have hurt Baby Jesus the Free Market.


Woe to the elected leader who fails to deliver a multipoint plan for economic success, driven by specific government action. "Trust in the dynamism of the market" is not a phrase in today's political lexicon.

The foolish people demand government action and do not have faith in their Free Market religion. The followers are not trusting their authority. Again, business is placed above humans in the authoritarian line-up.


Have we lost faith in the free-market system of entrepreneurial capitalism? Are we no longer willing to place our trust in the creative chaos unleashed by millions of people pursuing their own best economic interests?

And in case you didn't get the point the first time, here it is again, using the touchstone word "faith." Faith is a good thing, right? God demands faith and so do all the other authorities. Do you not trust your leaders? They are looking after your economic interests! Except when they aren't!

What happens next is rather interesting. Despite the libertarian dog-whistles, the little hints that libertarians are One Of Us, "Jeb Bush" does not support Ron Paul and the latter must be subtly isolated as The Other, so that his followers toe the Republican authoritarian line.


The right to rise does not require a libertarian utopia to exist. Rather, it requires fewer, simpler and more outcome-oriented rules. Rules for which an honest cost-benefit analysis is done before their imposition. Rules that sunset so they can be eliminated or adjusted as conditions change. Rules that have disputes resolved faster and less expensively through arbitration than litigation.

More repetition, and a sentence that neatly puts libertarians in their place, on the fringes. Worse of all, they are pegged as dreamy Utopians, the same claim made of liberals. Could there be anything more embarrassing to an American authoritarian follower than to be equated to a hippie?


In Washington, D.C., rules are going in the opposite direction. They are exploding in reach and complexity. They are created under a cloud of uncertainty, and years after their passage nobody really knows how they will work.

Nobody knows anything ever.


We either can go down the road we are on, a road where the individual is allowed to succeed only so much before being punished with ruinous taxation, where commerce ignores government action at its own peril, and where the state decides how a massive share of the economy's resources should be spent.


Or we can return to the road we once knew and which has served us well: a road where individuals acting freely and with little restraint are able to pursue fortune and prosperity as they see fit, a road where the government's role is not to shape the marketplace but to help prepare its citizens to prosper from it.

Stick with me, kid, and I'll make you rich. That is all it takes to manipulate and control. Where would our con men be without greed?
Posted by Susan of Texas at 12:24 PM

Fine use of 'ostensibly', he bowed.

Freedom to succeed as well as to fail, freedom to do something or nothing.

Freedom to have everyone else pay for your failures sold separately, for free, to the right people.
~

"Trust in the dynamism of the market" is not a phrase in today's political lexicon.

Sweet fuck-all, it seems to be the ONLY phrase in the political lexicon these days.

Jeb Bush. The stupider Bush boy? Why are we listening to him, again?

And, throughout it all, the sand in the eyes spelled "we". We were born to a family of millionaires. We made more millions and/or acquired political clout and power thanks to family connections, without ever having to achieve anything noteworthy.

Why can't the statists leave us alone, leave us free to continue to embrace our destiny? Why must they (everyone we have no use for) hobble us with all their laws? Haven't we been doing great so far? So come on. Who's with us?

Interesting that Jeb Bush, a GOP mainstreamer if there ever was one, is now using the Rothbard/Mises Institute term "statist". THAT's a "dog whistle"!

The straight line of gradual and controlled growth is what the statists promise but can never deliver.

Rules that have disputes resolved faster and less expensively through arbitration than litigation.

There's a reason corporations loooove arbitration. Individuals, not so much.

Of course, if your plan is to dispense with the court system because it's not efficient, a great way to make sure it's not efficient is to underfund it chronically for about 30 years so that it takes years to get a simple divorce.

It amazes me that Bush does not even try to be coherent but when your tribe communicates by waving semaphores I guess you don't have to make any sense.

when i read the "right to rise", i thought it would be about the right to erection medication lol

Jeb Bush. The stupider Bush boy? Why are we listening to him, again?

Because he doesn't squint as much as his brother.