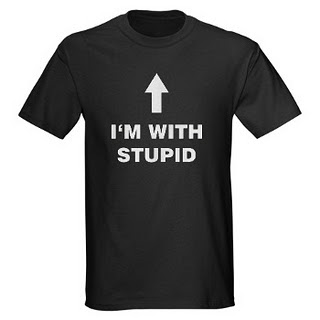 Have you ever wanted to see what it takes to get Megan McArdle excited? Evidently it's quite easy: just criticize billionaires who support her husband! Let's watch Maisie McLazy go apeshit over the Koch brothers and all their lovely money, as she pours out a torrent of twittering support. (Start at the bottom and work your way up.)

@empeos Again, HOW changed discussion? Support for AGW went up during period of greatest funding, then plummeted when Obama was elected.
1,287,455,474,000.00 via TweetDeck .

@empeos You have retreated from that to saying the Kochs fostered some slight but consequential shift in public opinion, still w/o data.
1,287,455,215,000.00 via TweetDeck .

@empeos The Kochs are becoming the witches of the left: they explain all bad things that would otherwise be scary and incomprehensible.
1,287,455,073,000.00 via TweetDeck .

@empeos This myopia is natural for Greenpeace, but it's basically rather silly. Time frame is also rather long. (1/2)
9:08 PM Oct 18th via TweetDeck .

@empeos It's as if they claimed that George Soros donated hundreds of millions to fund action on financial legislation.
9:07 PM Oct 18th via TweetDeck .

@empeos the Greenpeace report treats all donations to conservative groups as if they were directly spent on opposing climate science.
9:06 PM Oct 18th via TweetDeck .

@empeos Why, that the Kochs have injected significant doubt into public opinion. Presumably you have some data that support this assertion?
9:02 PM Oct 18th via TweetDeck .

@empeos Really? You keep saying that, but where's your proof? Give me correlation, even.
9:00 PM Oct 18th via TweetDeck .

@empeos You're the one defending. I support c&t, but I don't think the Kochs killed it; I think it's hard to raise energy prices.
8:52 PM Oct 18th via TweetDeck .

@empeos Do you think Manchin has a problem because Kochs are running ads, or b/c c&t would devastate WV economy?
8:49 PM Oct 18th via TweetDeck .

@empeos For correlation--not even causation--need measured change in Koch funds/effectiveness that matches timing, not "existence of Kochs"
8:48 PM Oct 18th via TweetDeck .

@empeos Was huge shift in public opinion on Iraq because Soros spent a whole bunch of money, or b/c the downside became more apparent?
8:45 PM Oct 18th via TweetDeck .

@empeos More parsimonious that people were happy to support "doing something for environment" when "something" was both vague and unlikely
8:44 PM Oct 18th via TweetDeck .

@empeos What massive surge in anti-climate change propaganda? Public opinion did not shift b/c of a tidal wave of Cato white papers. (1/2)
8:42 PM Oct 18th via TweetDeck .

@empeos If you think there was a Koch-supressed groundswell of support for increasing price of gasoline/electricity, get out more.
8:31 PM Oct 18th via TweetDeck.

RT @reihansalam: Incredible. Just read a serious person write that voters wouldn't have opposed cap-and-trade if not for the Kochs. Amazing.
8:26 PM Oct 18th via TweetDeck

Wow, that's some serious love for the oil and gas industry mavens! Naturally McArdle utterly ignores their tea-party organization and support, making it all about cap and trade and a few Cato white papers. But what else can she say when they support P. Suderman, boy husband, and all her bestest buds? (And let's not forget that she might need some of that wingnut welfare herself, the way she keeps screwing up in The Atlantic.)

But please don't think that McArdle tongue-bathes the Kochs just because they give her money, via her husband. McArdle met David Koch at a cocktail party and he seems very nice to her, so naturally he wouldn't try to screw over his fellow Americans for money. To read more go here, where you can see McArdle explain in great detail how the Kochs couldn't possibly be behind the tea parties, something that was just coming out at the time and has been amply proven since then. McArdle, of course, is far too much of an ideological hack to either find out the truth or care about the truth, but it sure does make her look very stupid (again!) to be so very, very wrong (again!).

But hey, nobody ever said that being educated means you're intelligent. It just means you know what to do to get people to give you Ivy League degrees for little work and no intellectual growth.

It wouldn't be quite so bad being ruled over by a money-hungry, deeply crooked elite if they didn't shove their lack of intelligence in our faces constantly. It's just adding insult to injury.
Posted by Susan of Texas at 9:16 AM

Look at the time stamps between those Tweets. My goodness, that's just psychotic.

She has a post up that insists that Rachel Maddow correct an alleged error from her show. Because McArdle cares so much about the facts and correcting errors.

She really is a clueless bint, isn't she? She does not posses even an ounce of self-awareness.

nobody ever said that being educated means you're intelligent.
I would posit that McMegan has neither been educated nor is she intelligent, so the statement above, while true, is irrelevant to the hack at hand.

I gather David F. Brooks and other NYT editorial columnists are glowing examples of "intelligent" and educated conservatives.

Is there really much difference between them & Arglebargle?

The pay for lying is high. The reward for truth telling ... not so good for most people.

Megan comes from a family that is actually intellectually intimidating, remember. So she's naturally smart through osmosis and shit. That's why she could spend her college years longingly staring out windows instead of learning and still be better than you.