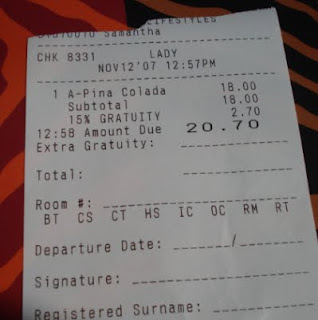 This is a busy weekend for the Snark so we will be picking the low-hanging fruit today.

God only knows why, but Megan McArdle thinks we all care that she has to put up with other people when she goes out for a drink.

The gentrification boom in DC has hit up against a limited supply of bars--and neighborhood commissions that are very resistant to quickly opening more of them. The result is that no bar stays un-crowded for long; if it's any good at all, it's soon overwhelmed with a tidal wave of people fleeing the standing-room-only crowds at all the other bars. The bars aren't like this because most people in DC want to spend their Friday nights packed like cheap sardines; the bars are like this because there are so few of them in the areas where people under 35 live, that the only people who can bear to be in them are the people who will tolerate any conditions, including those of veal calves, if only they can endure them while holding a drink.


This is a new development in the areas of DC where, as it happens, Matthew Yglesias, Ryan Avent and I, all like to go out of an evening. When I moved to DC a scant three and a half years ago, there were enough bars where you could enjoy a Thursday night seated in the company of friends. Then came January 2009, when I held a birthday get-together at a previously local place on 11th street. Unfortunately, there wasn't much getting together; more than half the people were turned away because of overcrowding. Several bars had been shut down in Adams Morgan because the weren't serving enough food to comply with their tavern licenses; the result was that Adams Morgan relocated to U Street.

Since then, this pattern has been repeated over and over; any bar that opens is pleasant for a month or so, then completely, miserably jammed.

I think it's fair to say that our views on the relative importance of regulatory factors may be jaundiced by this--but in DC, regulation (and population pressure) clearly is the driving factor behind the lack of cozy, comfortable spots to get a bite and a beer.

It is very difficult to understand why McArdle thinks she is entitled to a bar that is quiet, cosy, in her neighborhood, has excellent food, and will always stay just as she wants it to stay. She may as well whine that she doesn't live next door to her favorite clothing store or bookstore or museum. She blames regulations without describing them or their history because that would mean acknowledging that regulations aren't just something handed down by a fascist, faceless government because liberals are all nanny-staters--they are often in place in answer to public problems and demands. Sure, she admits:

One possible solution is upzoning--neighborhood bars aren't so obnoxious when you're ten floors above them. But of course, the local residents tend to fight that as well

But she wants what she wants when she wants it, and like every spoiled child she doesn't understand why she can't get her own way. It's regulation's fault! Down with regulation! Get rid of them all! And when a bar moves in across the street from McArdle, she can bitch and whine about how the government destroyed her peace and quiet because governments can't do anything, ever.

Here's a suggestion for McArdle and all her little friends: Entertain at home. Our parents and grandparents did it because they couldn't afford to spend money on drinks and overpriced pub food. They watched tv, played cards, talked, and just spent time together instead of expecting to be waited on and entertained. This merry little band of bloggers bores everyone to death with their endless discussions of the best drinks and foods and cooking methods, but never seem to actually mix those drinks or cook that food. Creating something with your own hands and heart and then sharing it with your friends is infinitely more satisfying than signing a $150 bar bill and having nothing to show for it but a headache and indigestion.

Sometimes people are too tired to cook. Our generation has a way of dealing with this problem: we drive to bars. Yes, that means either taxi fees or a designated driver (we have no public transportation here). But somehow we manage to pull through.

There are a lot of people right now who can't afford to eat, let alone eat out. McArdle's attitude is that they have too much food anyway. (Note that she also complains that nobody cooks at home anymore). It is very unseemly to use The Atlantic and her privileged position to whine that there aren't enough places for her to spend all her ill-gotten money.

One final thing: McArdle came up with the same title as us. Heh.
Posted by Susan of Texas at 8:52 AM

"Matthew Yglesias, Ryan Avent and I," explains a lot about Yglesias' libertarian streak of stupid.

I swear it's just a younger, hipster version of the old village - juice-box mafia indeed.

It makes you wonder wonder what they'll be like in ten years. Probably the same, jockying for social position and Centering us to death.

Thing is, there are plenty of quite bars in DC. She is just hanging out in neighborhoods that have a daily surge of suburban workers out for a drink after work. The quite bars are just in neighborhoods she wouldn't ever consider visiting. All she is doing is (once again) exposing her incredible provincialism. A world that includes 10 block areas in a few, select, East Coast cities.

What fish said. That's it exactly.

Also, "[...]as it happens, Matthew Yglesias, Ryan Avent and I, all like to go out of an evening."

Is "go out of an evening" a typo or yet another annoying McArdle-esque Olde World affectation?

Jeezus Christ. That's all I have to say. I dislike expressions like this but it seems to fit--she really thinks her shit is sugar. I mean wotthell? Desirable places filled with people. No one goes there anymore because its too crowded!

Hmm...let's see...for $20.50 she could buy herself and her buds a bottle of pina colada mix and a bottle of cheap rum and get shit-faced at home without having to put up with the REST of the gentrifying yuppie scum that moved into her neighborhood AFTER she and Peter got there.

Then there was inviting friends over to my studio apartment: scrabble or just sittin around on the sofa/floor watching MST2000, or was it MST3000? talking, laughing, drinking real good beer or decent wine, or mixing up something fun: ice cream & Baileys or Lemon Sorbet & champagne. Hmmm. Think I'll give a little Xmas party this year.

Is Psuederman allowed to go out of an evening with Katherine Mangu-Ward and Mary Katherine Ham?

aimai: No one goes there anymore, it's too crowded. That's Yogi Berra. Another good one from Yogi: When asked by the server at the pizza parlor if he wanted the pizza sliced in 6 or 8 he replied: I can't eat eight.