Hungry? You're Too Fat Anyway

Megan McArdle, whose empathy for the poor is so great that she wishes them to have less food to eat and therefore be less fat, has turned her eyes once again to the problem of food prices. The recession/incipient depression that Megan's banker friends dreamed up has led to more Americans finding it harder to feed their families. For Megan McArdle, that's a good thing. Sure, she has repeatedly expressed regret and sadness that she is very tall and thin. It send the wrong message to the children. But she also feels sad at the thought of all the poor Americans who are fat. Therefore the Bush (ka)Boom can only be a good thing for us--not her, mind you, just us.

McArdle flippantly titled her economic analysis Time To Short Jenny Craig?, merging those who choose to diet with those who are forced to give up food. In Grannie's day, Megan muses, a woman didn't need all those elite brand names, fancy teas, cooked chickens, drinks out and restaurant meals.

But without a wife at home, who has time to make meals from scratch?

Lots of people, it turns out. They also have time to make sandwiches for work instead of buy them, and comparison shop for better deals on what they do bring home. And looking at the list of what America is cutting back on, I wonder if we'll see a reversal of another trend: America's growing waistline. There is a school of thought which says that the reason Americans are getting fatter is not so much the absolute price of food as the kind of food we consume--what Seth Roberts calls "ditto foods". These are commercially prepared foods which have high calorie density and are what some scientists call "hyperpalatable"--i.e. extremely flavorful. They're also carefully prepared to ensure that they taste virtually the same every time. The easy availability of these foods causes our bodies to kick up our "set point"--what our bodies naturally want us to weigh. Our appetite regulation mechanisms do the rest.

Home prepared meals are much less standardized, and not so fined tuned to hit the salty/sweet/fatty buttons over and over. Also, much of the shopping is done for them when you aren't actually hungry, and so you're likely to pick healthier foods with lower caloric density--committing your future self to behave more virtuously than it probably would decide to on the spur of the moment. A leaner wallet may mean a leaner you.

Woah, there, Megan! Look out! It looks like your strawman there is about to topple over and suffocate you!

What does the grocery decisions of a mildly wealthy woman have to do with people who can't afford to buy as much food anymore? Could it be that you are cleverly and slickly conflating the two so you can diminish the impact of growing poverty, because it might make you feel bad or look bad? Might make you wonder if all your support for derivatives and bankers will get people a teesy bit testy with you? Or is it simply a business decision, in which you hear your master's voice, and as Stephen Colbert so memorably said, write it down, publish it, and pretend you're still a journalist?

So what if people have to eat less and eat cheaper foods? They're too fat anyway. Poverty and hunger are good things! A leaner wallet may mean a leaner you! 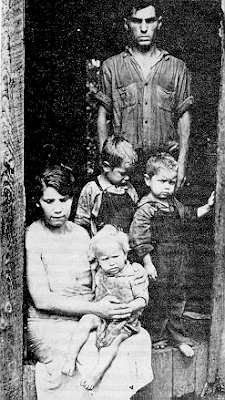 Here is a picture of a lucky poor family during the '30s. See how lean the man's arms are? Not even any muscle left! And the woman holding her baby? Also lean! But you know what? The little children aren't skinny enough. Their little cheeks are still round and fat.

The parents were starving themselves to feed their children.

I guess they just had too much food.
Posted by Susan of Texas at 1:35 PM

I guess McArdle is teaching us something: complete intellectual and moral vacuity may allow one to escape percieving suffering.

I expect we'll see how well that works for McArdle with actual suffering.

"These are commercially prepared foods which have high calorie density and are what some scientists call "hyperpalatable"--i.e. extremely flavorful."

She's a paid writer who doesn't know the difference between which and that. She's one of those snobbish idiots who thinks that the word "that" is uncouth so she uses which all the time.

Could it be that you are cleverly and slickly conflating the two so you can diminish the impact of growing poverty, because it might make you feel bad or look bad?

The LOOKING bad is the worst prospect for her. I haven't seen any evidence that she ever actually feels bad about anything she does or says.

Yet, despite her evident concern about how she is perceived, she seems to be oblivious to how horrifying she looks in columns like this.

And she is clearly demonstrating, yet again, her personal obsession with the moral imperative to be thin. Indulging in "extremely flavorful" food is sinful, limiting yourself to bland home cooking is a virtue. Starvation only brings the poor closer to God.

The woman must suffer the tortures of the damned just deciding what to have for breakfast.

Heh. I've been doing a little dumpster diving in her archives and she always has a justification for her actions. She clings to her elite trappings with a death grip.

Poor people are fat and so thinness shows moral and social superiority. Poor people have bad clothes and so Megan panics when her clothes are shabby. Rich people know the latest gadgets and buy them, so Megan must also. She must live in a certain type of neighborhood, drive a special English car, order from Land's End, and on and on.

The rich kids in prep school told the poorer Megan she didn't belong, and Megan discovered that the best way to survive is to police the rich for them, acting as a social enforcer, to belong.

You're right! She knows the outward trappings of class down to the millimeter, she just doesn't have any.

I'm not entirely surprised. I knew she wasn't from Old Money, but I had this idea that it was at least, you know, Thirty-Something.

Her father became a very successful man, but Megan has said that the kids at prep school were much richer than she. Almost everything she says contradicts something else she's said.

She considers herself elite, yet has said how much she hates rich frat boy behavior. She states that rich people don't consider material goods a sign of wealth, just position, thus her lack of wealth trappings were upper, not lower class. She's said she was just born smarter than others, and also said that she nearly flunked out of college and her GPA was so bad that only her prep school's name got her into Penn. It's too much.

I'm still reeling (/vindicated) by studies a few years ago that found that the ingredients of a Big Mac were, in sugars/fat/etc. proportions, similar to that of SNOT.

You heard me. Human snot.

"Extremely flavorful" my arse. When's the last time you tasted a Big Mac? The whole point is the *absence* of flavor. That's what makes it universal, easily replicable under industrial conditions, etc., etc.

You know, I sometimes feel people here and at Fire M.M. are bit too harsh on her, that she's not actually "stupid," just narrow and unself-aware. But fuck ME. This--class aspects aside--is just dumb. (And she presumes to give recipes.)

Mr. Wonderful, you should have seen her butcher monopsony and coase theory and taxes and other things I know nothing about.

Yeah, I'm harsh. The woman said teachers should be replaced by people off the street, because teachers don't want to do a good job anyway. I decided that if Megan wanted to sow the wind, she could reap the the whirlwind, for once.

"...normal life of a not-particularly-well-off urban thirtysomething seemed positively sybaritic. Three restaurant meals in one week? Drinks out every other evening? Gourmet tea? And what about all the prepared meals--the takeout, the rotisserie chickens, the $5 containers of Wegmans soup?"

I'd like to think that she's describing this as her normal life, but it sounds like she really thinks her lifestyle really is typical of all not-particularly-well-off urban thirtysomethings. As a NPWOUTS myself, this is crazy. Restaurants 3 nights a week? $5 soup? I can afford the odd restaurant meal, and could splurge on $5 soup from time to time, but this isn't my normal diet. I'd rather not spend time cooking, but eating at a restaurant probably takes more time than cooking at home (I can do other things while I'm cooking).

And she buys brand names instead of cheaper alternatives? Who the hell does that? There's nothing wrong with the store brand.