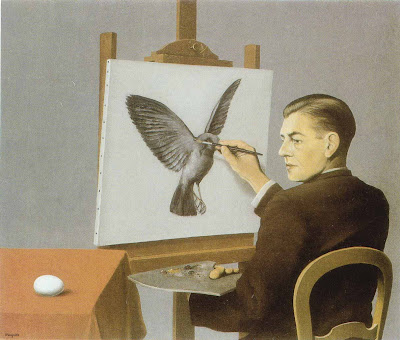 To you, it's an egg. To me, it's the freebird of the marketplace.

Let's take a little look at how ideology shades reporting. When a propagandist sees a news event or interpretation of a news event from another reporter or commentator, he will disregard facts that contradict his or her emotion-based and/or bought-and-paid ideology. He fits the event into his pre-established network of ideas and emotions, and anything that doesn't fit is simply glossed over or ignored.

Megan McArdle reads a report about loans and 401(k)s. She sees that more people are taking out loans on those 401(k)s, and reacts.

Via Felix Salmon, I see that over 20% of Fidelity 401(k)s now have loans out against them. Since Fidelity is one of the biggest players in the space, it's reasonable to assume that this tells us something about the state of American 401(k) plans.

Felix points out that anyone who's planning to take a loan against their plan should be less heavily weighted in stocks. This is true, but I'd like to make a different point: you should not plan to take a loan against your 401(k)....401(k) loans are especially tempting in a down economy like this, when it may be hard to get other kinds of credit. Unfortunately, they're also especially risky. If you lose your job, you're probably going to have to pay the loan off in full, immediately--or have it count as a withdrawal from the account. If you are younger than 59 1/2, that means you'll owe income taxes on the full amount, plus a 10% penalty. ...If a 401(k) loan is the only way to avert something truly catastrophic--foreclosure, the death of your child from an operable brain tumor--okay, go ahead. But they are a bad idea for anything less pressing (and I include things like school tuition in the "less pressing" category). It's all too easy to end up in a deeper hole than you were before.

So far, so good. It's not a good idea to take out loans for "less pressing" expenses because of penalties. Anyone could agree with that.

But the rising rates of loans and withdrawals show more people have turned to their savings to cover basic expenses, McHugh said. She added that second-quarter rates tend to be higher as parents look for ways to cover college tuition.

Again, so far so good. But McArdle ignored the end of the article, the part that implicitly states that people are suffering in this economy, the economy McArdle said would not go into a recession, let alone a depression. The one that McArdle said is recovering.

Nevin Adams, editor at plansponsor.com, a site for the retirement-planning industry, said the results were somewhat surprising since other plan providers had reported falling rates of loans and withdrawals recently.

But since Fidelity serves many smaller businesses and more varied geographies than do competitors, it may have come across a trend sooner than others, Adams said.

"Unemployment benefits have been running out for people, and it's possible they're seeing a double-dip of withdrawals from people trying to make ends meet," he said.

It is very much in her best interest to shift blame on the individual for the financial industry's gutting of the economy. This is the best of all possible economic systems in the best of all possible worlds, she insists. People are borrowing money against their retirement to save their homes and keep their kids in school because they no longer have any income. McArdle reads that, yet her next article on the issue says the following:

Suddenly, it is personal irresponsibility that is to blame for the economy, not Bush's tax cuts and unfunded wars and globalization and the unregulated shadow financial industry. It's not job loss, it's too many self-indulgences. All you need to do is practice some personal discipline. Some---austerity.

Bankruptcy may be the solution to excessive unsecured debts (it's not for tax debt, and almost never for student loan debt unless you're totally and permanently disabled; if you have those kinds of debts, then you just need to work something out with the relevant authorities.)

I know that bankruptcy doesn't discharge student debt, but it can discharge tax debt. If you owe the IRS money you can declare bankruptcy to pay it off under certain circumstances. I'm not sure if she's talking about something else or is just wrong. Either way, McArdle ignores the article's mention of unemployment in favor of the half-true version in which people are drawing down on their 401(k)s for daily expenses; are in debt because they are irresponsible.

Bankruptcy may be the only answer. But even before you contact a bankruptcy attorney, you need to sit down and get serious about your money. Get out your bank statements and look at all your expenses, including the cash withdrawals. Look at your fixed costs, and see how much that leaves you for variable expenses like food. You may simply be overspending on crap, in which case I am a big fan of the cash budget, and have been since my early days as a broke young journalist with monstrous student loan payments. Cash provides automatic discipline; it's hard to rationalize overspending when you can see just how little is left for the rest of the month.

Or you may have excessive fixed costs. If the fixed costs don't leave you enough room for food, utilities, and sundries like car repairs, then you need to bite the bullet and shed some of them. That may mean letting go of a treasured car, boat, or house. Even more painfully, it may mean coming up with cash to pay the difference, if the asset is underwater. Again, if it's bad enough that you need to kite debt, it's bad enough that you need to be an adult and let the beloved, debt laden possessions go.

It's just a matter of personal responsibility. Even if your asset is underwater, you must pay it off. (Unless you're a corporation.) Shame on you for taking out a loan on your 401(k) to pay your Starbucks bill. If McArdle were forced to defend herself she would probably say that since it is too difficult to know how many people are unemployed and how many are just greedy consumerists who spend all their money on houses, cars, or consumer goods, the little people must suffer during these hard economic times and give up their beloved, debt laden possessions. The bankers, however, are a different story.
Posted by Susan of Texas at 10:18 AM

What does she think the collapse of the housing market means? Does she not get that there's no one to buy these imagined beloved assets? She thinks there's some huge backlog of consumer demand for "houses, boats, cars?" You can't sell your fucking house. You can't get out from underwater. You can't move to find another job. There are no jobs. Jeezus christ, so much stupid in such a small package. "I've seen colleagues...but not at the Atlantic..." and what a suck up. Oh yeah, baby, at the Atlantic too. Its not like its something that doesn't happen to the smart people.

I only wish McMegan and the rest of the blithering "personal responsibility" scolds could meet someone like my former neighbor. Good man and virtuous--everything that the scolds say all of us should be.

Lost his career-track job back in 2002. At the time he had a half-paid-for house, wife and two kids. Spent a year unemployed, then started taking any kind of work he could get. By late last year, he was working two jobs, she worked one part-time while the kids were in school--and it still wasn't enough. They sold the house, moved into a tiny apartment, and then he lost one of his jobs when the restaurant at which he washed dishes closed. Now he's living in his car while she and the kids are back with her mother.

He's 50 years old, and he will never again hold another job that offers anything approximating a career track. Employers look at his resume and see he's been away from his field for 8 years, so he might as well not even have his degree or experience. Then they see he's middle-age and, oh , well, thanks for coming to the interview.

But I guess that, by McMegan's lights, it's all his fault anyway. After all, he DID vote Republican every election since '82.