Get Your War On 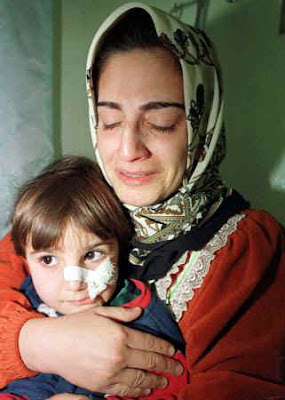 Our work here is done. On to Iran!

Glenn Greenwald takes apart Jeffrey Goldberg, and the zombie press who are always wrong and never in doubt. The biggest mistake Iraq war boosters made was ignoring any evidence they did not want to see. They examined any argument that would support their already set goals, arguing them in exhaustive detail, but ignored facts that might invalidate their arguments.

[James] Fallows also ignores the fact that in the very first sentence of the article, Goldberg asserts a highly controversial and vital proposition as though it's indisputable fact: that of Iran's "pursuit of nuclear weapons." Someone who begins his article by slyly assuming as fact a central proposition which is actually very much in doubt -- and does so by simply ignoring the substantial evidence which negates it, as in: pretends that contrary evidence does not exist -- is most assuredly not someone writing from "a strictly reportorial perspective." It may well be that Iran is pursuing nuclear weapons -- there's also evidence suggesting it might be -- but to depict that proposition as a given, by steadfastly ignoring the substantial evidence to the contrary, is quite redolent of those who did the same thing seven years ago with regard to The Grave Iraqi Threat. Someone writing from "a strictly reportorial perspective" would have acknowledged -- rather than concealed from his readers -- the substantial cause for doubt about that claim, one that shapes the entire article (and the entire debate over attacking Iran). All of these deficiencies stand separate and apart from Goldberg's past conduct.

Look at how Megan McArdle made her decision to support Bush in 2004; her work is an especially transparent and emotional example of argument by ignorance, and deeply influenced by a desire to assert superiority over others:

Let me outline what I think about the way the administration approached Iraq.

I think we chose to go to Iraq, we didn't have to. But I'm okay with that, unlike a lot of libertarians.

Since McArdle would not have to suffer any personal consequences and cannot empathize with people she doesn't know, she does not consider any potential loss of life and suffering, either for Americans or Iraqis. Therefore McArdle did not examine the arguments of members of the military, government, or public who discussed the consequences of invasion. The same thing is going on now; the truly terrible and completely avoidable consequences of attacking Iran are hand-waved away. What do the dissenters know? They're just soft-hearted and soft-headed liberals.

I think that the decision to invade Iraq had a lot of reasons behind it, of which only a few were discussed with America. And I'm also okay with that, unlike a lot of libertarians.

McArdle trusts her elite implicitly, and believes they know better than she, just like she believes she knows economics better than the hoi polloi who would be harmed by her favorite policies.

I think that Iraq was not necessary to the war on terror, but I still think it's possible that it could be a successful battle in it. A democratic Iraq would be a major victory in the region. Even an Iraq run by a Mubarrak would help, by making the region more stable, and denying terrorists a base; and it would be much better for the people of Iraq. It gets US troops off Saudi soil, which can only help.

Here McArdle demonstrates magical thinking and the fallacy of sunk costs, something she's railed against repeatedly. She ignores any warning flags that would force her to question her desires and basic assumptions. And the hope of a nationalist ego-boost is seen as a reason to go to war, instead of a warning that she is being emotional, not rational.

I'm unconvinced by anti-war people screaming about screw-ups in the early weeks of the war, including the latest explosives flap. As a project manager, I know too well that when you operate in a tight time frame, no matter how much you plan, nothing goes according to plan. Something comes out of left field and makes half your planning obsolete, and the other half irrelevant.

Yes, we certainly believe that the projects she managed were often screwed up beyond belief, due to lack of foresight, procrastination and neglect of details. And we also note that McArdle flatly refused to listen to anyone whose ideology was different from her own, demonizing them so she could justify her actions. Hence the famous 2x4 post, which she tried to stuff down the memory hole, followed by running away and hiding from the consequences of her actions.

I think that the administration drastically underestimated the popular resistance to our invasion. ...I'm pretty sure we're making terrorist recruiting easier.

McArdle acknowledges that there will be consequences, which only makes it worse when she again justifies ignoring them.

But I'm not as sure as anti-war types that this makes us less secure. The biggest threat we face is nuclear or biological terrorism, and that's the kind of terrorism that requires cooperation from state actors. Moreover, right now at least, all the new recruits are fighting soldiers in Iraq and not civilians in America. That could change, of course, but the only existential threat we face is nuclear terrorism. And nuclear terrorism is constrained not by the supply of recruits, but the supply of nukes, which terrorists wanted long before 9/11. The administration's actions certainly haven't increased the supply of nukes, and they may have decreased them. But I would like to see the administration pay more attention to non-state actors.

In her ignorance, McArdle utterly ignores the realities of the fight against terrorism, depending on second-hand talking points to justify her erroneous decision. McArdle said she believed that Saddam Hussein had nukes because she would have had nukes if she were Saddam. It's that simple--her arrogance is so complete that she thinks she understands someone she could not possibly understand, as she is neither an Iraqi nor a ruthless dictator and knows absolutely nothing about either.

I think that retreating from Iraq would be a disaster. Even if it turns into a quagmire, I would far rather see us stay too long than bug out before we have to.

Tell that to the dead, whom McArdle did her best to diminish.

I think that George Bush has cost us a lot of goodwill in Europe. I am less convinced that Europe's governments left us much choice.

Knee-jerk nationalism rears its ugly head again; if Europe does something it is wrong, if America does something it is right. It's a easy and sloppy ego-boost, just like her ego-gratifying belief in the superiority of her "fellow" elite and vituperative swipes at liberals. It's tribalism, Mean Girl-style.

In the end, it comes down to how much risk the candidates will take. The Democratic policy on foreign policy risk has been pretty much the same since McGovern: they won't take any. They bug out at the first sign of casualties, and go in only when the foe is so tiny that we can smash them without committing ground troops.

The Republicans take risk. Bush took on a lot of it -- and with it, the possibility that something could go wrong.

What does the country need now? Someone risk averse, to shepherd us through, or someone who will take bold action and possibly land us in a disaster? I think a lot of people have concluded, from the fact that Bush's risky move has gone wrong, that risk aversion is therefore the superior strategy. But that doesn't follow. Jimmy Carter running right now would to my mind be unarguably worse than George Bush for all his screw ups. On the other hand, Bush I would certainly be preferable to Bush II.

The rewards for supporting authority are enormous, and the drawbacks of fighting it are innumerable. The same lies told to justify invasion of Iraq are being told to justify invasion of Iran; they have nukes and we must bomb them or they will kill us. But there is something greater than monetary reward, and much, much harder to combat: a need to find an external source of self esteem, through the meaningless exertion of power over perceived enemies.
Posted by Susan of Texas at 9:10 AM

If Megan was a project manager where nothing went as planned, she wasn't very good at her job. I've been on teams overseeing multi-million dollar projects on extreme time limitations; things go wrong, but most go as planned. I'm not surprised, though. This is someone who can't even mail wedding invitations out on time without turning it into a temper tantrum because she's not immediately accomodated.

It's so silly for her to compare her job as project manager to running a war. She doesn't know what it would be like but feels absolutely confident to opine anyway.

Megan & Friends believe the Corporation is the highest evolved form of life on Earth, and should be emulated by everyone rather than regulated or better yet, done away with entirely.

Corporations did screw up massively: and the government bailed them out. All normal and good so far as ArgleBargle's Owners are concerned.

It's bad enough that you misinform us constantly about your single area of specialization. (We said "specialization." Not "expertise.") But please, PLEASE spare us everything else.

Yours,
The American People