Megan McArdle On Elizabeth Warren: The Takedown To End All Takedowns 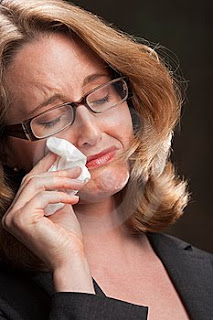 
At last, Megan McArdle has unleashed her Chicago Boyz mojo on Elizabeth Warren, offering what must be* Part II of her slapdown of the woman who would do the unforgivable--protect consumers from the bad faith of the financial industry. Let's look at her argument, for not since Jonah Goldberg wrote his Pulitzer-winning book Liberal Fascism has an argument been made in such detail or with such care.

You could simplify offerings--outlaw [any mortgages that are] faintly exotic. Negative amortization loans, of course, and anything with a balloon payment--but many people got caught out by more ordinary ARMs, so maybe those should go too. The less martial version of this thought is embodied in the "plain vanilla" default option that Elizabeth Warren, among others, has been pushing.

Damn! That's gotta hurt! It seems Warren doesn't like mortgage innovations like ARMs, for no reason whatsoever. And after McArdle told us all that fixed rate mortgages helped create the housing bubble!

Everything that ever disadvantaged someone is automatically assumed to be a terrible product feature that ought to be eliminated. That instinct is what most worries me about the new CFPA.

Doesn't Warren know that if banks aren't allowed to create ARMs, financial innovation will be destroyed and millions of mortgages will die horrible deaths? Doesn't the woman realize that the US mortgage market depends on the money made from balloon payments to finance more innovation?

McArdle saved her best for the comments, however, delivering the decisive blow to Warren's reputation.

#1 The "Plain Vanilla" option was voted down by the House. It wasn't in any of the bills.

#3 It wasn't even invented by Warren. It was invented by the other CFPB choice, Michael Barr.

I understand there is opposition to Warren on behalf of some folks here, but just as I am attacking those who are obsessed with her (mostly on the left), those who try to take her down should look at facts too.

It wasn't a "takedown", it was a statement--she likes the plain vanilla option--and where idd I say it was law?

Liking something and applying it, are two different things. She's not going to be nigh unstoppable. There are clearly going to be bureaucratic and regulatory restraints on anything she'd do. This would be one of them.

You are reading hostile intent into a declaration of fact; this is an idea that she supports. My later concerns about the CFPA aren't particularly related.

Ouch! How could Warren ever look the world in the face again after such a devastating attack?

McArdle promised to explain Warren's paternalism as well, but perhaps she is saving that for Christmas. We can hardly wait.

How in the world are you able to resist the easy shots?

I requires heroic effort to read every document.


I'm pretty good with paperwork, and I understand all the terms being used (not to mention the laws being referenced), and I find it impossible to keep track of it all mentally

Now, I don't really need seven days to calculate my APR, but I can't waive the provision, because otherwise, the naive would be too easily taken advantage of.

All the millions of years it took to eveolve self-awareness, washed away in a light drizzle.

The easy shots might detract from the bigger point, plus no matter how much stupid you cover, there's always more.

Most right wing supporters look and write and speak as stupidly as they actually are. Megan uses "the terminology" (according to my winger brother) and -almost- sounds like she knows the subject.

She just hates it when commenters pull back the curtain, because she's standing there stark naked.

God forbid she should get into talking about her expertise in exercise and weight loss too.

Of course, what "plain vanilla" means is that there will be a couple standard options that will be less regulated because they adhere to certain standards. Other mortgages can still be offered, but will have to operate within a more rigorous regulatory framework requiring that stuff be spelled out. Interesting is McArdle's whine on paperwork: one of the main goals of the "Restoring American Financial Stability Act" is to improve paperwork, by making it easier to understand and to "slim down paperwork".

Doesn't Warren know that if banks aren't allowed to create ARMs, financial innovation will be destroyed and millions of mortgages will die horrible deaths? Indeed, 80% of the mortgages in the world are ARMs. I mean, hypothetically if.

You're doing it wrong, anon. You don't say it's hypothetical until someone asks you where that number you just presented as a fact came from.

Only THEN do you say "it was hypothetical" in a condescending way, implying that only stupid people who come from stupid families wouldn't understand it. You have to find diverse and subtle ways to remind people that you're smarter than them by birth. Otherwise they may start thinking that the stupid things that you say aren't the product a superior, elite mind, but the lucubrations of a moron.

Fooled me there. I thought it was the real Warrenpocalypse.

A fixed rate (a reasonably low one) generally works better for the customer, and the bank still makes a ridiculous profit. So what's the problem?

Only a Galt-Cato fucknut could think that the financial industry is really about "innovation," or that "innovation" in the financial industry means anything more than figuring out "how can we screw our customers over even more?" Like Krugman's said, banking used to be the safe, boring profession, and it should be again. If bankers are providing a useful service and making a steep profit at it, that's more than enough for them. Micro-loans to the poor could be considered genuinely "innovative," but those really were devised by charities, not banks. As usual, Megan's pitch doesn't match what she's actually selling.

Go back an issue to health care reform – it's not just that McMegan is dumb and lazy, it's that she couldn't conceive of the fact that innovation isn't dependent on the free market. The free market will drive some innovations, but they tend to be narrow and immediate. Pure research typically requires some sort of far-sighted government funding. And oddly enough, while doctors would like to be well paid, they're generally not in the research business just for the cash. Some would like the fame and prestige from a breakthrough, but many more are driven by sheer geek curiosity, or the exciting idea that they might actually help their fellow human beings. Glibertarians can only really conceive of personal profit as a motivation, which is why they're so clueless about designing most systems and so ignorant of human nature.

Only a naïve simpleton could believe that McMegan isn't "hostile" toward Elizabeth Warren. (Yeah, and the vampires aren't hostile to Buffy, either.)

I don't think we're going to get another big post on Warren, since McArdle was so veeeeeery careful be neutral. Sigh.

She did the same thing once before--she promised us a post on authoritarianism and never delivered, even though I wrote a post saying how much I was looking forward to reading it.

Very well said, Batocchio. One of the biggest problems I have with capitalism is that it assumes the only motivation human beings have for doing anything is personal profit and greed. People like Megan who are completely lacking in any intellectual curiosity can't possibly understand that the motivation might just be as simple as the pursuit of knowledge or providing something useful to others. Megan doesn't need to research, because she's the product of an intellectually intimidating family, which naturally makes her the same (talk about revealing insecurities...what does intellectually intimidating even mean? I know there are people smarter than me, who know more about other subjects, but I don't find them intimidating, just better read in certain areas). The irony of her thinking is with that attitude, she couldn't be more boring, average, uninteresting, and so easy to dismiss. All the while believing herself to be among the elite. It's almost comedy.

The thing that keeps bugging me about her write-up is that the bill DOESN'T stop banks from offering all those "innovative" products, those products just have more stringent disclosure requirements. The only "innovation" disclosure shuts down is the "hey, let's cheat our customers by not really telling them clearly what they're signing!" God knows that's been a money-maker for lenders, but no real free-marketeer would ever support that sort of maneuver because that leads to a market that is not free; the question arises, then, why does Megan support it? Why also does she disparage the "plain vanilla" option, standard loan products all banks would offer IN ADDITION TO THEIR "INNOVATIVE" ONES so customers could actually compare apples to apples?