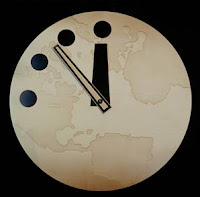 The nation is perched on the edge of its seat as we approach Day 6 of the Countdown To Doom, the day Megan McArdle will demolish Elizabeth Warren's claims of scholarship for once and for all.

On a fateful day nearly a week ago, Megan McArdle revealed her diabolical plan to unleash such a devastating critique of Elizabeth Warren that McArdle would destroy for all time any plans Warren had for wrapping her ideological tentacles around the innocent, wide-eyed Consumer Financial Protection Agency. Part 1 of her attack, Considering Elizabeth Warren, The Scholar, revealed that Warren was using what McArdle considered to be bad data, and that Warren's ideological dishonesty made her deliberately obscure important facts that would discredit her theories. This theory was quickly picked up and spread--but not fast enough!

This devastating post should have created a wave of distrust that would have drowned Warren in righteous fury, but sadly that did not occur. An angry mob of frothing ideologues went on the attack, maliciously and venomously pointing out that McArdle did not prove her statements. They said that she was the only one foolish enough to make this easily disprovable claim, her claims were refuted by the very evidence she used to support them, she used faulty logic, and she mislead by omitting data. But they'll get their comeuppance, oh yes they will! Any day now!

We will count down the days until McArdle unleashes Part 2, eagerly awaiting McArdle's detailed, fact-based, impeccably argued assessment of Warren's work and the twisty inner working of her tricksy mind. McArdle said on Day 4:

As I’m going to write in the next few days, the thing I don’t like about Warren is that she’s sloppy with data, and also that her mistrust manifests itself in paternalism. It’s one thing to think consumers would be better off without certain kinds of credit; it’s another thing to be positively certain that you’ll be making them better off by making such credit unprofitable.

How will Warren manage to worm her way out of such inexorable opposition? Grab some popcorn and a soda, put up your feet, and tune in to The Atlantic to see!
Posted by Susan of Texas at 8:48 AM

"It’s one thing to think consumers would be better off without certain kinds of credit; it’s another thing to be positively certain that you’ll be making them better off by making such credit unprofitable."

True; the second requires a major leap of faith to assume that capitalists are unable to find a different way of making a profit, helpless in the face of any action taken in support of social good.

In related news, all of the fast food restaurants in NYC closed immediately when they were required to post calorie counts with their menu. That BK that advertises "free internet" just up the block is a figment of my imagination.

Excellent. Can't wait. Apparently she's taking a mental health break. Don't know why. She seems not to have noticed that she doesn' t have perfect mental health.

No doubt McArdle is taking her time so she can do a thorough job and provide ample evidence to back up her claims.

The nation? Ha! The whole world is watching!

In other news, TBogg stole my line:

Or at least I think I came up with that "Our Lady of...", who's supposed to remember...