I Think We're Going To Need A Bigger Cookie Jar 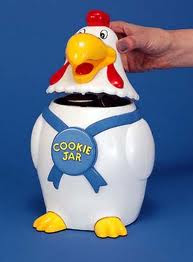 Tom Levenson has an elegant description of Megan McArdle's latest attempt to turn Elizabeth Warren into a pinata for the right to bash.

To do so she tries to impugn both the quality and integrity of Warren’s scholarship, and she does so by a mix of her usual tricks — among them simple falsehoods;** highly redacted descriptions of what Warren and her (never mentioned) colleagues actually said;*** and descriptions of Warren’s work that are inflammatory — and clearly wrong, in ways she seems to hope no one will bother to check.****

You can see the footnotes for quick examples of these sins. Here, I’ll confine myself to pointing out that in this post you find McArdle doing the respectable-society version of the same approach to argument that Andy Breitbart has just showed us can have such potent effect.

To see what I mean, you have to follow through two steps: how McArdle constructs her picture of a feckless, partisan and dishonest Warren — and then how she generalizes from it.

And indeed, when we google "megan mcardle elizabeth warren" we see that the right is jumping on the "feckless, partisan and dishonest" message that McArdle is pushing. The first thing we see is The Atlantic Wire post ("what everybody's thinking") that states:

First off, The Atlantic's Megan McArdle has studied Warren's scholarship and finds it deeply lacking in academic rigor. In one instance, McArdle argues that Warren inflated the number of household bankruptcies caused by medical expenses in order to justify universal health care. Warren analyzes society's ills in a way that suggests there is "no possible solution outside of a more left-wing government," McArdle writes. That doesn't lend itself to being a good agency head[...].

Their counterweight to their seconding of McArdle:

On the pro-side, is Nation editor Katrina vanden Heuvel who says Warren's wit and colloquial demeanor make her the perfect candidate[...].

"Colloquial manner" versus dishonest and biased. We wonder which version the right will pick up. From The Corner, who often quote McArdle:

The Atlantic Stacks the Deck [Ramesh Ponnuru]
Its website reviews the debate over whether Elizabeth Warren should head the new Consumer Financial Protection Bureau. On the con side it cites Megan McArdle, who "has studied Warren's scholarship and finds it deeply lacking in academic rigor." On the pro side there's Katrina vanden Heuvel, "who says Warren's wit and colloquial demeanor make her the perfect candidate." I'm inclined to side with McArdle, but boy is this not a fair fight.

Of course Business Insider and Instapundit link, as they always do. Joe Weisenthal:

Elizabeth Warren's Medical Bankruptcy Study Gets Demolished
Meanwhile, Meghan McArdle is writing a long, two-part post on Warren's career as a scholar and Harvard. McArdle takes a dim view of her research.

Heh. Note he misspells her first name. The link leads to this:

TARP watchdog Elizabeth Warren has played an important role in fighting abuses of the federal handout, but the knock on her is that she's too much of an ideological activist, and that she's in over her head in the role.

As we all know, whenever we are told what everyone else is thinking, those thoughts invariably are talking points that the right wants to disseminate.

Warren is a bankruptcy lawyer and Harvard professor, with a particular interest in how the financial system hurts the "little guy."

That's fine, and it's not a bad thing to look at how the maze of insurance and mortgages and all that stuff look to the person signing their name on the dotted line -- where they're getting confused, etc. That being said, a professor's work should strive towards some kind of dispassionate "truth", whatever that means.

And it seems in her latest work -- a study claiming that medical costs now account for a stunning 70% of bankruptcies, up from 50% last time she looked -- is just pure nonsense.

Megan McArdle (who you may know from dropping the hammer on Edmund Andrews) rips it to shreds, noting that what Warren ignores it that bankruptcies on the whole have come down (significantly) over the last 6 years, and then 70% of the new number would still be 50% of the old number, so even medical-related bankruptcies have been coming down.

Now, some might defend Warren and say, that, well if her numbers are correct, it still shows that medical costs are the dominant contributors to bankruptcy, even if they've fallen along with the total number of filings. That may be so, but it's not actually saying that much. Because the problem she's trying to address is bankruptcy -- the issue is the devastating financial impact from medical bills (not the same thing). The latter is definitely concerning. Bankruptcy is symptom. But by taking misleading bankruptcy numbers, she can overstate how bad the medical bills situation is.

McArdle also did a followup post here, which is worth reading, emphasizing just how significant the question is, particularly coming from the person who's also playing such an important role in the bailout.

The Washington Post political economy blog pairs someone from the Peterson "Institute" and McArdle with Robert Shiller and someone from The American Prospect, as if they all were on the same level.
The Wall Street Journal says in an article on Warren:

For those and other comments, Ms. Warren has drawn the ire of Wall Street commentators including the Atlantic's Megan McArdle and former bank analyst Tom Brown. The most-often repeated criticism is that her background, as a bankruptcy law professor with a focus on consumers, doesn't qualify her to comment broadly on banking.

Ms. Warren has made so many enemies inside and outside the Beltway, it makes one wonder if anyone is listening at all.

Economics of Contempt links to McArdle and states that they are glad Warren is being criticized. The Volokh Conspiracy also links and quotes McArdle's statement that Warren's data is dishonest, as do various small right-wing blogs. The talking point will be spread until the big media jump on it, and the conventional wisdom will be that Warren is shoddy and dishonest.

And McArdle will cash another paycheck, her rich reward for doing her part to destroy a political enemy and deprive herself and us of a tiny bit of leverage against overwhelming corporate control.

TBogg adds to the smackdown.

UPDATE: McArdle responds to Levenson, with typical erudition and grace.

Tee-hee! Some idiot snipped out a portion of my post in order to accuse me of--selectively reading someone else's work. http://bit.ly/9Wa79K
about 2 hours ago via TweetDeck

You almost feel sorry for her until you realize that she'd cheerfully garrote you and leave you by the side of the road if Jamie Dimon asked her to.
Posted by Susan of Texas at 8:17 AM

Megan McArdle (who you may know from dropping the hammer on Edmund Andrews) rips it to shreds, noting that what Warren ignores it that bankruptcies on the whole have come down (significantly) over the last 6 years, and then 70% of the new number would still be 50% of the old number, so even medical-related bankruptcies have been coming down.

Gosh, I wonder why bankruptcies on the whole have come down (significantly) over the last 6 years.

Actually, we're back to where we were right before the pre-act spike.

She blatently misrepresented Warren repeatedly in her critiques--Warren et al's study discusses the Act and most of her other complaints. But she knows most people won't read the source material (god knows she doesn't), so she says what she wants to say.

Thanks for the cookie, Susan! It's a hard fight, and we are outnumbered, but we do have an ace in the hole: McArdle herself, always in error, never in doubt.

Tee-hee! Some idiot snipped out a portion of my post in order to accuse me of--selectively reading someone else's work. http://bit.ly/9Wa79K

Tee hee, some idiot econ blogger who can't even figure out her calculator nor gracefully admit her errors when they're uncovered accuses Warren of being a dishonest, sloppy researcher.

"then 70% of the new number would still be 50% of the old number, so even medical-related bankruptcies have been coming down."

This is an argument that medical bankruptcies are A Major Issue, not that we should ignore them.

Just out of curiosity, what research publications has McMegan produced?

Won't somebody please think about the MEEEEEEEEEEE!!!!!

"Looks like Sherrod is going to be fine. It would be nice if all those falsely accused were rallied around in the same way."

Its sickening: the amount of power this vain, ignorant, sophomoric twit has in "financial opinion circles". A completely empty headed, empty hearted bitch, chosen by right-wing power brokers to spread a contagious miasma of lies and confusion to the public at large. A toxic, contaminated source point for spreading ignorance and hatred to further poison our country, and hasten its decline into a fascist oligarchy.

The only consolation is that when her half-assed lam-o services are no longer needed (tee-hee) she'll be thrown on a midden with all the other right-wing goons who cheer-led or actively assisted the ruin of our country.

I'm getting the sinking feeling that a White House that is "not inclined to face a tough confirmation fight" or some such nonsense will use the lockstep condemnations of Warren from the idiots on the right as justification for not nominating her. And all the dirty fucking hippies will complain, and again we'll hear the sad refrain, "Why don't you stop all this bashing of Obama? He's doing the best he can, all the criticism from the left is just going to weaken him..." yadda yadda yadda. Sigh.

Meegan and research do not belong in the same sentence together.

The irony of somebody who believes that selectively quoting her blog post is the same thing as selectively reading it, referring to another as an idiot....

Thanks, those are good links.