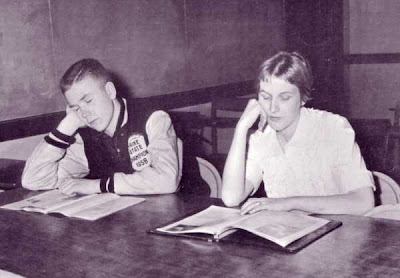 Before the unholy decade of the 1960s, students dressed in formal wear like little ladies and gentlemen and always paid attention to their lessons.

Townhall and talk radio dolt Dennis Prager has some new ideas for schools. If he had his way----.

If you wish to affirm an ethnic, racial, or religious identity through school, you will have to go elsewhere. We will end all ethnicity-, race-, and non-American-nationality-based celebrations.

Woops, there goes Christian celebrations like Christmas and Easter holidays.

There goes Columbus Day and Thanksgiving.

I will not authorize clubs that divide students based on any identities. This includes race, language, religion, sexual orientation, or whatever else may become in vogue in a society divided by political correctness.

There go all the foreign language clubs. My Spanish club's annual trip to La Hacienda? Verboten!

Your clubs will be based on interests and passions, not blood, ethnic, racial, or other physically defined ties. Those clubs just cultivate narcissism — an unhealthy preoccupation with the self — while the purpose of education is to get you to think beyond yourself. So we will have clubs that transport you to the wonders and glories of art, music, astronomy, languages you do not already speak, carpentry, and more.

But you got rid of the foreign language clubs. Does this mean that only non-Hispanics can have a Spanish club? And isn't art and music kind of gay? You don't want gay kids getting together, do you Dennis? And astronomy--isn't that kind of atheistic? Carpentry? Tools are expensive; who's going to pay for that? Not us conservatives. Just readin', writin', and 'rithmitic for us.

Third, because I regard learning as a sacred endeavor, everything in this school will reflect learning’s elevated status. This means, among other things, that you and your teachers will dress accordingly. Many people in our society dress more formally for a meal at a nice restaurant than they do for church or school. These people have their priorities backwards. Therefore, there will be a formal dress code at this school.

Most schools have dress codes. Many public schools require uniforms. But hey, if Prager thinks he can force the parents of his students to dress them in suits and ties or dresses and pantyhose, he can go for it.

Fourth, no obscene language will be tolerated anywhere on this school’s property — whether in class, in the hallways, or at athletic events. If you can’t speak without using the F-word, you can’t speak. By obscene language I mean the words banned by the Federal Communications Commission plus epithets such as the N-word, even when used by one black student to address another, or “bitch,” even when addressed by a girl to a girlfriend. It is my intent that by the time you leave this school, you will be among the few of your age to distinguish instinctively between the elevated and the degraded, the holy and the obscene.

Torture--hunky-dory. The f-word--obscene and profane. Let's keep our priorities straight.

Prager's mythical school sounds like it would be a sure-fire success. Once you make sure your students all look and sound like a 1950s picture book, every other problem melts away. But at least Prager isn't trying to get rid of public schools altogether, like all the gullible people being paid by major corporations to eliminate the corporations' property taxes. Those conservatives would be perfectly happy paying five grand or more per child per year to educate their kids, and pay for private police to protect them from the bored, angry, uneducated and unemployed masses that they can't wait to unleash upon the world.
Posted by Susan of Texas at 3:59 PM

"Those conservatives would be perfectly happy paying five grand or more per child per year to educate their kids, and pay for private police to protect them from the bored, angry, uneducated and unemployed masses that they can't wait to unleash upon the world."

Exactly. Nevermind those traits of compassion, empathy, kindness, and others alleged to the christian faith most of these folks profess (but seem to be completely bewildered by). They get so hepped up on their anger highs that they lose common sense. Even if they don't give a shit about anyone else but themselves, you'd think they would have a least a little bit of sense that you don't want a huge chunk of society feeling disenfranchised.

They really are self-destructively clueless. I suppose they figure one of their leaders will come up with a Final Solution to the problem.

Five grand? Try 30 grand, more like it. For Kindergarten-8th grade.

The thing that makes me laugh, about that column, is that logically what he wants is exactly what the courts just gave us in the christians vs. decadent heathens case: no exclusive clubs on campus that are paid for with student fees or receive school endorsement. So: Pagans can join Christian clubs, gays can join christian clubs, and christians can join--oh, hell, they can join muslim clubs and try to prosletize. The only thing is that I suppose the way he's worded it the only people who can't join a club on a certain topic are those who actually know, or care, about that topic. Not punitive enough for him.

Still, all wretching and joking aside I only wish liberals were as determined to educate our diverse population as Conservatives pretend to be. We actually need some serious thought going in to how we are going to forge a good, long term, democratic/liberal/left consensus on things like taxation, education, and the military. We can't be congtent to just leave it up to fate and demographics. Long term the far right/white pride/conservative block is doomed. But their actual policies really aren't--there's no guaranteeing that America's eventual non white majority will be any more liberal, or enlightened, than our old retrograde white majority.

Wow. I went to a school like that, a girls' boarding school. We wore uniforms, went to church on Sundays (Muslims, Hindus and Jews were exempt but not atheists or agnostics), prayers at assembly every morning, grace before every meal, stand when the teachers walk into the room, chewing gum and makeup forbidden. Swearing of course forbidden too. We broke the rules at every chance we got, because whatever fun we wanted was an irresistible draw, and we all swore like Marines. I'm not sure how Prager plans to motivate his imaginary students to follow his regime. I don't imagine the threat of his disapproval would elicit anything but barely smothered giggles. But he seems like a person who is more comfortable holding forth to an audience of stuffed toy animals.

We actually need some serious thought going in to how we are going to forge a good, long term, democratic/liberal/left consensus on things like taxation, education, and the military.

Sometimes I wish these people could have the world they longed for. Force the wife to quit work and stay home to teach the kids and take them to church (or be fined, like colonial America). Send the dad to work in a dangerous, unregulated environment for minimum pay. They always think they'd be the master, never the servant.

I think Democrats already know what they want, they just don't have the power to get it. We want to help the poor, so they can help their children be successful in school and life. We want the military to be used for defense of the nation, not defense of corporations. We want everyone to have decently paid jobs, so they can pay taxes, save money and start businesses, support their kids, and be good, voting citizens.

Instead we hand over all our money and power to corporations, and wonder why our lives are so unsatisfying.

Japanese schools have kids wearing uniforms and behaving with strict propriety and reserve. And Catholic schools.